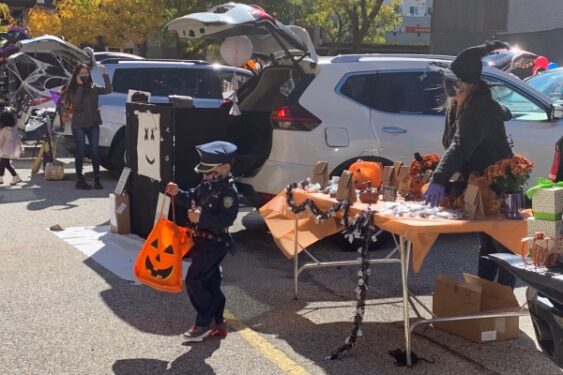 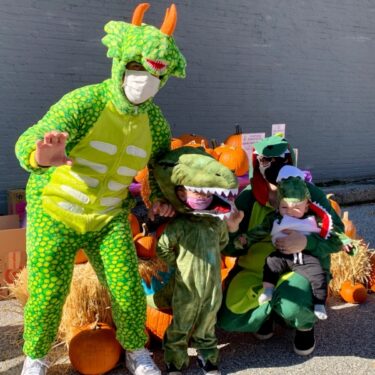 This family's Halloween costumes were was a dino-mite hit. 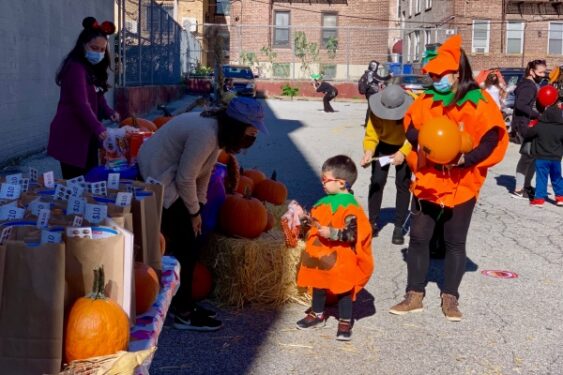 ICCA nursery student Paul Kim trick-or-treats and picks out his own pumpkin. 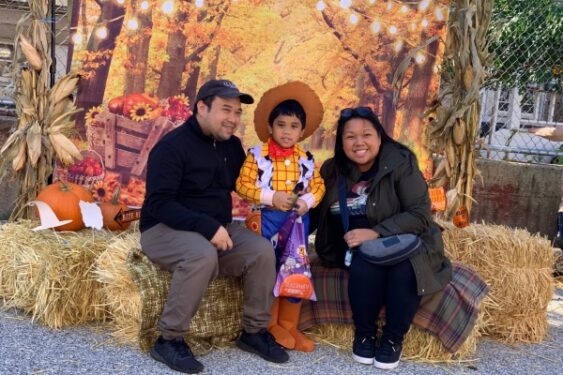 The Marasigan family takes a quick photo before continuing to trick-or-treat. 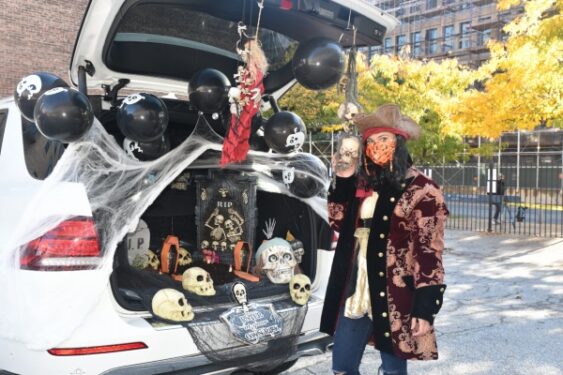 ICCA parents got extremely creative when decorating their vehicles' trunks for the Halloween event, like this spooky skull-themed one above. (Photo: Lorraine D. Heaney)

ASTORIA — With Halloween festivities changing due to the pandemic, the Home Academy Association (HAA) at Immaculate Conception Catholic Academy (Astoria) made sure their students could still have a semi-normal experience. So, they came up with the idea to hold an outdoor “Trunk-or-Treat” event that involved dressing up in masks and costumes, plus trick-or-treating at tables in Immaculate Conception’s church parking lot.

“We wanted to offer our students and their families a safe and socially distant way to not only celebrate the holiday but to have something familiar to look forward to, despite the current circumstances we’re facing,” said parent Shaun Caruana, who spearheaded ICCA’s first major event of the academic year.

On Oct. 17, 120 costumed children came during timed intervals, according to grade level. Thirty-five parents, staff, and faculty members volunteered their time to hand out pumpkins and distribute 1,200 goodie bags filled with toys and candy. HAA members packed the treats in individual Ziploc bags and brown paper bags, so that the children wouldn’t grab them by the handfuls, as is usually done in a non-COVID-19 world. The HAA also decided to hold “Trunk-or-Treat” two weeks in advance, so that families could enjoy their own Halloween traditions and festivities on the holiday itself.

Local landscaper Gavin Yard Design and Home Depot Store #1255 (on Northern Boulevard) donated the pumpkins for the students to take home, decorate, and carve. Ten families also parked their cars in the lot and decorated their opened trunks according to themes — including “The Avengers” and “The Nightmare Before Christmas.”

“I’m amazed at how inventive the parents got for this event,” said Msgr. Fernando Ferrarese, pastor at Immaculate Conception, as nursery-aged students began to go table to table for treats. “And how wonderful it is for the school community to abide by the state guidelines and have fun. It’s hard to do both at the same time, but we’re doing it!”

“The HAA has done a remarkable job in planning and executing what they envisioned,” he told The Tablet. “It really was well-done — better than I imagined.”

Maricel Marasigan, whose first-grade son dressed up as Woody from “Toy Story,” noted this was a nice change from the school’s annual Halloween party.

“This was definitely fun,” Marasigan said after her family took pictures on hay bales with an autumn-themed backdrop behind them. “I’m glad the HAA came up with something different for the kids and that it’s socially distant.”

Parent Ashley Easteadt — who worked alongside Caruana, Caruana’s wife Melanie, and Marlene Vitale — was happy that the HAA pulled off the event on a sunny day.

“For something we’ve never done before, it’s a success,” Easteadt said three hours into the event, as she continued to check in attendees at the welcome table. “It’s really about the kids and our community because this might be the only time they can still celebrate Halloween.”

Given the strong showing, Caruana said the HAA is strongly considering making this an annual event — with or without COVID-19 in the picture.

“All we’ve gotten is positive feedback, and it’s been an exceptional day so far. You could see the kids smiling underneath their masks and enjoying themselves,” he said after stepping up away from filling superhero-emblemed balloons with helium by his “Avengers” car. “I’m looking forward to next year. Hopefully, this will be bigger and maybe can be more community-based with involving others from outside the school.”

Approximately $1,700 was raised from raffles and pumpkin, ticket and car sales.