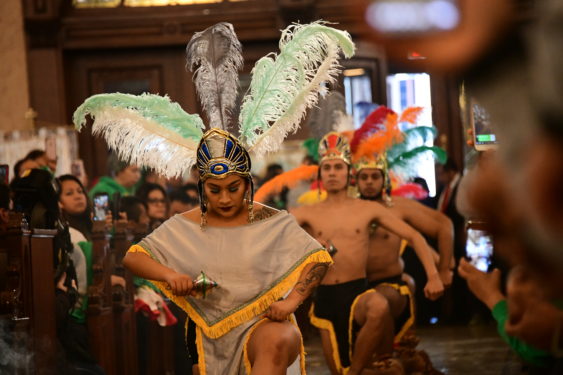 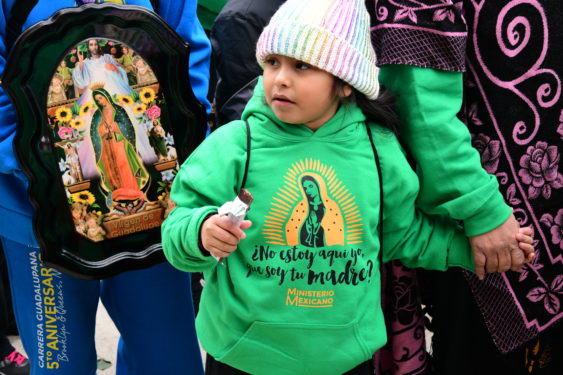 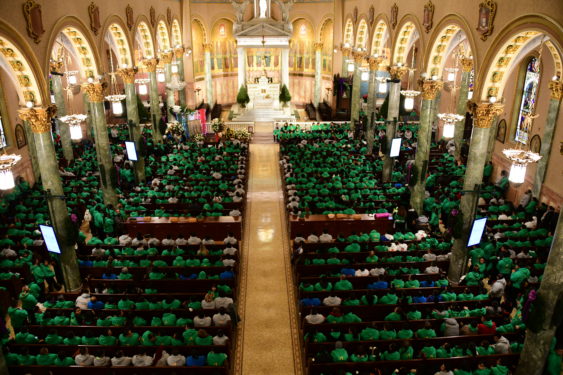 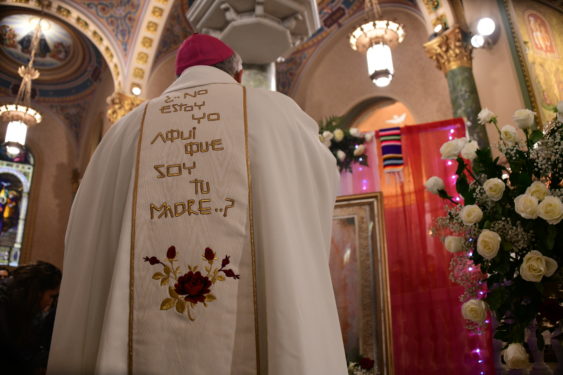 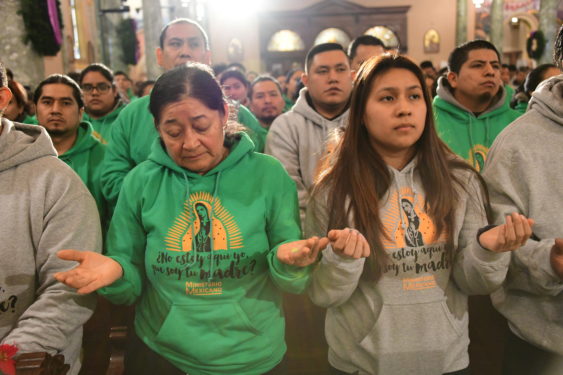 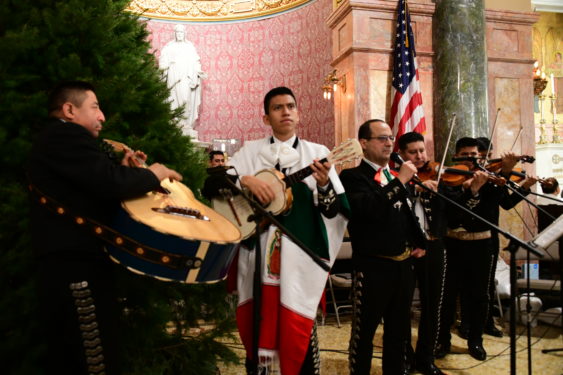 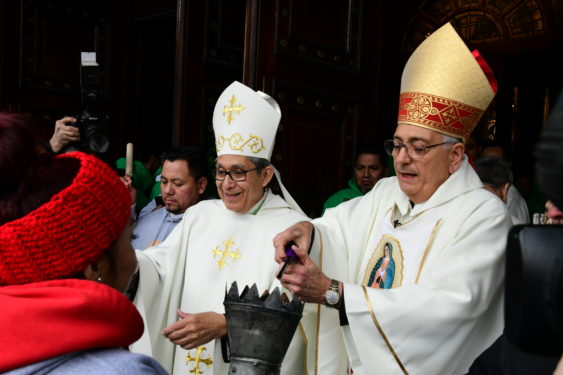 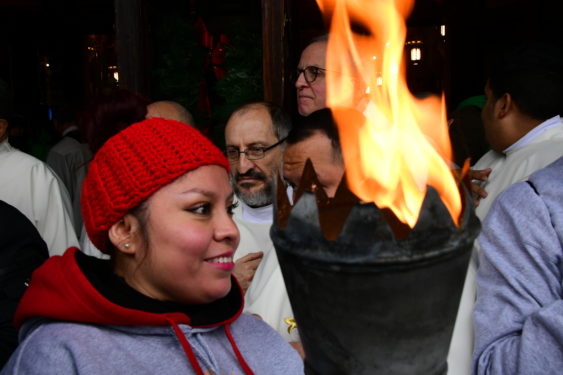 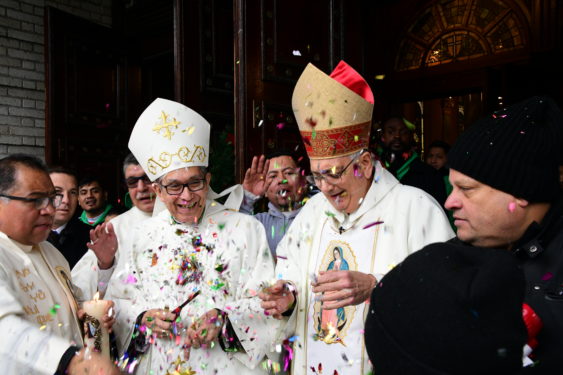 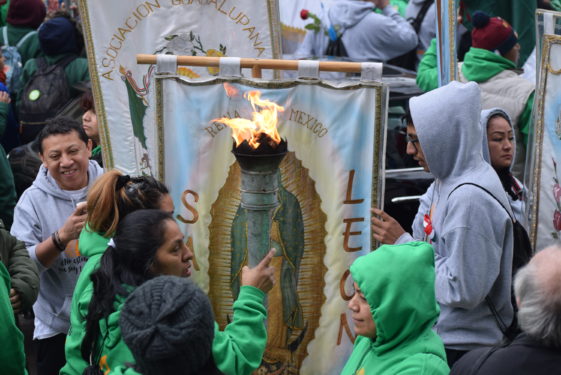 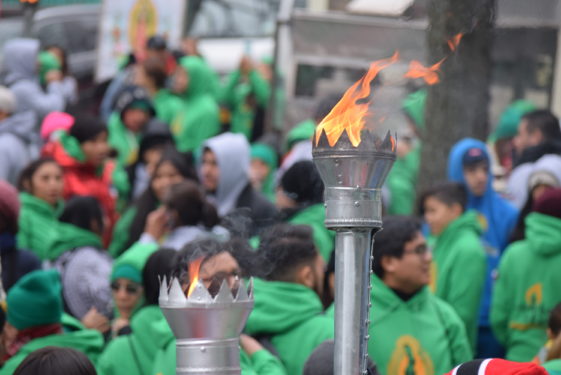 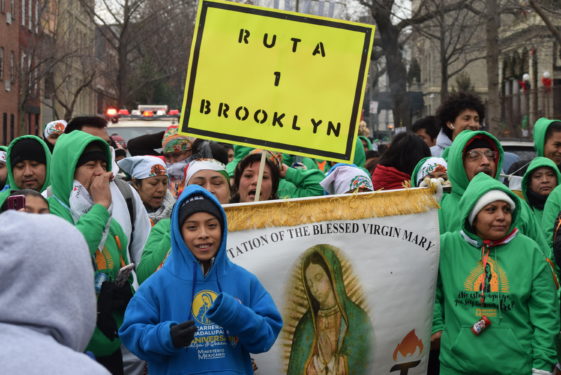 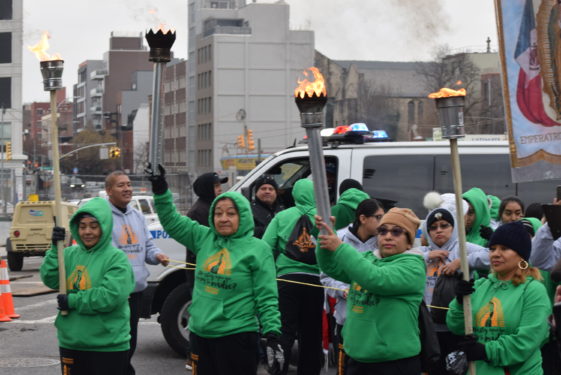 In the cathedral named after the patron of families and the Universal Church, during the colorful Mass in honor of Our Lady of Guadalupe, Bishop Nicholas DiMarzio expressed his commitment to fight for fair and comprehensive immigration reform.

His words were cheerfully and gratefully received by the more than 2,500 pilgrims from the 36 different parishes of Brooklyn and Queens who came to the Co-Cathedral of St. Joseph in Prospect Heights to participate in the sixth annual Pilgrimage of the Torch, called “Carrera Guadalupana,” organized by Father Jorge Ortiz and the Mexican ministry.

The festivities kicked off early in the morning on Dec. 12, with the arrival of a dozen trucks decorated with the image of the Virgin.

Pilgrims were greeted in the co-cathedral by a group of mariachi. After the official welcome by Father Ortiz, the Folkloric Ballet Nueva Juventud, dressed in indigenous costumes, performed ancient tribal dances honoring the Blessed Virgin Mary, patron of Mexico, Empress of the Americas.

During the hour prior to Mass, the congregation, made up in large part of youth, listened to a catechetical talks by María Concepción Castillo, guest speaker from Mexico, and a vocational exhortation to the religious life by Father Jason Espinal, a young priest of the dioceses.

Next were the traditional mañanitas to the rhythm of the mariachi and a second dance of the folkloric ballet.

At noon, Bishop Nicholas DiMarzio presided over the Mass, which was concelebrated by 20 priests and deacons of the diocese. Auxiliary Bishop Octavio Cisneros, the homilist, spoke about the symbolism and importance of this Marian apparition for the evangelization of the Americas and the singularities of this devotion that began with the appearance of the pregnant Virgin Mother to the indigenous Juan Diego on the hill of Tepeyac, Mexico, in 1531.

Citing St. John Paul II’s “Ecclesia in America,” Bishop Cisneros recalled the importance of the perfect Virgin in evangelization: “And America, which historically has been and is a melting pot of peoples, has recognized ‘in the mestiza face of the Virgin of Tepeyac … in Holy Mary de Guadalupe … a great example of perfectly inculturated evangelization.’”

“Maria has the face of everyone. Maria does not have the face of an indigenous or European, but mestizo. She expresses the unity of all peoples,” said Bishop Cisneros.

Her role is central in the Catholic faith, inviting all to carry the message of her Son, the bishop said, because Mary is Christocentric by nature.

Bishop Cisneros also remembered the words of Msgr. Eduardo Chávez, postulator of the cause of St. Juan Diego and a Guadalupe apparition expert, when he said that what happened at Tepeyac “is not so much an apparition of Mary but an encounter with Jesus Christ.”

“This day we celebrate that Mary appeared almost 500 years ago now to a Mexican Indian, starting this devotion to Our Lady of Guadalupe,” said Bishop DiMarzio.

A few minutes after the end of Mass, the bishops blessed the torchbearers and lighted the torch symbolizing the light of Christ that each of them, along with their communities, took back to their parishes.

Contributing to this article was Emily Drooby.