Despite situation going from ‘bad to worse,’ there are signs of hope

PROSPECT HEIGHTS — With escalating gang warfare and political instability in Haiti, one could forget that 2,248 people died a year ago when another earthquake ravaged the nation’s southern peninsula.

The 7.2 magnitude quake on Aug. 14, 2021, damaged or destroyed 220 Catholic churches or chapels, including the historic Cathedral of St. Anne in Anse-à-Veau.

Catholics and their clergy had planned a celebration to mark St. Anne’s 300th anniversary as a parish. Renovations included a donation of benches and a bell from the Diocese of Brooklyn’s Office of Patrimony.

The disaster rendered the historic cathedral unsafe but not unfixable. A year later, engineering reports indicate the repair costs will exceed $3 million. Father Louis Merosne, the pastor, said that money is not yet in hand.

“Thank God we don’t have to demolish the cathedral,” Father Merosne said in a telephone interview. “That would be heartbreaking because it has a wonderful heritage among our people, and not just Catholics.

“But the price of everything has gone up because of the insecurity.”

Urban gangs prey on any person or organization with cash value. Revenue streams include kidnappings for ransom and intercepting delivery trucks loaded with relief supplies that are resold on the black market.

“Things can’t get from Port-au-Prince to our area,” Father Merosne said. “The gangs have blocked the roads completely. Because of that, the cost of wood is higher, and rebar costs more. Cement costs more, and food costs more.

“There is fuel, but not at the pump. People are getting it somewhere and selling it on the streets for about two or three times more than the normal price.”

The gangs also control the availability of life’s most basic necessities, including water. More women are resorting to prostitution, not just for money, but for actual food scraps to feed their families, according to a recent report from the United Nations. 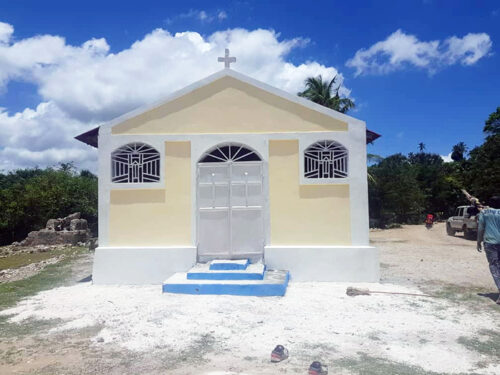 Thousands of innocent bystanders have died in the crossfire of rival gang shootouts, including children. Some victims were recently executed and set ablaze, the UN reported.

The military and law enforcement struggle to quell the chaos. Meanwhile, the government has yet to recover from the assassination of President Jovenel Moïse just five weeks before the earthquake last year. 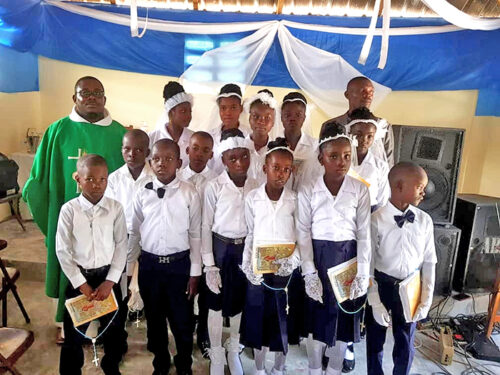 Many Haitians decide to leave the country following the migration of refugees from a similar earthquake in 2010. Thousands of those people made their way to the U.S. border last summer but were stopped at refugee camps along the Rio Grande in Texas. Some received asylum, but many others were sent back to Haiti — even if they had fled the country long before for other locales, such as South America.

The UN’s International Office of Migration recently reported that 2022 repatriations to Haiti as of June involved 19,099 people, which is nearly the total for all 2021 — 19,629.

The U.S. Coast Guard has reported that about 700 people were intercepted or rescued in the Florida Straits in 2021. The perilous migration continued this summer. Just two weeks ago, the U.S. Coast Guard rescued 300 Haitians from a rickety sailboat off the coast of Key West, Florida.

“The situation has gone from bad to worse,” Msgr. Pierre said. “Still, there is hope. What amazes people is to see the way the Church is functioning. People are (at Mass), praying, and celebrating, holding close to one another, and expressing their hopes for the future.”

To that end, the group From Here to Haiti, based in Queens, is trying to help numerous small rural churches or chapels recover from the destruction. Its founder is Patricia Brintle, an artist who grew up in Haiti. She explained the importance of vibrant Catholic churches in the countryside.

“The largest edifice in these communities is usually a church,” Brintle said. “So, this is where they come if there is a meeting to be had or if there is any kind of trouble, regardless of the denomination.”

Medical missions often partner with these churches, and people will start lining up for help the night before the doctors and nurses arrive, Brintle said.

“Very often, school is held in the church,” she noted. “So what did they do? They turn the benches around, and then they hold classes to serve the children of the community.”

An estimated 2,000 Haitian Catholics worship in Brooklyn and Queens, reported the Diocese of Brooklyn, and about 25 parishes celebrate Mass in Haitian Creole each Sunday. Several groups, like From Here to Haiti, assist their loved ones back home.

But Brintle confirmed that gang-generated turmoil hampers her group’s efforts.

“It makes my work much more difficult,” she said. “If you have building materials coming from the capital, they are stolen en route,” Brintle continued. “And so, first of all, you have to trust the people that you’re working with — people who know when to travel.”

Still, the resilience of Haitians inspires Brintle to continue to help them. She noted that one church, St. Elisabeth in Borga, has been repaired. The parish held a first Communion there a few weeks ago.

Father Merosne noted his parishioners have not missed a Mass since last year’s quake. While the cathedral remains empty, services have been held outdoors, weather permitting, or in a temporary structure with a metal roof.

Even the first Sunday after the quake, people came to Mass in their best clothes, he noted.

“Their faith is not bullied or shaken out of them by the earthquake. Maybe it is even a little stronger.”

Brintle called the people’s faith, “nébranlable” which is French for “unshakeable.”

“It is so solid,” she said.Msgr. Pierre agreed.

“That is what I mean when I say hope is alive,” he said. “I think this is what still holds the people together around the country.”

The earthquake relief efforts continue in Haiti. Here are some of the ways you can help:

** Msgr. Pierre Andre Pierre of the Center for the National Haitian Apostolate suggests partnering with charitable groups with high success rates in the country, such as Caritas: caritas.us/project/caritas-program-in-haiti