This site uses cookies to store information on your computer. By using this site, you consent to the placement and use of these cookies. Read our Privacy Policy to learn more. ACCEPT
Skip to content
MANHATTAN — Two longtime conservative voices in New York City tore into each other on March 31, in a raucous two-hour debate over who should be the Republican Party’s nominee in this year’s election for mayor.

77 WABC radio hosted the event and carried it live at WABCradio.com.

Sliwa, the founder of the Guardian Angels citizens street patrol, pounced first. He called Mateo a “de Blasio Republican,” accusing him of raising money for the controversial two-term mayor, a Democrat.

“You raised money for him, straw-purchased donors, which is illegal,” Sliwa charged. “You helped elect the man. Then you watched him destroy this city that I love, and everyone in this room loves.”

Mateo, founder of the New York Federation of Taxi Drivers, fired back angrily.

“Curtis, shame on you,” said the Dominican-born Mateo. “I’ve known you 45 years, and I’m ashamed of what you just said because you’ve lied. It’s fake news.”

Sliwa was referring to a 2016 fundraising scandal in which Mateo admitted he raised campaign money for the mayor but funneled it through an unemployed Brooklyn woman, which he hoped would help her get a job. Otherwise, he said he detests de Blasio.

State and federal prosecutors investigated a possible illegal “straw” donation in which a person uses money from another person to make a political contribution in their own name. Mateo countered that the Brooklyn-born Sliwa concocted fake publicity stunts to promote himself and the Guardian Angels. Sliwa did not directly respond to the charge during the debate, but he has publicly admitted in the 1990s to several hoaxes.

Other Republicans on the primary ballot are Sara Tirschwell, an investor and distressed financing advisor, Adam Oremland, a lawyer, and perennial mayoral candidate Abbey Laurel-Smith. The winner of the GOP primary will face nominees from other parties. A crowded field of around two dozen Democrats are vying for their party’s nomination.

Bill Pepitone, a retired New York police officer and a registered Republican, is the nominee for the Conservative Party of New York State. He also has the endorsement of the Conservative Party’s organizations in all five boroughs. With no opponent in his party’s primary, Pepitone has a clear path to the election-day ballot in November.

Mateo and Sliwa were the only candidates in the debate because they garnered front-runner status via their endorsements.

Mateo won the backing of the Republican parties of Manhattan, Bronx, and Queens. Sliwa has endorsements from GOP parties of Staten Island and Brooklyn. 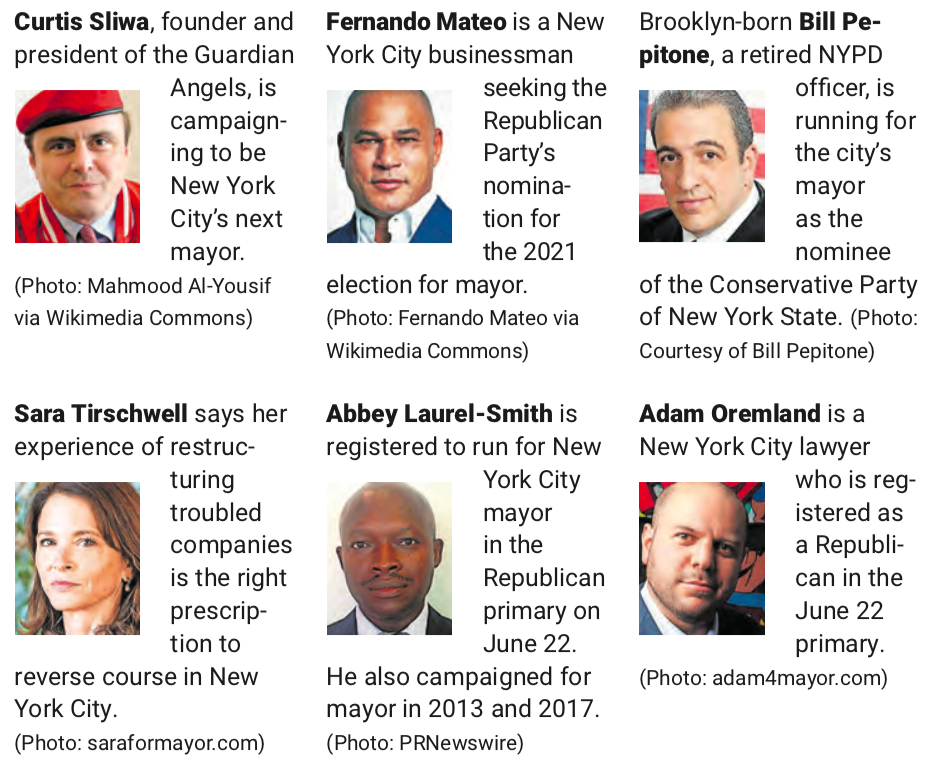 They did not differ much on other issues, including the economy, public safety, and education.

Both candidates blamed de Blasio for allowing violent crime to grow over the past year by telling police officers to “stand down,” especially during the last summer’s demonstrations over the killing in Minneapolis of George Floyd while in police custody.

Mateo said he believed most protesters behaved honorably, but rioters infiltrated the demonstrations to loot, break, and steal. Sliwa said he stood with the Guardian Angels against the violence and suffered a broken jaw.

The candidates pledged to restore morale among the rank-and-file police officers. Both favored reforming the controversial Anti-Crime Unit and said it had effectively taken illegal guns off the streets. They also supported a renewal of the “Broken Windows” campaign of former mayor Rudy Giuliani, which deterred violent crime, with a top-down approach to battling all crimes, including vandalism, petty theft, and vagrancy.

Reducing crime would help clear the way for the city’s economic recovery from the pandemic, the candidates said.

Mateo, who has also represented bodega owners, said he knows the pain small business owners face. He said he would urge the return of wealthy entrepreneurs who left the city to find more favorable business climates.

“I would do it by cutting taxes, not increasing taxes,” Mateo said. “I would welcome back the rich, making sure that they are part of the fabric of New York. I would make sure that we engage the rich and make sure that corporations and small businesses are able to create jobs and opportunities for kids.”

Sliwa said businesses must be allowed to reopen to recapture their vibrancy.

“If you go down 42nd Street, 80 percent of the facilities are abandoned,” he said. “There’s absolutely no activity. In fact, there’s more activity in downtown Buffalo at midnight than in areas in Times Square. And yet, they provide 15 percent of the economic contributions to this great city of ours. It gives $5 billion in taxes. It has 46 hotels and 41 theaters.

“We got to completely open it up.”

Likewise, Sliwa said schools must be reopened. He took a shot at de Blasio’s handling of school closures during the COVID-19 pandemic. He said private schools have shown they can open safely.

“The mayor of the city of New York must open up all the schools,” he said. “The Catholic schools and the parochial schools have not had problems with this pandemic.”