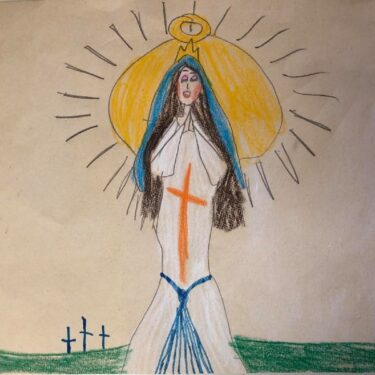 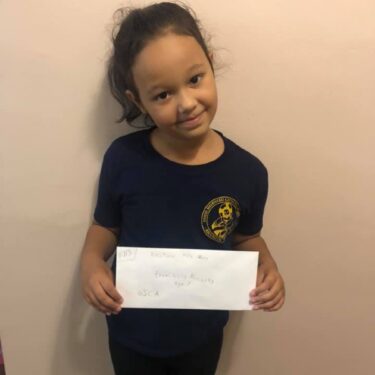 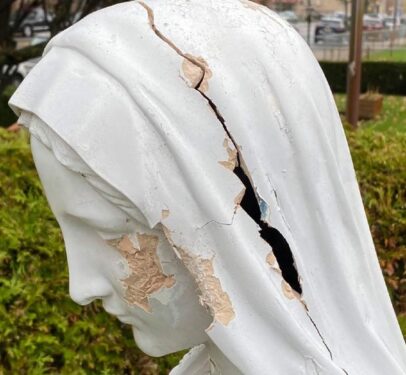 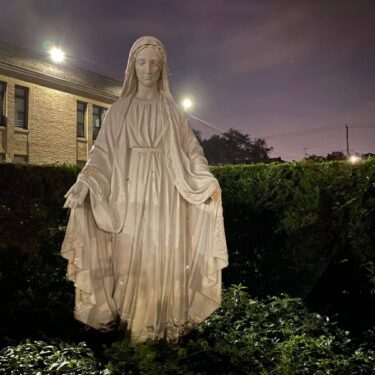 Father William A. With, pastor at Resurrection, hopes to restore the Blessed Mother statue that has been on the grounds for the last 40 years. Photo: NYPD Holy Name Society, Twitter.

GERRITSEN BEACH — Lucy Moriarty, a second-grader at Good Shepherd Catholic Academy, wanted to do something when she heard a statue at Resurrection Roman Catholic Church was vandalized.

The church’s Blessed Mother statue, which has been on the grounds for the last four decades, was found damaged on Oct. 19. Mary’s left hand and right fingers were broken off, a portion of the left side of her face was desecrated, and her head had a large crack.

Since her family are active parishioners at Resurrection, Lucy grabbed her crayons and markers to make a difference.

“My daughter was so sad to hear about the damage to our Virgin Mary statue,” her mother Denise posted on Facebook. “[She] drew some pictures and ‘sold’ them to raise money to help get her repaired!”

Her artwork raised $150, which Lucy personally delivered to Father William A. With, the pastor at Resurrection. Father With said Lucy’s visit was unexpected and that her donation was “overwhelming.”

“I was very much touched and moved to see that this little one cared so much and thought of our Blessed Mother,” he told The Tablet. “I thought of the quote from Scripture [Matthew 18:3] — ‘Amen, I say to you, unless you turn and become like children, you will not enter the kingdom of heaven.’”

And the seven-year-old isn’t the only one who has collected money to help. The local Knights of Columbus Council #5989 also launched a fundraiser on Oct. 21, raising more than $2,500 to fix the statue, with any extra funds going towards the church.

“This kind of took off on its own, but it shows people’s love for the Blessed Mother and for that shrine where they often stop to pray when the church is closed or locked after-hours,” Father With said. “I hope to restore the statue in some way, as well as add more security.”

This desecration is the latest in locally documented acts of vandalism since the summer. On July 10, an individual spray-painted “IDOL” onto a 100-year-old statue of the Blessed Mother outside of Cathedral Prep School and Seminary in Elmhurst, Queens. On Sept. 11, a man climbed over a fence outside the Shrine Church of Our Lady of Solace in Coney Island and threw a statue of Our Lady of Guadalupe onto the sidewalk. That statue, which had been at the church for three years, sustained damage to the face, hands, and base.

Anyone with information is asked to call the NYPD’s Crime Stoppers Hotline at 1-800-577-TIPS (8477) or submit tips at https://crimestoppers.nypdonline.org/.