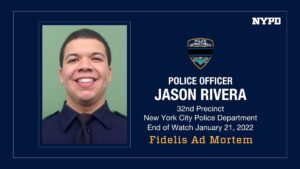 Rivera was killed by a gunman while responding to a domestic call in Harlem on Friday night.

Rivera’s partner Wilbert Mora, 27, who was also shot by the gunman, remains in critical condition at Harlem Hospital.

Both officers were a part of the 32nd precinct — headquartered on the same block as the shooting, which took place at 119 W. 135th Street, less than a quarter-mile away.

Pat Lynch, the president of the Patrolmen’s Benevolent Association — the NYPD’s largest union — stressed on Saturday the importance of the public attending Rivera’s services to show solidarity with the NYPD.

“The public has to come. The public has to send a message to anyone that dares to harm a New York City police officer,” Lynch said. “Not here, not now, not today, not to us. We are humbly asking you to come out and help us.”

Donations can be made to “Fund the First,” a crowdfunding site that hosts efforts to raise money for first responders.

Rivera, a native of Washington Heights, was a married father of one who joined the NYPD fourteen months ago.

In a letter Rivera wrote to his commanding officer while at the police academy he details that he became a cop to have a positive impact on the city where he grew up.

“Growing up in New York City I realized how impactful my role as a police officer would be in a chaotic city of about 10 million people,” Rivera wrote in the letter, obtained by News 4 New York. “I know that something so small as helping a tourist with directions, or helping a couple resolve an issue will put a smile on someone’s face.”

His desire to have a positive impact and help others began well before he joined the force. In one of Rivera’s old Instagram posts from 2017 that is now circulating online, he gave a motivational speech to high school freshman at his alma mater Washington Heights Expeditionary Learning School.

“I want to motivate you. I want you all to hear my voice and know that you’re going to get through it,” Rivera said in the video, filmed in 2017 after he graduated. “You have to put in the work. You have to put in 100% effort.”

Keechant Sewell, the police commissioner, described Rivera as a “son, husband, officer and friend” at a news conference on Saturday at the hospital where the two officers were taken.

In a television interview on Sunday Adams, who is a retired police officer, called on help from Washington D.C. to stop the “constant” flow of firearms to New York City.

The police department is doing their job taking thousands of guns off the streets, yet each time you take a gun off, there’s a constant flow of new guns coming here,” Adams said.

“And if we don’t coordinate to go after those gun dealers that are supplying large cities in America, such as New York, we are losing the battle, and the federal government must step in and play a role in doing so,” Adams continued.

Friday’s incident happened around 6:30 p.m. when Rivera, Mora and a third officer responded to a call from a woman who said she was fighting with her son.

When they arrived at the apartment they were met by the woman and a second son. The woman then said the son that she was fighting with was in a bedroom at the end of the hall, according to James Essig, the chief of detectives, who gave an account of the events to the New York Times.

As Mora and Rivera approached the room, Lashawn McNeil, 47, opened fire at the officers. McNeil then tried to leave the apartment, but was shot in the arm and head by a third officer, Essig said. McNeil survived the incident, but on Monday, died at a Harlem Hospital.

Mora joined the department in 2018. Cardinal Timothy Dolan of New York visited him at the hospital on Saturday.

“Our hearts are broken as we pray for the families of 22-year-old NYC Police Officer Jason Rivera, who died in the line of duty last night and gravely injured 27-year-old Officer Wilbert Mora,” Bishop Brennan wrote on social media. “The suffering is incomprehensible. Lord, please comfort them all in the NYPD.”

How to Donate
Fund the First: Officer Jason Rivera