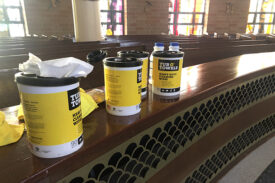 Four more confirmed coronavirus cases were announced by the Diocese of Brooklyn. The following communities were affected:

All of the locations mentioned above are undergoing deep cleaning and sanitization following guidelines issued by the Centers for Disease Control and Prevention.

Father Robert H.C. Mema, the administrator at St. Kevin’s, took to the parish’s Facebook page and told parishioners that he spoke to the choir member who tested positive.

“I have been in contact with our parishioner and she is doing well,” the statement said. “Please keep her and her family in prayer.”

To stop the spread of further cases, the diocese canceled all Masses March 16 and closed all churches and rectories until further notice beginning on March 20.

Six of the confirmed cases were from three gatherings of the parochial community group at St. Gabriel’s Church, and the other was a Eucharistic Minister in Corpus Christi.

New York Gov. Andrew Cuomo said Saturday, March 21, that there were about 6,211 confirmed cases of the COVID-19, an increase of 1,800 from the previous day. Fifty-four percent of them are from patients who are between 18 – 49 years old, younger than 60, the risk group initially identified by authorities.