At the newly-marked gravesite of famed Yankees batboy Eddie Bennett  are, from left, Anthony Spadolini, who donated and created the memorial; Father Michael Udoh, who blessed the grave; Anthony “Nickie” Nicodemo of the Catholic Cemetery Office; and Charles Papio. (Photo: Ed Wilkinson)

The gravesite of a former New York Yankees batboy that was unmarked for 85 years now has a stone memorializing his life. (Photo: Ed Wilkinson)

‘Today, Eddie Is a Winner Again’

MIDDLE VILLAGE — The gravesite of a former New York Yankees batboy that was unmarked for 85 years now has a stone memorializing his life.

A small group of admirers gathered at the St. John’s Cemetery, Middle Village, for a blessing of the granite marker to make sure the legacy of Brooklyn-born Eddie Bennett would not be forgotten. Father Michael Udoh, the chaplain at St. John’s, conducted a prayer service during which he sprinkled holy water on the new stone.

The story of Eddie Bennett and his unmarked burial place was reported in The Tablet last year. It told about how Bennett had suffered a boyhood disease that stunted his growth and caused a hunched back. But he hooked up with baseball and eventually got a job as a personal mascot and good luck charm with the Chicago White Sox.

After a brief stint at Ebbets Field with the Brooklyn Robins, he was hired in 1921 by the Yankees and quickly became more than just a batboy. He was friends with Babe Ruth and could be found playing catch before games with the Bambino to the delight of fans. He would kneel next to Ruth in the on-deck batter’s box. One piece of Yankees folklore is that Bennett would carry messages from the dugout from The Babe to a woman in the stands who would eventually become Mrs. Babe Ruth.

Bennett was also a favorite of Miller Huggins, who had him sit on the bench next to him, making him possibly the first bench coach in the major leagues. A photo on the internet shows Bennett, along with Ruth and the Yankees lineup known as Murderers Row, endorsing Al Smith for President in 1928. During his tenure with the team, the Yankees won seven American League championships and four World Series.

In 1932, Bennett was struck by a taxicab in Manhattan and had to leave his cherished position with the ball club. To ease the pain of his afflictions caused by the accident, he turned to alcohol and drugs, which led to his death in 1935 in his West Side apartment, surrounded by Yankees memorabilia.

An obit in The New York Times said, “[T]he walls (of his apartment) were covered with autographed pictures of ballplayers. Piled everywhere were gloves, bats, scorecards, clippings of stories of ball games. He had a drawer full of signed baseballs.”

Indigent and without family, Bennett was buried in a plot at St. John’s donated by his landlady Della McCabe, who lived near the site of the old Polo Grounds in upper Manhattan. A funeral Mass was celebrated at St. Gregory the Great Church in Morningside Heights.

While the Yankees paid for the funeral and burial, members of the front office attended the funeral. Still, no Yankees players were there, presumably because it occurred during the off-season. Ruth was abroad on a baseball goodwill tour.

And there he remained, virtually unknown. Enter Charles Papio, a retired Brooklyn cop who is a member of St. Bernadette’s parish, Dyker Heights. While visiting his family grave at St. John’s, he came across a brochure that listed “a famous Yankees batboy” among those buried at St. John’s. When he visited the grave, he was heartbroken to see there was no gravestone with a name on it.

He then brought the story to The Tablet. After the story appeared, Elaine Nicodemo, the executive director of Catholic Cemeteries and Msgr. Michael Reid, the CEO/spiritual moderator, agreed that something had to be done, and they turned to Anthony — better known as “Nickie” — Nicodemo, who has spent more than 50 years with the Catholic Cemeteries Office.

“I called Anthony Spadolini at Wellwood Memorials and told him the story,” said Nickie. “I said we could find a piece of old granite around here, and I asked if he would engrave it. But Anthony said he could do better than that. He said, ‘Why don’t I get a new marker,’ and he took it from there.”

Spadolini, the fourth-generation owner of Wellwood Memorials, North Lindenhurst, L.I., said, “When I heard the story, I knew we had to do it. I’m in the business of remembering. I believe everyone’s grave should be marked.”

He donated the marker and engraved the stone that sits at the site – Section 34, Row DD, No. 64 — along the Cooper Ave. side of the cemetery.

A lifetime Yankees fan, whose favorite player is Derek Jeter, Spadolini said that his father once had a tryout with the Cleveland Indians. He previously worked on the final resting places of Marvin Hamlisch in Queens and Jerry Seinfeld’s father, as well as the Korean War Memorial in Happauge, Long Island.

Father Udoh promised to celebrate Mass in the cemetery chapel for the repose of the soul of Bennett. He also thanked those whose efforts brought about the grave marker.

“You have made sure that Eddie, a man who brought joy to many people, will never be forgotten,” he said.

To read more historic newspaper articles about Eddie Bennett, click the images below: 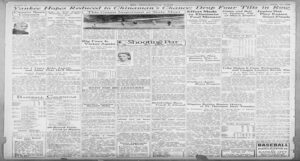 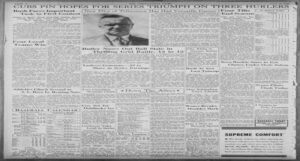 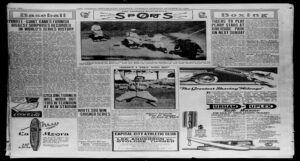 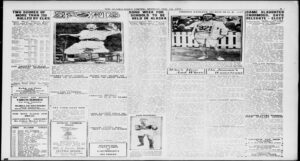 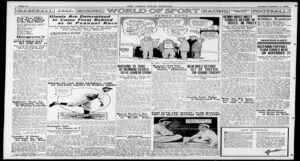