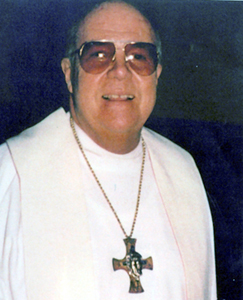 Father Francis M. Lynch, former pastor, parish priest and high school seminary teacher, died April 11 at the Hospice of West Palm Beach, Fla. He was living in Florida in retirement. He was 83.

A Mass of Christian Burial was celebrated April 16 at Our Lady of Mount Carmel Church, Astoria.

“Father Lynch was a very good priest. He loved his priesthood and the people he served,” Father Berran said. “He was always social. He rooted for the underdog, and he wasn’t afraid to go against the system and stand up for what was right.”

Father Berran became friends with Father Lynch while they were students at Cathedral College 63 years ago. When Father Berran was ordained, Father Lynch preached at his first Mass and again at his 25th anniversary Mass.

In their younger years, they traveled to Europe, Scandinavia and Puerto Rico together. Most recently, they kept in touch on current events, family news and diocesan happenings through regular telephone calls. They last spoke the day before Father Lynch died. Those telephone calls are what Father Berran says he will miss the most.

He served as an assistant at St. Charles Borromeo, Brooklyn Heights, 1957-63, and then was appointed to the faculty of Cathedral Prep Seminary, Elmhurst, where he taught until 1967.

He resided at St. Francis of Assisi rectory, Astoria, 2002-07, before moving to Florida.