There were enough sparkles and yards of bright-white tulle to dazzle any onlooker. I and nearly 80 other brides stood along a row of barricades, all decked in our wedding garb. My husband, Brian, and dozens of other husbands sweated in ties and suit jackets beneath the Italian sun. I could hardly keep still. The Holy Father was coming.

“For us, our first priority is to become a holy marriage,” said Mateo Moya, who married his wife Paula Benavent in Alzira, Spain, on April 22. “This is the best way to start our marriage, to come here and ask for the blessing of the pope.”

It was St. John Paul II who began the “Sposi Novelli” or “Newlyweds” blessing and now both Pope Emeritus Benedict XVI and Pope Francis have carried it on. During every Wednesday general audience, when the Holy Father greets and teaches the pilgrims gathered at the Vatican, brides and grooms married within the last two months who are wearing their wedding attire are given the chance to meet the Holy Father and speak with him face to face.

“It’s just a wonderful opportunity to meet the pope,” said Seth Horton of Toledo, Ohio, who joined the Catholic Church at Easter and married his wife Sarah one week later. “(Pope Francis) knows that the family is the core of our entire civilization and blessing the marital union is absolutely paramount to having a society that fears and wants to serve God.” 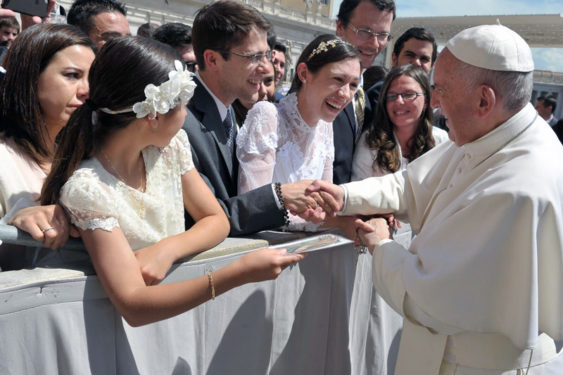 Spouses hailed from all corners of the globe. Most of them were in their 20s and 30s, but some represented other life stages. Angelika (56) and Tomas Kneisel (53) from Kleinosthin, Germany, have been civilly married for seven years but sought a sacramental marriage in March.

“It was not totally married, only half married so to say,” Tomas explained with a smile, and Angelika nodded in agreement.

“It was time,” she added. “Some things in life are difficult and if you think you can do it alone, it’s not right.”

This desire to be supported by Christ and by the community of the faithful was echoed again and again.

“When somebody blesses you, it’s like he wishes you all the best in your life,” said Emelea Szhdlowski, who had traveled from Poland with her husband Matthew just days after their ceremony. “He’s like Jesus, so for us it’s like a blessing from Jesus.”

The Holy Father finally appeared, greeted by outcries of joy in a multitude of languages. Stationed near the end of the barricade, we watched as he took his time with each couple, spending several long moments with each before moving on. I hardly recognized him. No photograph has ever captured the love and joy that radiates from his face.

The spouses next to us asked Pope Francis to sign a copy of one of his books on the same page where the publisher had printed his signature.

The Holy Father pointed at the copy of his autograph, “There’s one already there!” He laughed and added his own, authentic, signature to the page.

Then he turned to me. I felt the Vatican’s whole entourage of cameras point directly at me and a surge of the newlyweds crowd behind me attempting to reach the pope’s hand. Despite the chaos, his full attention was on me as if I were the only person in the world. My eyes were immediately locked into his kind gaze.

Determined to be a good journalist, I stammered a question in both English and his native Spanish. Silent, the Holy Father placed one hand on my cheek then, with his thumb, traced the cross on my forehead. Joy and peace filled my entire being.

Then he shook my husband’s hand and moved on. He continued down the line of newlyweds and left behind a wake of excitement and joy.

“It really gives us the fortitude that the whole Catholic Church is behind us in our decision making,” summarized Ivy Schmalzried of Boston, Mass., who stood alongside her husband Peter, her face glowing with joy as brightly as mine. “Together we’re combining our lives and we’re making it one in the sacrament of marriage.”

The multitude of newlyweds flocking to the Vatican each week are not the only group seeking support. Several days later, my husband and I visited with Brooklyn priest Father John Cush. He currently serves as the academic dean at Rome’s Pontifical North American College, where seminarians and priests from the United States and Canada further their education in the Eternal City.

Father Cush told us that the young men studying at the college needed support, too, and asked the people of Brooklyn and Queens to pray. “Pray that we’ll have these priests and young seminarians grow up to be happy, healthy, holy priests after the heart of Jesus the Good Shepherd,” he said. 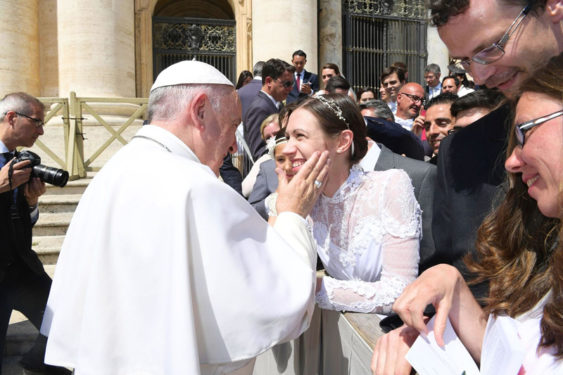 I echo that same request. On behalf of myself, my husband and all newlyweds, please, pray for us. Pray that we can share the same love that illuminated our Holy Father’s face, the love of Christ himself.

Katie Rutter, aka Breidenbach, is a former reporter for Currents, seen nightly on NET-TV.