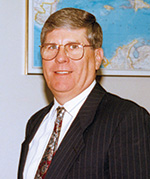 A graduate of Fordham University, New York University and Hofstra University, his professional career includes a total of 17 years as the principal of two Brooklyn Catholic high schools and seven years as the associate superintendent of schools for the Diocese of Brooklyn.

From 1963 to 1969, he taught English at Nazareth R.H.S., East Flatbush, before becoming the first lay principal at Bishop Loughlin M.H.S., Fort Greene, in September, 1975.

After Loughlin, he became the associate superintendent for schools in the Diocese of Brooklyn, working as chief educational operational officer. He also served as executive staff to the diocesan High School Principals’ Association and supervised both the diocesan special education and drug-abuse prevention programs.

In 1989, he returned to Nazareth as principal, for 11 years. He also served as a trustee at Xaverian H.S., Bay Ridge, 1987-93. After Nazareth, he chaired the education department of St. Francis College, Brooklyn Heights, 2003-09, and continued as a consultant until his death.

He is survived by his wife of over 50 years, Janet, four sons and seven grandchildren.