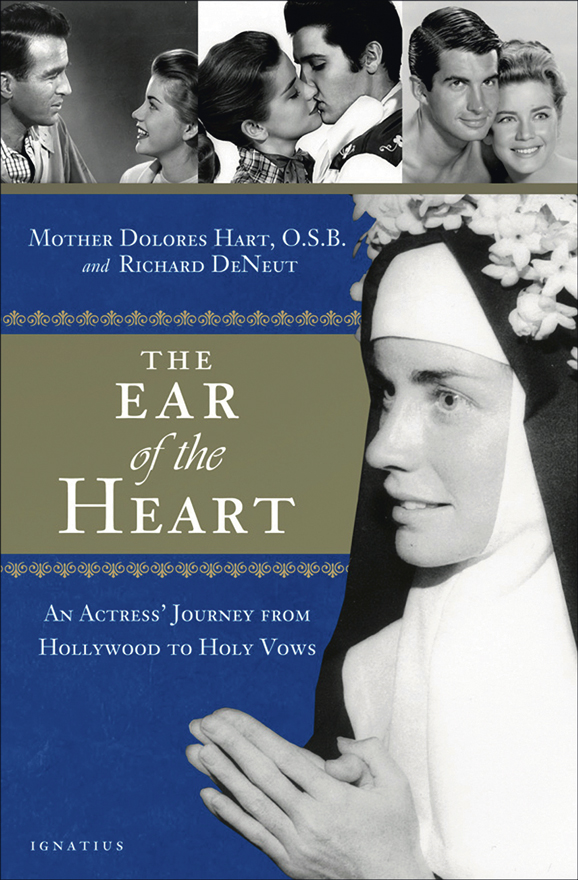 WASHINGTON (CNS) – Don’t look now, but Dolores Hart is about to become a star again, 50 years after her last movie.

Hart – that’s Mother Dolores, the prioress of a Benedictine women’s monastery in Bethlehem, Conn. – has just had her memoir published a year after a documentary featuring her life as a cloistered nun picked up an Oscar nomination for best documentary short subject.

She is crisscrossing the country this summer to promote the book, The Ear of the Heart: An Actress’ Journey From Hollywood to Holy Vows.

The latest rush of celebrity is “amazing,” Mother Dolores told Catholic News Service (CNS) in Washington, where she was scheduled for a raft of interviews and a personal appearance.

“It makes me realize that time is the illusion. We do things in our life, and we constantly do them. It’s only separated by time,” said the 74-year-old nun.

Mother Dolores, in her Hollywood days, made only 10 movies, but she made them count. She was cast twice opposite Elvis Presley, in 1957’s Loving You and 1958’s King Creole. She starred in the first film celebrating the annual ritual of spring break in 1960’s Where the Boys Are. She even did a star turn as St. Clare in the 1961 religious biopic Francis of Assisi.

But she’s most proud of playing the title character in the 1962 drama Lisa, as a Jewish girl who survived the Nazis’ Auschwitz death camp only to be pursued by traitors after World War II intending to force her into prostitution.

“(Actor) Stephen Boyd was the man who rescued Lisa and told her he would take her back to Palestine. And of course she had a very hard time hearing him and to believe in him and actually get there. And that relationship with Lisa was for me a relationship with the Jewish women who had undergone that experience,” Mother Dolores said.

After hearing firsthand the death camp experience from one Auschwitz survivor, “I wanted to do that picture. I wanted somehow to be identified with the best possible rescue of these people,” she added. “And I loved working with Stephen. I fell in love with Stephen in the middle of it. I was hoping he’d ask me to marry him.”

“Maybe someday,” Mother Dolores mused, “we’ll work it out. We’ll meet and say, ‘What a good thing we did.’”

Life Had a Bigger Meaning

Born in Chicago, she said her grandfather had a motion picture operator’s license. She’d go into the booth with him and spend days as a youngster watching movies. She told CNS she had always wanted to be an actress, but after her successes on screen, she began to think life “had a bigger meaning,” that “every human being has a mission,” and maybe making movies was not the “end-all and be-all.”

When she knew Elvis, she said, “he wanted to do something with his career. He wanted to get rich and interesting parts. They never gave him that. They just kept putting him in one girlie film after the other.”

Mother Dolores was never nominated for her film roles, but she was the focus of the Oscar-nominated HBO documentary God Is the Bigger Elvis.

She said Archbishop Pietro Sambi, the late papal nuncio to the U.S., summoned her to his office one day and told her, “You are to make a movie about consecrated life.” Mother Dolores protested, saying all her Hollywood contacts were dead. “And he said, ‘No, no, no, no. God will help you do this, because this has to be done,’” she recalled. Four days later, HBO representatives – none of whom had ever heard of Archbishop Sambi – called to ask permission to film at her convent, Regina Laudis Monastery, for a documentary.

The film was originally set to be two hours long, but an HBO executive, smelling an Oscar, decided to chop the documentary in half. “And that’s when my heart began to sink and I began to think, ‘Oh, no, it’s going to be about me,’ because what (else) are they going to do to cut a two-hour film down to one hour?” she told CNS.

God Is the Bigger Elvis was nominated, although it did not win. “I thought to myself, I hope this film will be of value. That’s all I hope,” Mother Dolores said.

One might think The Ear of the Heart was written to capitalize on the documentary’s high profile. Not so.

“Dick DeNeut, who wrote the book with me, asked me 10 years ago if I should do a story of my life,” Mother Dolores said. She added she resisted the idea initially, but she eventually consented.

She said that originally, she wasn’t thrilled with the title, either: “I thought it would be a medical journal. But he (DeNeut) said, ‘That’s the first line in the Rule of St. Benedict: Listen, my son with the ear of the heart to the voice of the master.’”

Mother Dolores is the only nun to be accredited as a voting member of the Academy of Motion Picture Arts and Sciences – colloquially, the folks who choose the Oscar winners. And it comes in handy for the occasional movie night at the monastery.

Sisters “will put up (notes) on the board saying, ‘Can we see this?’ ‘Can we see that?’ ‘Could anybody bring this?’ We’re in the monastery, but they know,” Mother Dolores said, laughing. “We do have our special movie nights. I think the last was ‘Les Miserables.’ Everybody wanted to see that.”

Editor’s Note: A CNS video interview with Mother Dolores Hart can be found at youtube.com/watch?v=sIyn0_2GnCE.