As the bells of St. Andrew Avellino Church in Flushing signaled noon, two busloads of parishioners embarked on a journey to Brooklyn, the “Borough of Churches,” to visit three historic structures.

The first stop was the Co-Cathedral of St. Joseph, Prospect Heights, where the rector, Msgr. Kieran Harrington welcomed his longtime friend Father Joseph Holcomb, pastor of St. Andrew Avellino, and his pilgrims. The group sat in reverence as Msgr. Harrington recounted amazing stories of the founding of the 165-year-old parish. He presented a “guided tour” around the recently restored edifice. He described the statues, paintings and windows, which tell the history of the Catholic Church, with representations of the Stations of the Cross, the sacraments and depictions of saints and miracles.

Marianne Giacalone later observed, “The Co-Cathedral beautifully inspires devotion to the Blessed Mother with its various paintings of Mary associated with many different countries.”

In 2013, Pope Benedict XVI designated the church as a co-cathedral, which means it shares the function of being the Bishop’s seat with the Cathedral-Basilica of St. James. 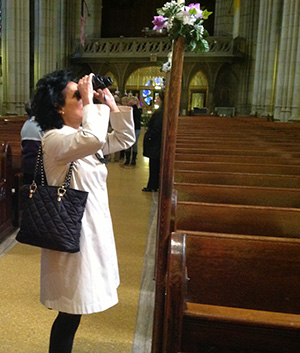 Next stop was Queen of All Saints, Fort Greene, and a very warm greeting at the door by Kathleen and Cornelius Walsh, veteran parishioners who volunteer as welcomers. Walking into the church, with its towering stone columns holding ribbed concrete vaults, was like entering a Gothic forest. The Baptismal font

stands at the entrance to the nave and the progression from font to altar symbolizes the passage through life.

Fourteen giant windows illustrate 260 themes from the Old and New Testament, starting with the creation and ending with the life of Christ and the Apostles. The Gothic concept was envisioned to provide instruction for people who did not know how to read. Life-sized angels, intricate tapestries, Norman oak pews and bronze light fixtures all combine for a truly spiritual experience.

The parish traces its beginnings back to a small Chapel of St. John in 1878. The pastor, Father Joseph Ceriello, answered questions.

Mary Mulligan said, “I have seen these magnificent churches many times on NET-TV. They are so much more impressive in person.”

In 1979, Pope John Paul II stopped and walked among the faithful assembled in front of the church. The rector, Father Peter Purpura, took time out from a school reunion that was going on in the church basement to visit with St. Andrew’s group. He spoke about the origin and history of the parish, and its continuing outreach to the changing community. He then celebrated Mass with Msgr. Michael Brennan and Father Holcomb, with Deacon Rafael J. Perez assisting at the altar.