Over 200 students, educators, dignitaries from the military, the N.Y.P.D. Police Band, and alumni from the area attended the event.
Popular tenor and former N.Y.P.D. policeman Daniel Rodriguez opened and closed the ceremony with the Star Spangled Banner and Amazing Grace.

“This ceremony lets the kids participate by coming forward with their flags, singing the patriotic songs, and writing essays about patriotism,” said Mario Massa, a Knight of Columbus and head organizer.

Persephone Simon, a Gold Star mother from the Bronx, was presented with a flag that had previously flown over the Immaculate Conception courtyard. She lost her son, Private First Class Chassan S. Henry, in the Iraq War in February, 2005. “It’s a great honor to see the people here honor him and his sacrifice for his country,” she said.

“What this flag represents is freedom in our country,” said Joe Marino, Grand Knight, Immaculate Conception Council No. 11449. “If we didn’t have this kind of freedom, we would not be able to practice our religion and participate in the world the way we do. It’s a very exciting day for everyone here, especially to see the veterans who are here.”

One of those veterans was Luke Gasparre, a World War II veteran from the 87th Acorn Division who fought in the Battle of the Bulge.
“I was thinking of all the veterans that passed away,” he said. “So I am here to celebrate Flag Day as both an American citizen and a veteran. When I see the flag flying up above, it means freedom for all of us, for this country. I am proud that I fought for that flag.”

“We see flags everywhere on a daily basis, and although we may pledge allegiance or sing the national anthem, I think we take for granted what the flag actually stands for,” said Immaculate Conception alumna Nicole Aloise, assistant district attorney for Queens County. “I am grateful to live in a country that is full of freedom.”

“The flag represents the country, and as such, represents a living thing. But you’re not dying for the flag, you’re standing up for the ideals that this country represents,” added Colonel Peter Sammarco, former Senior Liaison Officer for the Multinational Force in Iraq.

“Anytime I see the flag, it always grounds me that I am an American,” said April Sepanski, an attendee. “I want to remember that, and I love to honor the soldiers and I’ll never forget what they’ve done. I think this needs to be reinforced, especially in our schools.”

“The United States has been blessed in a way that no other nation, peoples or empire or anything in history has ever been blessed,” said Msgr. Charles Boccio, pastor emeritus, Immaculate Conception. “These are blessings that God has given us, and they are indeed great blessings. That is why we should always say with great meaning and great fervor: Thank God, and God Bless America.”

“This flag represents, and shows you that, you can be anybody you want to be,” said City Councilman Peter Vallone, Jr. “Just do it well and do it with God in your heart and a smile on your face.” 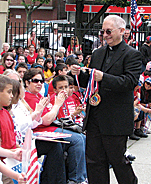 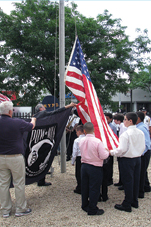 2 thoughts on “Flag-Waving at Immaculate Conception, Astoria (with slide show)”