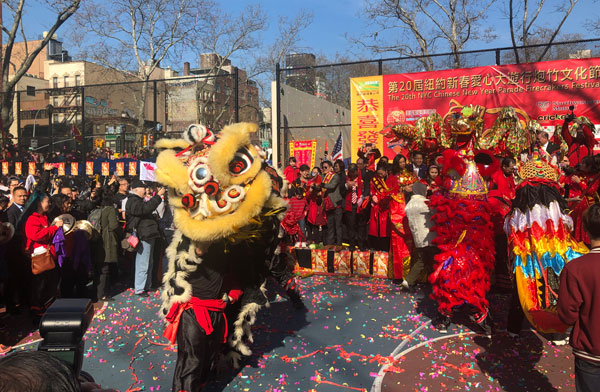 Thousands gathered in Manhattan’s Chinatown to spread good spirits and start the new year with a bang.

Firecrackers – hundreds of thousands of them – were part of the celebration of Chinese New Year Feb. 5, marking the start of the Year of the Pig. The pig is seen as a symbol of good fortune and wealth.

“Everyone celebrating! Everybody eats! Everybody happy!” said Ruby Qnng, one of the performers.

It was a day for celebration and prayer as Chinese Catholics gathered for Mass at Chinatown’s Transfiguration Church. Praying in Mandarin, they asked God for blessings in the year ahead.

“Pray to God to give us a good beginning so, for the rest of the year, we will live the Gospel!” said Yee Ling Poon, who participated in the day’s festivities.

In the Brooklyn Diocese, Chinese Catholics make up at least 10 percent of those welcomed into the faith each year as part of the Rite of Christian Initiation process. At last year’s Easter Vigil, around 350 Chinese-Americans received the sacraments in Brooklyn and Queens. The greatest numbers came from St. Michael’s parish, Flushing; St. John Vianney, Flushing; St. Agatha, Sunset Park, and Our Lady of Perpetual Help, Sunset Park.

The growth of Catholics in the diocese matches an overall increase in New York’s Chinese-American population.

Part of the new year festivities this week included the tradition of red envelopes. “You put money in there… a little bit of money. Sometimes you put candy in there. It’s basically good luck,” said Yee.

But more important than cash, the revelers were interested in prayers.

“I’m praying for peace in the world and that’s what we need,” Yee added.

Keeping those intentions close to their hearts, they sang, danced and enjoyed firecrackers. Parish celebrations of this holiday continue in the Brooklyn Diocese throughout the weekend. On Sunday, Feb. 10, St. John Vianney parish in Flushing will host a celebration, starting with 12:45 p.m. Mass.