On the eve of Mother’s Day, hundreds of Catholics came together in Bayside to honor their mother – the Blessed Mother under the title of Our Lady of Antipolo.

Retired Auxiliary Bishop Guy Sansaricq was the main celebrant of the diocesan Mass and festivities for this Filipino feast, held at St. Robert Bellarmine Church May 5.

“This is a timely celebration because she’s our mother and tomorrow is Mother’s Day,” said Ceres Foronda of the Filipino-American community at the parish. “This is all for our Mother. Every year, this is our gift for her, to gather her people.”

During early May, Filipinos across the world pay homage to the Virgin of Antipolo, who is also known as Our Lady of Peace and Good Voyage, because she is attributed with protecting travelers and working miracles in times of conflict.

The Bayside celebration opened with a living rosary and brief outdoor procession. The Voice of Friendship Choir sang hymns in Tagalog and English during Mass, which was followed by an evening of fellowship, Filipino fare and line dancing.

In preparation for the feast, the parish held a nine-week novena that concluded on the first Saturday of May.

“The Filipino community invited everyone to come and pray, whether you were Filipino or not,” said Lisa Sampson, the parish’s faith formation director. “They really put their heart and soul into it.”

Last Saturday, the congregation was largely comprised of Filipino families from more than a dozen parishes, but devotees of other ethnic backgrounds were also present in the pews. 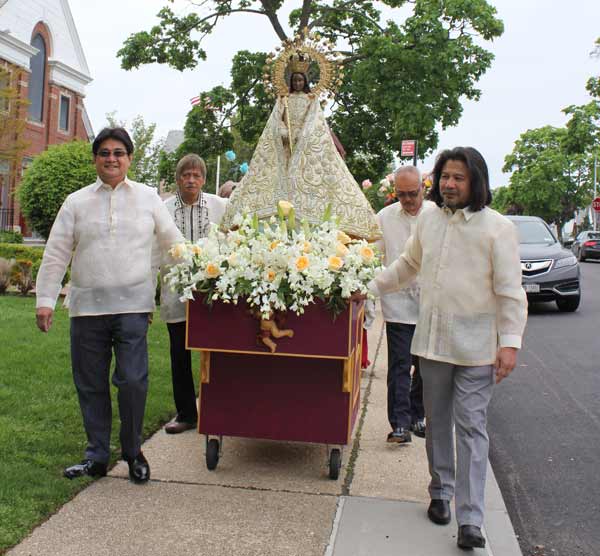 Every eye was fixed upon the figure of Mary, carved of dark wood and adorned in a golden gown, as she advanced up the main aisle to a place of honor on the altar.

And all were united by their love for Mary, whom the bishop called “the Mother of every nation, every ethnic group, every language, the universal Mother.”

Devotion to the Blessed Mother under the title Our Lady of Antipolo dates back nearly four centuries when the Philippine islands were under Spanish rule, and trading ships were going back and forth from Mexico.

On a trip from Mexico to Manila in 1626, Governor Juan Nino de Tabora brought along a dark wooden image of the Blessed Mother. On that voyage – and every one thereafter – anyone travelling with that statue was preserved from harm.

After the governor died, the statue was given to Jesuit priests who were building a church in Antipolo. When priests tried to move the statue, the icon kept returning to the trunk of a tipulo tree at the site of the old church. She was enshrined there and became known as the Virgin of Antipolo.

The statue was moved through the years, but wherever she went, she was credited with saving people from fire, perilous seas and even drowning.

Twenty years ago, a replica of the statue was enshrined at St. Robert Bellarmine Church, under the pastorate of the late Msgr. John Lavin.

The Marian shrine is now a pilgrimage site for devotees from the diocese and beyond.

“Beautiful people of the Philippines,” the bishop said in his homily, “ones who left your land to come to the United States and to so many countries in the world, remember that God loves you as He loved Mary.”

Pointing to Mary as a role model, he reminded the faithful that the Virgin gave herself entirely to the Lord. Baptized Catholics, the bishop said, are also entrusted with the mission of carrying the Gospel in word and deed to others.

He exhorted Filipinos in the diaspora to never forget loved ones back home.

“If you’re successful here, remember there are places in the Philippines that have no schools and no hospitals. Participate in the uplifting of your nation,” he said.

Furthermore, he urged the crowd to be truly Catholic, to embrace people of every nation and language.

“It is the love of Christ that is going to save the world,” he said.

“Peace is really needed at this time and we need Our Lady of Peace, all over the world,” she said. “So I wish people would pray (to her) because she is for everybody.”

Josie Nover, a native of the Philippines who now lives in Our Lady of Miracles parish, Canarsie, has attended the annual feast in Bayside for more than a decade.

“It is a tradition that we grew up with and naturally, it is very dear and very close to our hearts,” said Nover, senior advisor of the diocesan Filipino ministry in Brooklyn.

As a child, she recalls singing the “Salve Regina” at every Mass and on Sundays, families would devote the day to visiting the Virgin of Antipolo.

“Our parents would say, ‘Let’s go to Antipolo. Let’s go to the shrine,’ as if Mass was not enough,” she recalled.