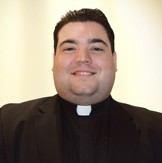 Father Ralph Edel, 25, is looking forward to being a joyful priest, who radiates the fact that his encounter with Jesus Christ has transformed him.

“My goal is to encounter people from different walks of life and to show them that encounter of Jesus most specially in the Mass and through the sacraments but through everything I do,” he said.

The oldest son of Angela and Peter Edel, he grew up in Good Shepherd parish, Marine Park, where he was very involved in ministry. His parents sacrificed much so that he and his siblings could have a Catholic education.

When he was applying to high school, he realized God had a plan for his life.

“My mom noticed that I was nervous … She said ‘It is in God’s hands and He knows what He wants you to do,’” he recalled. “It was the first time that it occurred to me that my life was not my own. God was the one who was in control of my life and I was just along for the ride.”

His chance to respond to God’s call came later through priests at Cathedral Prep. During a visit to the Cathedral Seminary House of Formation in Douglaston, it clicked that “you can be a normal guy and be a priest,” and that there are different ways to live out the priesthood.

“Each of those ways share the same goal and that is bringing the people of God closer to Jesus Christ,” he added.

In 2014, Father Edel went to the House of Formation to discern his call to the priesthood. At first, the experience was frightening and confusing and he tried to leave but the other men discerning encouraged him to persevere.

He went on to continue his formation in Douglaston before going to St. Joseph Seminary in Yonkers.

He holds a bachelor’s in philosophy from St. John’s University, Jamaica; a master’s in theology from St. Joseph Seminary and a master of divinity degree and the degree of bachelor of sacred theology from the Pontifical University of St. Thomas Aquinas in Rome.

His pastoral preparation included three summer assignments where he learned from three fatherly pastors at Our Lady of Mount Carmel, Astoria; Immaculate Heart of Mary, Windsor Terrace; and St. Gregory the Great in Bellerose.

Each of these assignments made him deepen his understanding of the priesthood. At Our Lady of Mount Carmel, he had a taste of the diversity of the Diocese of Brooklyn and practiced preaching at the daily Mass; at Immaculate Heart of Mary, he learned the importance of youth ministry; and at St. Gregory the Great, he learned to work with children in the parochial school.

Father Edel spent his diaconate year at St. Helen parish, Howard Beach. During the weekends, he performed baptisms and was able to preach at Sunday Mass.

He said he’s been privileged to find friends and role models in the fraternity of priests in Brooklyn and Queens. Their support, along with the support of his family, has sustained him during his formation. Two role models that jump to mind were his former pastor, the late Msgr. Thomas Brady, and Auxiliary Bishop James Massa, whom he has known since fifth grade.

Father Edel also looks forward to helping others encounter God’s mercy through the sacrament of confession and to “get to the work of the priesthood” he has heard about for the last eight years.

His family, including his siblings Victoria and Nicholas, as well as his grandmother, Vivian, will attend his ordination. Fathers Felix Herrera and William Cleary will vest him.

Father Edel will offer his First Mass of thanksgiving at Good Shepherd Church on Sunday, June 5 at 12:30 p.m. Bishop Massa will preach at that Mass.