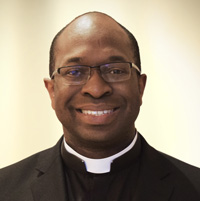 For Brooklyn-born Father Mark Bristol, 31, the call to priesthood flowed and ebbed while serving in the U.S. Navy. Ultimately, he discerned that God was calling him to be a fisher of men.

The youngest of four children born to immigrants from Guyana, South America, he was raised in the Church of the Nazarene, an evangelical Christian church. He attended Concord Baptist Elementary School in Bedford-Stuyvesant, before his family moved to Florida, where he attended Atlantic Community H.S., Delray Beach.

He earned his bachelor’s degree in philosophy at Franciscan University of Steubenville, Ohio, before entering the Seminary of the Immaculate Conception, Huntington, L.I., and St. Joseph Seminary, Dunwoodie.

He holds master’s degrees in divinity and theology from St. Joseph’s Seminary, and a bachelor of sacred theology from the Pontifical University of St. Thomas Aquinas, Rome.

A high school literature class first piqued his interest in Catholicism. He was assigned to read Paul Zimmer’s poem, “The Day Zimmer Lost Religion,” but couldn’t understand the meaning because he didn’t know what the Mass was.

Turning to the Internet for answers, he Googled the term “Mass,” and then went to a chat room, where he met a Catholic gentleman. Not only did the man answer his questions, but also explained that he went to Mass almost every day because he needed Christ in his life.

“At that moment, I saw I had that same desire,” Father Bristol said, “I wanted Christ to be more in my life and I saw how I was filling it with other things that weren’t bringing me satisfaction.”

He started attending St. Thomas More Catholic Church, Boynton Beach, Fla., and joined the Life Teen youth ministry. He discovered the RCIA program and at age 16, entered the Catholic Church. At first, his parents were hesitant, but eventually gave their blessings.

“Immediately after I came into the faith, I started thinking about the priesthood,” he said.

He considered a religious order, but was refused because he was too young. He enlisted in the U.S. Navy., and worked in the fields of information technology and communications in Norfolk, Va.; Gaeta, Italy; Pittsburgh, Pa.; and Djibouti, Africa.

Father Bristol wavered about his vocation until April of 2005, when his ship, the USS Mount Whitney, was stationed in Italy, and he had the chance to attend Pope St. John Paul II’s funeral.

“Being present at his funeral really spoke to me, and I felt that God was saying, ‘Mark, what happened to that fire and fervor you had when you first came into the Church?’”

That summer, he went to World Youth Day in Cologne, Germany, and shortly thereafter, “God confirmed he was still calling me in the confessional,” he said.

His confessor, then-military chaplain Msgr. Robert M. Sable, asked if he’d ever thought about the priesthood. “I told him, “Father, didn’t you just hear my confession? I’m not called to be a priest. I’m not worthy.” And he said, ‘I think God is calling you.’”

During summer vacations, he returned to Bedford-Stuyvesant and attended Mass at St. John the Baptist. He realized that he “felt at home in Brooklyn. I felt God was calling me to minister here.”

That sense grew stronger after meeting Bishop Nicholas DiMarzio at a Project Andrew.

Father Bristol was commissioned an officer in the Navy’s chaplain program, and currently holds the rank of lieutenant.

In 2009, the Naval Reserve named him “Sailor of the Year,” and he is the former president of the National Black Catholic Seminarian Association.

His preparation for the priesthood included summers at Our Lady of the Miraculous Medal, Ridgewood, and a diaconate year at Blessed Virgin Mary Help of Christians, Woodside. He is fluent in Italian.

Among his priestly role models are Servants of God Father Vincent Capodanno and Msgr. Bernard Quinn, both U.S. military chaplains. He met the Capodanno family while serving in Italy, and calls the priest his intercessor. He will use Father Capodanno’s chalice at his First Mass.

His parents, Martin and Pauline, who now reside in Atlanta, Ga., will attend his ordination with his brothers, Matthew and Simon-Walter; sister, Persis; and his nieces.

He will be vested by Msgr. Sable, and Father Daniel O. Kingsley.

Father Bristol will offer his First Mass of thanksgiving at Immaculate Conception Monastery Church, Jamaica, on Sunday, June 5, at 3 p.m.