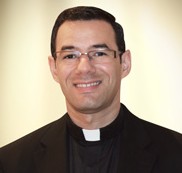 Father Ambiorix Osorio, 32, is ready to selflessly serve the people of God like one of his role models St. Louis De Montfort. He had also seen this “spirit of selflessness and commitment to God’s people” in Brooklyn priests who encouraged his vocation.

The son of Leopoldo Osorio and Maria Villodas, Father Osorio was born in Santiago Rodriguez in the Dominican Republic. Father Osorio and his three siblings grew up in the country area, where Mass was celebrated only once a month in the area’s only chapel.

After elementary school in his town, he came with his sister to New York in 1998 and settled in St. Rita’s parish in East New York.

Father Osorio graduated from high school then went on to study at the Technology Learning Institute in Harrison. Meanwhile, he had been discerning the call to the priesthood since he was 15 years old. He rejected the whole idea at first, but faithful lay people who knew him encouraged him to continue thinking about it.

“I wanted to have a career and have my own family but then the thought of the priesthood kept coming back,” he said.

“At one point I realized that there was something that God was asking me to discern. Then the door to my heart was opened to the reality that God was calling me to be an ordained priest.”

Feeling like a burden had been lifted off his back, he began to pray for his vocation and applied to the seminary. He earned a bachelor’s in philosophy from St. John’s University, Jamaica. After his studies at St. Joseph Seminary, Yonkers, he’s earned a bachelor of sacred theology and a master of divinity.

During his formation, he also served summer assignments at St. Mary Mother of Jesus, Bensonhurst. The experience encouraged him. He was also motivated by the enthusiasm of the children at the parish school.

His second assignment was at Incarnation Church in Queens Village. There he saw the example of Father John O’Connor, who “gives his life to the service of the parish and the people,” and the mutual love between pastor and parishioners. At the diverse parish, he was inspired to see people from different ethnic backgrounds united in working to support the church.

As a deacon, Father Osorio served at St. Andrew Avellino in Flushing with the pastor, Father Joseph Holcomb. He had more sacramental responsibilities, especially baptism and preaching on weekends.

“To see the joy of the people there when you serve them is a gift from God,” he said. “It’s a beautiful thing.”

This joy, he added, spoke to his vocation “to follow Jesus’ steps and be with the people.” That happiness can sustain priests through challenges.

In addition to diocesan priests, he looks to St. John Vianney as a role model. He was an inspiration when trying to discern the priestly call since Father Osorio worried about the idea of studying another language like Latin as did the saint. He ended up relying on the grace of the Holy Spirit.

“St. John Vianney experienced challenges but God was with him,” he said. “I thought if God is calling me to the priesthood, He was going to guide me to go through the seminary formation and finally be ordained.”

Now, he looks forward to leading a Christ-centered life in the service of the Church.