Telephones began ringing and e-mails started flying after an article appeared in the July 26 issue of The Tablet, recounting the World War II experiences of John A. La Barbera of Corona. The story, based on 45 letters he wrote from the South Pacific to a friend back home, told of La Barbera’s devotion to his Catholic faith as well as the New York Yankees.

Those phone calls and e-mails were sent by family members, who began alerting one another to the feature. La Barbera’s son, also named John, was informed of the article by his nephew. “It was a good thing I was in my cubicle in the corner” at work, John admitted, because “it was difficult to keep my eyes dry.” His father didn’t talk much about the war, he said, so The Tablet story provided information his descendants had never known.

La Barbera’s sister, Mary Ann Buckley, said that she was “touched and emotional” over the account of her brother, who signed his letters “Jackie.” As a 10-year-old, she had written to him overseas. While his Army records and even the envelopes he addressed gave his name as John, Mary Ann revealed that he was actually christened Giacomo, which Italian-Americans routinely shortened to the similarly sounding “Jackie.” Actually, she noted, the name means “James” in Italian, not “John.”

Contacted by The Tablet, various members of the clan filled in information about the airman’s life after he returned from the war. He and his girlfriend, Gail, got married and moved to Flushing, where they joined St. Kevin’s parish. They had three sons: Charles, Richard and John. Jackie served as a policeman for 22 years and then worked in a bank’s security department.

The trio of sons produced eight grandchildren. Two were named after Jackie: a grandson, John, and a granddaughter, Jacqueline, born just after her grandfather’s death in 1996. Gail survives him.

As for Jackie’s faith after the war, it continued to be just as devout. “He was a man of faith until the day he died,” his son Richard noted. “He loved God, the Church and, most of all, his family.”

Dedicated to Church and Family

Michelle La Barbera, Jackie’s granddaughter, echoed that appraisal, saying, “He truly was an angel on earth, and we miss him dearly every day. He was so dedicated to the Church and his family.”

Family phones might start ringing again when they learn the details of what Jackie wrote in letters about his on-again-off-again relationship with Gail while he was away during the war. For example, in a letter dated Oct. 5, 1942, Jackie confided to his friend, Bob Ebersold, that “so far I have been doing pretty good with Gail. So I gather from some of her letters, but others seem to put me in doubt.”

The following July, writing from Guadalcanal, Jackie said, “We were doing wonderful until I got a letter (from Gail) that tore me apart,” he said. “I guess that writes finish to Chapter One of the Loves of Jackie La Barbera….I’ll get over it within the next hundred and fifty years.”

But their love was not to be defeated. Writing from the Solomon Islands on Leap Year Day in 1944, he enthused to Bob that he had received a letter from Gail and, “from the sound of (it) everything is going along swell and no kidding. … Just because I float around this place with a smile people think that I’m too happy.” He assured Bob that “everything will turn out for the best.”

Jackie then asked Bob for a picture of him with his girlfriend, Patti. “I have a swell album,” Jackie wrote, “with lots of pictures.” He added that it already included eight or nine images of Gail “with more on their way.”

Their relationship, which had been shaky, indeed “turned out for the best.” Jackie and Gail were married for nearly 50 years.

James Breig, a veteran Catholic journalist, is the author of “Searching for Sgt. Bailey: Saluting an Ordinary Soldier of World War II.” The book is based on letters he found that were sent by a soldier in New Guinea to his mother. In his research, he also came across John A. La Barbera’s mail. Breig’s book can be purchased at www.amazon.com. 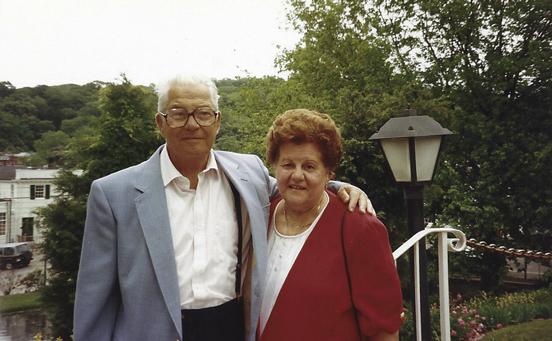