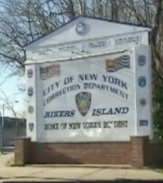 The New York City Council on Oct. 17 passed a plan to close the detention centers on Rikers Island by 2026 and move inmates to four smaller jails in New York City — a project that has the backing of local faith leaders, including Bishop Nicholas DiMarzio and Cardinal Timothy Dolan, the archbishop of New York.

Many are opposed to the move, however, including Police Commissioner James O’Neill, who said the city won’t be as safe because there won’t be enough prison cells. The detention centers on Rikers Island have about 7,300 inmates. The four replacement jails will have about 3,300 beds, according to reports.

Mayor Bill de Blasio’s office projects there will be fewer inmates because of lower crime rates and because of other programs to treat and rehabilitate criminals. Elias Husamudeen, who’s president of the corrections officers’ union, has weighed in against closing Rikers.

“When you’re not listening to your police chief who said, ‘Listen, you might be having a problem here because you’re building jails that only hold 3,300. What are you going to do if we have more than 3,300 inmates?’”  Husamudeen said in a radio interview on Oct. 20, according to the New York Post.

De Blasio originally proposed the plan, which will cost $8.7 billion, in 2017. The jails will be located at sites of current or past detention centers, including the Brooklyn Detention Complex in Boerum Hill and the now-closed Queens Detention Center in Kew Gardens. The two others will be in the Bronx and Manhattan.

During a press conference in September in lower Manhattan, weeks before the City Council’s vote, Bishop DiMarzio and Cardinal Dolan joined other local faith leaders to support the move on the grounds that conditions at Rikers are inhumane.

“We need to do something, and unless we do, it’s going to stay the way it is,” Bishop DiMarzio said.