As Lent drew to a close, I decided that I wanted to write a column about the resurrection of the Lord and our participation in Christ’s resurrection.
The mystery of Christ’s resurrection had been on my mind either explicitly or implicitly every time I thought about the meaning of Lent. While reflecting on what I wanted to say in the column, I realized that I had lived through a kind of a revolution or at least through a dramatic change in emphasis in Catholic theology and spirituality.
When I was in Catholic grade school, Catholic high school and even in the major seminary, the mystery of Christ’s resurrection was not emphasized. Years after being ordained, I looked through some of the manuals that we had used in our study of theology. The mystery of Christ’s resurrection was given little space and not treated as central to the meaning of Jesus and the meaning of our Christian lives. Now the mystery of Christ’s resurrection is at the center of all Catholic theology and spirituality.
What I wanted to do in this column was to point out that while on earth we share in Christ’s risen life, we will not share in the fullness of that life until heaven. This means that while on earth, we will suffer. Each of us will have to pass through death. Also, if we are sharing in Christ’s life, then we have to be concerned about those for whom Jesus died and who are being treated unjustly. Indeed, some of our suffering may be directly related to our faith in the Risen Christ and how that faith influences our presence in the world, our interests and our sense of mission.
While thinking about what I would write in this column I came upon an excellent essay by Father Richard Viladesau in his book, The Word In and Out of Season: Homilies for the Sundays of Advent and Lent (New York: Paulist Press, 1996, $9.95, 133 pages). 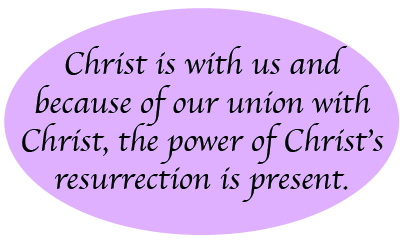 Father Viladesau was writing about the experience of Jesus’ transfiguration that was witnessed by Peter, James and John. Biblical scholars look upon the transfiguration as a kind of foreshadowing of Jesus’ resurrection. Father Viladesau points out that the crucifixion was what might be called another transfiguration, Jesus on the cross suffering the most awful kind of death. If we are going to identify with the Risen Christ, then the cross will have to be included in that identification. Father Viladesau, commenting on the transfiguration text that the Church presents to us on the first Sunday of Lent, writes the following:
“In proposing this text to us at the beginning of Lent, the church offers us a vision of hope, reminding us, as Paul says that the Lord ‘will give a new form to this lowly body of ours, and remake it according to the pattern of his glorious body.’ But we later disciples must be awake to the full implications of the vision of Christ’s glory and our own. We who are invited to the Mount of Transfiguration are also invited to the Mount of Olives, and on both we are invited to share the whole communion of Jesus with his Father. We must be awake, then, to both the glory and the misery around us: to the wonderful possibilities of human life, and its tragedies. And we must see the relation between the two. Anticipating Christ’s glory, we embrace the journey by which it is achieved: the sharing in the passion of Christ and the passion of the world.” (p. 90)
Called to Serve Others
Our sharing on earth in the risen life of Christ calls us to serve others. There are many aspects of the new evangelization that I find both inspiring and encouraging. I think it can remind us that though God’s love for us is a free gift, we are expected to respond to that love. That response should go in two directions: toward God and toward God’s children.
I also think the new evangelization can remind all of us that because we share in Christ’s life, we are never alone. This means that the power of Christ’s resurrection can have its effect on both us and those who come to know us. When we share in Christ’s risen life, even here on earth, we are empowered. When we try to live in such a way that others are challenged to consider the meaning of following Christ, it is not as though we alone are trying to influence people. Christ is with us and because of our union with Christ, the power of Christ’s resurrection is present.
Lent is a special season, which points toward Easter. I have come to believe that everything in Catholicism, indeed everything in our lives, points toward Easter and toward Christ’s risen life.
Father Robert Lauder, a priest of the Diocese of Brooklyn and philosophy professor at St. John’s University, Jamaica, writes a weekly column for the Catholic Press.
Previous Arts and Culture Story
Next Arts and Culture Story