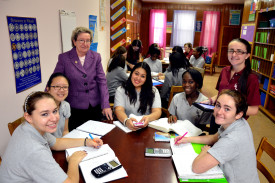 Recent renovations on the grounds of The Mary Louis Academy, Jamaica Estates, have transformed the former convent into a hub of student life, learning and activity.

Sitting at the top of one of the highest hills in Queens, The Mary Louis Academy (TMLA) boasts a bucolic five-acre campus housing eight separate buildings.

The most recent expansion to the campus took place last September when the original convent was com- pletely renovated for use by students, faculty, staff and visitors to the school.

The once-glorious mansion, formerly owned by a prominent Queens family, was in a dilapidated state when the first nine Sisters of St. Joseph took up residence in the spring of 1936.

The Sisters would later recall that the electric stove was in such poor condition that they would have to set several pots of water on the stovetop before leaving for Mass at Immaculate Conception Church across the street and hope that the water would have come to a boil for cooking by the time they returned.

Over the next seven decades the convent was home to more than 200 nuns, most of whom taught at TMLA. Others taught locally at St. John’s University and the Immaculate Conception School as well as engaged in other ministries. 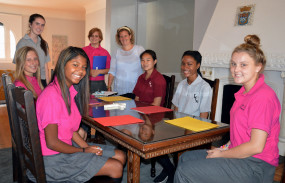 In 2011, the convent was closed due to its poor condition and the fact that just four Sisters of St. Joseph were in residence there.

Over the next three years several plans were discussed for the convent, including razing the building and replacing it with a new one. It was ultimately decided to renovate the expansive main floor of the existing building. The Sisters’ former commu- nity room was redesigned to house several classrooms and a bathroom.

The main central parlor of the convent once served as the academy’s first classroom for the 17 girls who were the first students in September, 1936. It is also where the girls would bring their escorts to meet the Sisters before setting out for the annual prom and where students would host the annual Christmas party for the elderly sisters living in the convent.

The “parlor” now welcomes guests and visitors who are captivated by the original grand staircase and fireplace, the latter still bearing the hand-carved seal of the Sisters of St. Joseph. Two smaller rooms on either side of the central area provide space for daily and special events.

The TMLA Service Homerooms meet each morning in this location. These homerooms provide students with an invaluable and unique oppor- tunity to work with other students and faculty committed to issues con- cerning health, environment and social justice, all long-time concerns of the Sisters of St. Joseph. 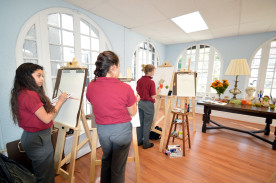 The original convent refectory now houses the multi-award winning TMLA Robotics Program. Also locat- ed on the first floor is the TMLA Math Lab. Under the direction of Sister Linda Pero, C.S.J., students gather here during their unscheduled time for advanced and supportive instruction in math. The Math Lab is also home to the GEM group, that is Girls Enjoying Math, which provides opportunities for students to do in-depth research in mathematics.

The convent’s original kitchen now welcomes the Baking/Cooking Club as well as the cultural clubs who prepare various ethnic dishes. The Italian Society, under the direction of Nicholas Maurantonio with assistance from Sister Margaret Secour Anella C.S.J., prepares delectable Italian dishes weekly in the updated kitchen. The rear sun parlor, which once opened to the patio complete with working fountain, now houses the advanced painting classes, where art students enjoy and use natural light.

Finally, the chapel, the first addition to the original convent building and opened on Jan. 1, 1937, has been refurbished with all original pieces including statues of Joseph and Mary which were taken from the Church of St. Malachy in Rockaway Park after it was closed and brought to the new chapel at TMLA. It is believed that these statues are over 125 years old. 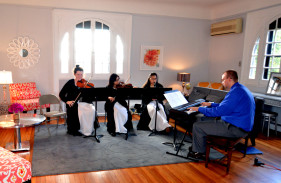 Over the past 78 years since the establishment of The Mary Louis Academy Convent, 20,000 young women have carried forth the charism and mission of the Sisters of St. Joseph with many more ready to continue the tradition.