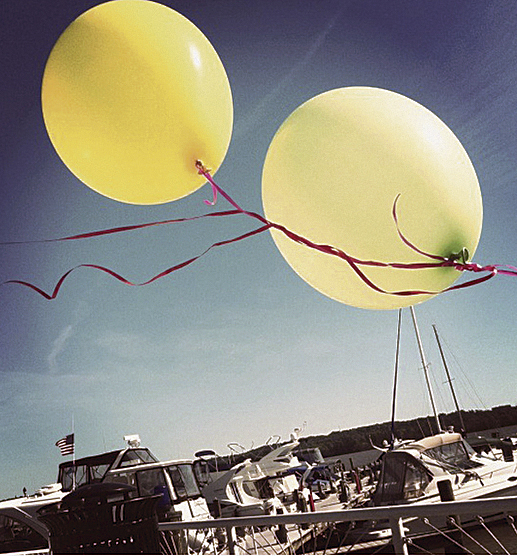 EDGEWOOD, Iowa (CNS) — In 2001, Abbie Steger, then in second grade, took part in a tradition that has been going on for decades at St. Mark Church in Edgewood.

On the Sunday after Easter, the small, tight-knit parish’s first Communion class stands on a lawn outside the church and releases balloons. The colorful spheres fly into the sky carrying a poem and a personal message by each child.

The note asks whoever finds the balloon to contact the parish to let the child know where it ends its journey. The balloons travel far and wide, in some cases bringing people closer to God.

Steger, now a 20-year-old sophomore at the University of Northern Iowa, can attest to that. Recently, about 11 years after her first Communion day, she received word that the parish heard from people who found the note that was with her balloon.

“It was unbelievable,” said Steger. “I was in total shock. I never thought it would be returned.”

Jody Kerns, the current director of religious education at St. Mark’s whose own son happened to be in Steger’s Communion class, contacted Steger’s mother to let the student know that the couple who found her note had returned it.

“(The note) was very worn, but surprisingly you could read all the print,” Kerns told The Witness, newspaper of the Archdiocese of Dubuque.

Steger’s balloon had floated onto a farm in Hatfield, Wis. Mark Harwick, who owns the property with his wife, Kathy, found the note after a huge flood. It was recovered in a culvert near a swamp. Kathy Harwick called the parish directly.

Each child’s note is laminated to help preserve it, but no one expected them to last for over a decade. If a child hears back about a note, usually it’s within the first year, according to Kerns.

“We’ve received some back with the balloon still attached,” she said. “Typically, the person who finds it will send a note or say something about how they found it.”

In Steger’s case, Kathy Harwick told Kerns her husband actually saw a rainbow at the time he found the note, and it reassured him spiritually at a difficult time. Steger said the incident affected her too.

“It showed me that God is still out there and that there are miracles out there,” said Steger. “One little note can make a difference.”

Kerns has seen the impact of the balloon project over many years preparing first Communion classes. The tradition was started more than 20 years ago, before her time. The classes prepare the balloons at a daylong retreat a few weeks before they receive the sacrament. The students and parents also bake bread together and then give it to others in the parish.

Steger’s balloon was returned after the longest time, but some notes are returned every year. The farthest a balloon has traveled is to the Smoky Mountains of Tennessee where a local man found it.

“That gentleman wrote a really nice letter,” recalled Kerns. “Every Sunday morning, he would walk in the woods and pray. He found the note, took it back to his church and they prayed for the child.”

Sometimes, it’s not the place where a balloon ends up, but the time it is found that is important.

“A lady was coming home from a family member’s funeral,” said Kerns. “The balloon was sitting right in the driveway. She believed it was a message that everything was OK.”

The return of Abbie Steger’s note reminded Kerns about the ultimate purpose of the balloon project.

“I think it enhances the joy of the day,” said Kerns. “I look at first Communion as a very joyful occasion. This exemplifies the meaning of first Communion — that feeling of pure joy.” [hr]

Russo is on the staff of The Witness, newspaper of the Archdiocese of Dubuque.