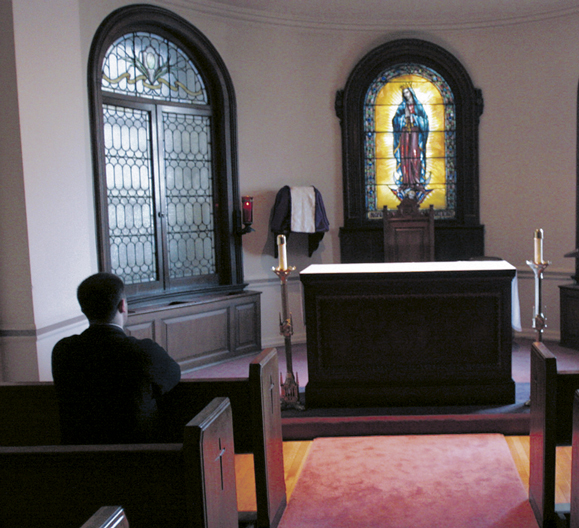 As major seminarians from the Dioceses of Brooklyn and Rockville Centre join their counterparts from the Archdiocese of New York this fall at St. Joseph’s Seminary in Dunwoodie, they will discover a place that has educated and formed men for the priesthood for more than a century.
Along with men from parishes of the archdiocese, Dunwoodie seminarians in recent years have included a steady cohort from the Franciscan Friars of the Renewal, and others from dioceses in South America. Other religious orders and dioceses also send their future priests to St. Joseph’s. In fact, this year’s graduating class includes two men who will be ordained for the Diocese of St. Catherines in Ontario, Canada.
This year’s class includes two men who will be ordained by Cardinal Timothy Dolan at St. Patrick’s Cathedral on Saturday, May 19. One is Deacon Patric D’Arcy, 33, another Canadian, who is to be ordained a priest of the Archdiocese of New York.
He said that the prospect of an increased number of seminarians at St. Joseph’s through the interdiocesan partnership with Brooklyn and Rockville Centre would be a welcome addition with the potential to lead to a “more personal and richer experience.”
“With more seminarians coming here, it will be helpful for our formation,” he said. “We help to form each other.”
Deacon D’Arcy said his own priestly formation benefited greatly from interaction with the current seminary rector, Auxiliary Bishop Gerald T. Walsh, whom he cited as a good example “of a pastor and a parish priest.” The bishop, he said, kept his office door open and made himself available to the seminarians.
“He has a lot of pastoral experience that he brought to talks and interactions with us,” Deacon D’Arcy said of Bishop Walsh, who is himself a Dunwoodie graduate, Class of 1967.
A significant highlight of Bishop Walsh’s tenure as Dunwoodie rector took place in April 2008 when St. Joseph’s had the honor of hosting Pope Benedict XVI for a visit that included a large youth rally on the grounds and a more intimate gathering with youngsters with disabilities and their families and caregivers in the seminary chapel. (It was the second time a pope had visited St. Joseph’s, the first coming in October 1995 when Pope John Paul II addressed the seminary community in its own chapel.)
Bishop Walsh said he regarded the chapel ceremony as the high point of Pope Benedict’s visit to Dunwoodie. “He touched every child; that’s what you do to communicate with them,” the bishop said. “He blessed each one. ”
Three academic degrees are offered to the major seminarians at St. Joseph’s. The first is a master of divinity degree earned by all graduates. A master of arts in theology is also offered at the end of the program. Seminarians are also offered a bachelor of sacred theology (STB), awarded by the Pontifical University of St. Thomas Aquinas (the Angelicum).
These programs will remain in place, with a review of courses to reflect features of the curriculums of St. Joseph’s and Seminary of the Immaculate Conception, Huntington, as they join together, said Father James Massa, a Brooklyn priest who is transition coordinator for the interdiocesan partnership and will serve as a faculty member and director of assessment at St. Joseph’s Seminary.
The fourth degree program, currently offered by the Institute of Religious Studies at St. Joseph’s, is a master of arts in religious studies. Plans call for its development into a master of arts in theology degree that would reflect the strengths of both St. Joseph’s and Immaculate Conception’s programs for the laity, Father Massa said.
A new degree program, which Immaculate Conception currently provides that is being added to the Dunwoodie’s offerings, is a master of arts in pastoral studies. It has been offered to permanent diaconate candidates for the Diocese of Rockville Centre.
Another new degree program, offered to seminarians with a bachelor’s degree who are studying at Cathedral Seminary House of Formation in Douglaston, will be a master of arts degree in Catholic philosophical studies.
Father Massa stressed the developments are all being coordinated with St. Joseph’s two accrediting agencies: Association of Theological Schools (ATS) and Middle States Commission for Higher Education (MSCHE). By the summer of 2013, there will be one unified program for all academic degrees, coordinated from Dunwoodie, Father Massa added.
Msgr. Peter Vaccari, who will become the rector of St. Joseph’s at the start of the new academic year July 1, is a priest of the Diocese of Brooklyn who has served on the faculty of Seminary of the Immaculate Conception in Huntington since 1988 and as rector there since 2009.
He said he is looking forward to working in collaboration with other Dunwoodie faculty members. The fundamental lesson of effective seminary training, he said, is “the call to holiness, the holiness of the priest through a constant conversion of mind and heart as he seeks to cooperate with the grace of God.” He emphasized it is God who issues the call to a priestly vocation, who shapes and sustains it and who brings it to fulfillment.
Msgr. Vaccari said the program of priestly formation emphasizes the need to integrate the pillars of formation – human, spiritual, intellectual and pastoral – as seminarians seek to model their lives on the life of Christ, the Good Shepherd.
“The program is about an encounter with the crucified and risen Lord,” Msgr. Vaccari said. “It is about the way in which the seminarian will enter into a deep relationship with him and his mystical body, the Church.”