More than 34,000 pounds of material goods collected from the Diocese of Brooklyn are in the hands of Caritas Puerto Rico.

In mid-October, Bishop Nicholas DiMarzio encouraged parish pastors to take up collections to send to the island after the devastation of Hurricane Maria and nearly a month later, all donated items from more than 60 parishes have reached the San Juan headquarters.

According to a statement by Catholic Charities of Brooklyn and Queens, by the end of November, 100 pallets were taken by the New York Army National Guard, which would ship and distribute the donations in collaboration with the National Guard in Puerto Rico.

Those numbers don’t take into account Catholic Charities’ first FedEx shipment at the beginning of November when more than 70 boxes of requested essential items meant 4,000 batteries, 400 flashlights and other medical supplies made it to the island first.

Catholic Charities’ vice president for mission spoke about the small business owner from St. Rita’s parish in East New York who generously offered to assist the diocese with the final delivery – which meant taking all 100 pallets from the Immaculate Conception Center in Douglaston to National Guard armories throughout New York City. 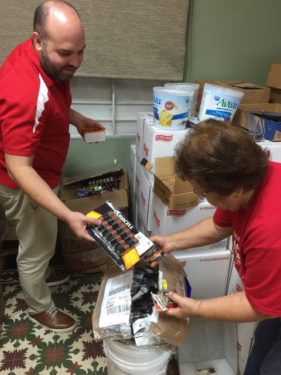 Out of the 100 pallets delivered, 28 of them consisted of stacked cases of water bottle packages, while the remaining 72 pallets varied from food and diapers.

For the man who volunteered his two freight trucks for two days in order to deliver the pallets to the New York Army National Guard armories, he expressed his restlessness with the lengthy timetable of events, but said his response was still to get involved.

“I want the diocese to know that Deanery 6 not only donated, but delivered all the pallets for them,” said Giustizia. “When God’s call comes, it comes.”

While the athletic complex at Immaculate Conception Pastoral Center in Douglaston no longer needs to be reserved as a storage center for Puerto Rico donations, the images of disaster and destruction are still vivid in Jorge Dominguez-Lopez’s mind.

The editor of Nuestra Voz, the diocesan Spanish newspaper, reported about the devastation in October. He traveled throughout the island, touching base in Caritas Puerto Rico’s San Juan headquarters to one of the hardest-hit areas miles away in Punta Santiago.

“I think the Catholic community has done a great job showing generosity and solidarity with their fellow Christian/Catholics in Puerto Rico,” said Dominguez-Lopez. “But after almost three months, more than half of the population is still without power and thousands and thousands are without drinking water. The solution cannot be just charity.” He then referred to Pope Pius XI when the former pope spoke about the conceptual formulation of “political charity” that could fight against injustices around the world.

“I think Puerto Rico needs that kind of charity so authorities can do what they have to do.”