WINDSOR TERRACE — Msgr. Bernard Quinn is a perfect candidate for canonization. That’s what one repeatedly hears when talking to clergy and laypersons in the Diocese of Brooklyn advocating for sainthood for the late, great church pastor.

Msgr. Quinn (1888-1940), who was an Irish-American, was a visionary and the driving force behind the establishment of St. Peter Claver Church in Bedford-Stuyvesant in 1922 — the first church in the diocese to serve a black congregation. He also founded the Little Flower House of Providence, an orphanage that cared for many children in Wading River, Long Island. 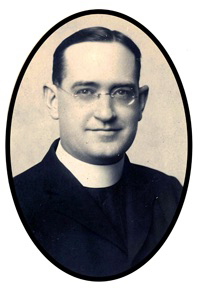 He literally went out to the streets to look for black Catholics and encouraged them to come to St. Peter Claver. He set up the parish’s school and turned it into a community center so that kids would have a safe place to play.

The cause for canonization is well underway. In 2019, Bishop Nicholas DiMarzio accepted the findings of an investigation into Msgr. Quinn’s life to determine if he was a suitable candidate for sainthood. The investigation was thorough and took nearly 10 years to complete.

Bishop DiMarzio declared Msgr. Quinn a “Servant of God” and delivered the investigation findings to the Vatican for review by the Congregation for the Causes of Saints.

The main advocate for the canonization cause is Msgr. Paul Jervis, who serves as the postulator. Msgr. Jervis is the current pastor of St. Francis of Assisi-St. Blaise Parish and St. Peter Claver Church’s former pastor. He wrote a book about Msgr Quinn called “Quintessential Priest, the Life of Father Bernard J. Quinn” in 2005.

Msgr. Jervis said he first became interested in Msgr. Quinn when he served as pastor of St. Peter Claver.

“I read his writings. The more I read, the more impressed I became,” he said.

Delores Casey, president of the Father Bernard John Quinn Guild, said he instilled pride in the black community. “He cared for them, and he fought to make their lives better,” she said.

The guild was formed in 2009 to promote the cause for canonization and raise funds for that effort. The guild encourages people to pray for Msgr. Quinn.

Before the COVID-19 pandemic, the guild made an annual pilgrimage to Wading River, where Msgr. Quinn is buried.

They set up a website: fatherquinn.org for people to learn about him.

The guild has Father Bernard John Quinn in its title instead of Msgr. Bernard Quinn, Casey said, because he was a humble man who would often tell people to address him as Father.

“He was a man who was interested not only in the spiritual aspect of his parishioners. He was interested in making them non-marginal, as they were being treated,” said Casey.

“He emphasized education. He had the elementary school that he built from donations. He introduced parishioners to a credit union to show them how to manage money. He also wanted them to know about the accomplishments of their own people,” Casey said.

The long road to sainthood

There are different steps in the process of becoming a saint in the Catholic Church. First, a candidate must be deceased at least five years to be considered, although there can be exceptions, as in the case of Saint Pope John Paul II, whose process for his canonization began in 2005, the year he died. 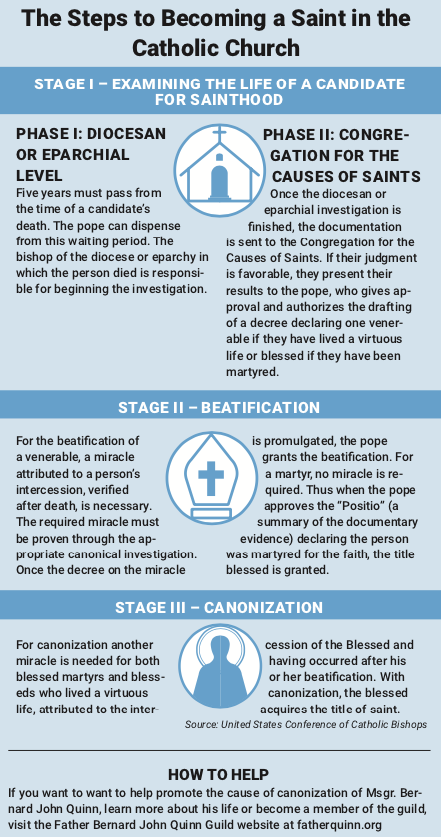 The next step is to be declared a Servant of God, a bar that Msgr. Quinn has cleared. After that, if the Congregation for the Causes of Saints sends favorable findings to the pope, the pope can declare the candidate to be Venerable. It has to be proven that the candidate performed a miracle to reach the step of beatification.

The final step, canonization, cannot take place unless a second miracle is verified.

Msgr. Quinn is an important historical figure, and his life deserves attention, particularly at this moment when the nation is undergoing a racial reckoning, said Msgr. Jervis.

“What he did is very relevant to the present situation where there is a lot of racial conflicts. Even though his primary ministry was to the African American people, he did an excellent job of bringing all people together. Thousands of white people also went to that church. They had not had much dealings with blacks. But when they went to church, they found that they had much in common with them,” Msgr. Jervis said.

Msgr. Quinn established St. Peter Claver Church to provide a place of worship for black Catholics at a time when blacks were not welcome in many predominantly white parishes.

“He put up with a lot and was also, I think, a very holy man,” Bishop DiMarzio said. “We can see how he handled things. He could have been very bitter. He could have given up many times. But he did not. That’s the kind of people we want to admire.”

Father Cox said he believes that as Msgr. Quinn brought people together, the cause for his canonization can serve as a unifying force.

Click the image below to see the full “Prayer for the Canonization of the Servant of God, Msgr. Bernard John Quinn” 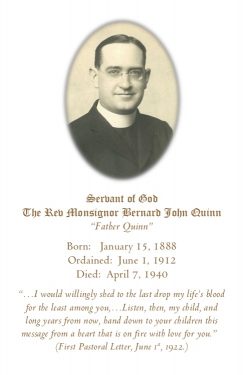