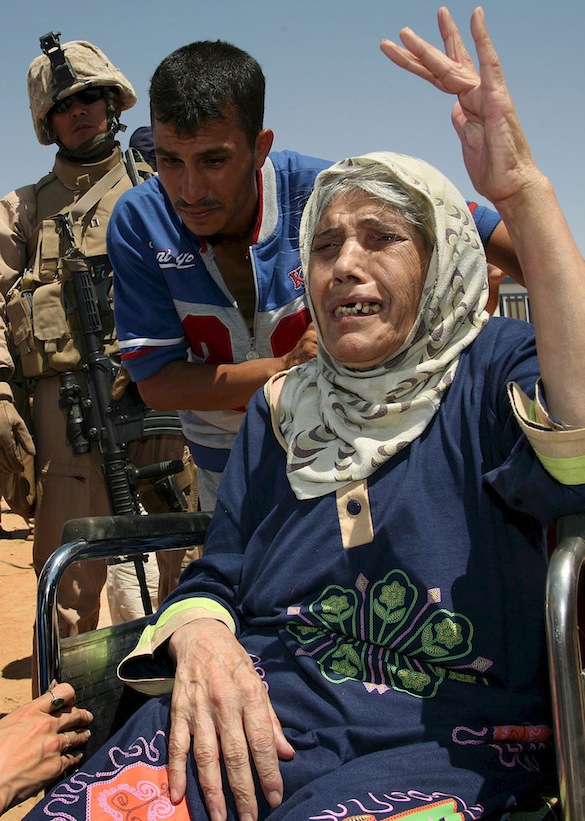 WASHINGTON (CNS) – In the days that followed Pope Francis’ Aug. 18 remarks on U.S. airstrikes earlier in the month against Islamic State, the buzz was about whether the pope had actually given his consent to them.

The more sobering post-buzz reality is how one stops what, in the pontiff’s words, is an “unjust aggressor.”

Does the U.S. go in, alone or as part of a broader coalition of nations? Or, to use the language of just-war theory, is the U.N. the “competent authority” to judge these particulars?

Pope Francis appeared to endorse the U.N. during his in-flight news conference returning to the Vatican from South Korea.

“The U.N. charter permits military intervention in response to armed attack at the invitation of a legitimate government or with the approval of the U.N. Security Council,” said Gerard F. Powers, professor of the practice of Catholic peacebuilding at the Kroc Institute for International Peace Studies at the University of Notre Dame, South Bend, Ind.

“In this case, you can make the case that the unilateral intervention is, from a legal point of view, legitimate, because it’s at the request of a legitimate government, in this case, the Iraqi government,” he added.

“We should try to build as big a coalition as possible, and the U.N. is a venue to do that,” said Jim Nicholson, who was U.S. ambassador to the Vatican during the first term of President George W. Bush. “President Bush tried to do that before going into Iraq (in 2003). He got very close,” but was ultimately unsuccessful, he added.

Speaking about the Islamic State situation, Nicholson said the U.N. was “a legitimate place” to try to build a coalition.

“It’s interesting to analyze whether that becomes sort of the collective prudential judgment to fulfill that justification. Does [the U.N.] then become the body that’s responsible for the common good? I think you could probably argue that, yeah, it could be legitimatized that way, that they could collectively begin to take steps. I think the United States would certainly welcome that.”

Nicholson said trying to convince the Vatican of the U.S. justification to invade Iraq in 2003 was “the biggest diplomatic challenge I had in the four years I had as ambassador. In January of 2003 at his annual address to the diplomatic corps, [St. John Paul II] looked right at me and said, ‘No to war,’ and he went on to say that war is a failure of mankind – the last resort – and that war should never be prosecuted when there are any other alternatives remaining.” And despite bringing in Catholic philosopher Michael Novak and papal biographer George Weigel to bolster his case, Nicholson never succeeded in changing the pope’s mind.

Robert George, McCormick professor of jurisprudence at Princeton University, N.J., and the former chairman of the U.S. Commission on International Religious Freedom, advocates military action against Islamic State. He recently launched an online petition, already with more than 12,000 signatures, calling for Islamic State’s military destruction in order to protect religious minorities in the region.

George said a “better model” than 2003 is “(President) George H.W. Bush in the first Iraq war (in 1991). Most of the world united to evict Saddam Hussein from Kuwait.

“He (Bush) got a lot of criticism for not deposing Saddam at the time. The principle was that you can’t permit one nation to invade another nation with impunity in order to acquire territory. Bush held back from deposing him,” George added. “When you create a coalition like that, you stick to what the coalition’s goals are. And you don’t go beyond what the nations agreed to.”

Neither George nor Nicholson discount the nature of the threat.

“Force is justified when it’s necessary to protect innocent people against atrocities. Christians, Yezidis, Shia Muslims, even some Sunni Muslim communities in Iraq are being subjected to genocides,” George said. “There is no other way to prevent these genocides – burying people alive, cutting off people’s head, raping women, torturing people. Negotiations are impossible. There are no borders to push them back to. I know of no one who thinks we have a hope of protecting them,” absent military action.

“I raised the questions again in this moral justification of today’s weaponry and today’s communication and the mindset that this caliphate has,” Nicholson said. “Do you have to wait until you yourself become a victim, or do you take action to protect your people and assist others? I think it’s the subject of just enormous importance. And it needs to be dealt with posthaste.”

Notre Dame’s Powers said any confrontation with Islamic State fighters would not be just another engagement in Iraq.

“It’s important to first understand that we’ve been deeply involved in the conflicts in Iraq one way or another for decades,” dating back to the 1980s when Iraq invaded Iran twice, he said.

Powers said then-Secretary of State Colin Powell’s invoking the apocryphal Pottery Barn rule in 2002 – “you broke it, you bought it” – is “not quite the aphorism” that applies to Iraq. Instead, he added, “we broke it and we need to help fix it.”