NEW YORK  — As President Donald Trump visited a Washington-based shrine to St. Pope John Paul II Tuesday, the Catholic archbishop of the nation’s capital has issued a stinging rebuke to the site’s organizers, calling the decision “baffling and reprehensible” and characterizing it as a politicized photo opportunity.

Trump’s visit to the shrine, where he was joined by First Lady Melania Trump, comes less than twenty-four hours after police used tear gas to dislodge protesters in downtown Washington in order to for Trump to visit St. John’s Episcopal Church across from the White House, while the nation has devolved into widespread unrest following the killing of an unarmed black man in Minneapolis named George Floyd by police officers.

One of those officers, Derek Chauvin, has been not only fired but arrested and charged with both murder and manslaughter in the death.

“I find it baffling and reprehensible that any Catholic facility would allow itself to be so egregiously misused and manipulated in a fashion that violates our religious principles, which call us to defend the rights of all people even those with whom we might disagree,” said Archbishop Wilton Gregory in a statement just after 11:00 a.m. on June 2, the same time the president was due to arrive at the site.

“St. Pope John Paul II was an ardent defender of the rights and dignity of human beings,” wrote Archbishop Gregory, who was installed last May as the city’s first African American archbishop. “His legacy bears vivid witness to that truth. He certainly would not condone the use of tear gas and other deterrents to silence, scatter or intimidate them for a photo opportunity in front of a place of worship and peace.”

During this visit, the president took a photo at a statue of St. Pope John Paul II but did not deliver remarks. According to the White House pool report, the President and the First Lady were also scheduled to visit the Luminous Mysteries Chapel, the John Paul II Blood Relic, and a Madonna Icon.

As the president arrived at the shrine, he was greeted by protesters from a number of Catholic social advocacy groups, including Pax Christi USA, Maryknoll Sisters, Franciscan Action Network, and NETWORK Lobby.

The St. John Paul II National Shrine is both a house of worship and a cultural center, and is an initiative of the Knights of Columbus, a Catholic fraternal organization. Over the years, it’s been linked to a number of prominent conservative causes and has had a friendly relationship with a number of officials in the Trump White House.

To date, the Knights of Columbus have not publicly commented on the visit by the president, nor did they respond to The Tablet’s request for comment.

In a statement posted to social media on Tuesday afternoon, the Shrine said that the president had originally intended to sign an executive order on religious liberty during his visit.

“This was fitting given St. John Paul II was a tireless advocate for religious liberty throughout his pontificate,” they wrote as a justification. “International religious freedom receives widespread bipartisan support, including unanimous passage of legislation in defense of persecuted Christians and religious minorities around the world.”

Ahead of the president’s arrival at least two Catholic bishops took to Twitter to express disappointment.

“As Trump visits the St John Paul II National Shrine today, I hope someone proclaims today’s Gospel (Mark 12:13-17) where Herodians and Pharisees are called out for their hypocrisy,” wrote Bishop John Stowe of Lexington, Kentucky.

Archbishop Gustavo García-Siller of San Antonio also drew on the Gospel readings from today, saying the scripture “addresses the Pharisees and Herodians to practice justice and honesty as demanded by the law of God.”

“With their hypocrisy they denied God what is due to him. The story repeats itself these days: To use God versus to love and serve him,” he continued.

In the aftermath of Floyd’s murder on the streets of Minneapolis last week, Archbishop Gregory used the occasion to call out the sin of racism that he said continues to plague the Catholic Church and the country, while encouraging nonviolent protests as a means of resistance.

“As a society, must find ways to understand and to respond to the pain of our brothers and sisters. We see racism destroying the lives of Jewish, Muslim, and Christian people because of their religious and ethnic heritages. Racism triggers the divisive and xenophobic attitudes of nationalism,” he said on May 31.

“It also targets people because of their cultural traditions or physical appearances and it threatens immigrant people who seek nothing more than the opportunity to improve their lives and the lives of their children.”

“We must non-violently and constructively work together to heal and build the ‘Beloved Community’ that was spoken about by the Reverend Dr. Martin Luther King, Jr,” he continued.

Jeanné Lewis, a current candidate for DC City Council At-Large and a Catholic, blasted the president’s back-to-back photo opportunities as a direct attack on the Church and Christ.

“Trump’s use of force against people, including Christians, exercising their rights in front of St. John’s Episcopal Church yesterday was an attack on Christ,” she told The Tablet on Tuesday. “The Church is two or three gathered in Christ’s name, and Trump authorized tear gas on the Church for a photo opportunity.”

“Protesters are calling for an end to racist systems,” she continued. “St. Pope John Paul II condemned racism in the United States. For Trump to discuss religious freedom at the Shrine the day after he called for violence against protesters is hypocrisy. The people and government of Washington, D.C. will do all we can to hold him accountable. But without statehood, we are limited.”

Raymond Arroyo, the host of the EWTN show “The World Over,” disagreed, taking to social media to defend the president’s actions.

“He is aligning himself with the anti-communism stance of the former Pope,” said Arroyo. John Paul II “relied on faith to usher in true freedom, justice, and peace in his homeland. May America heed his example.”

Stephen Schneck, the executive director of the Franciscan Action Network, who was present outside of the shrine on Tuesday estimated that there were nearly 1,500 protestors on hand, filling the lawns of the nearby Theological College and the Missionary Oblates of Mary Immaculate.

He told The Tablet that Archbishop Gregory’s statement circulated “like wildfire” among the protestors, which were a mix of Catholics and neighborhood residents.

Schneck praised Archbishop Gregory’s words as “so encouraging,” saying that he hopes they can help orient the U.S. Church in its ongoing struggle to confront white nationalism.

“While the letter the U.S. bishops released a few years ago was very good,” Schneck said of the first collective pastoral letter on racism issued in nearly 40 years, released in November 2018, he said now is the time to begin “formalizing those commitments.”

“That begins with letting people know our churches will not be used to support someone’s re-election campaign,” said Schneck. 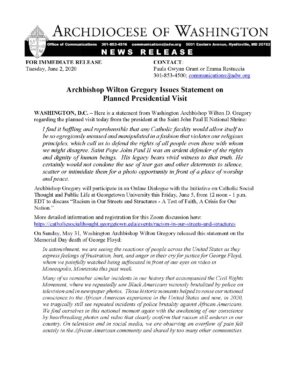 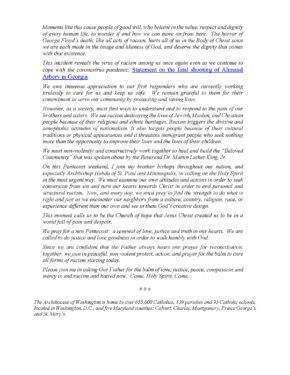