And for a few local youth basketball teams, the dream of playing on a professional court was recently fulfilled.

The Catholic Youth Organization (CYO) of Brooklyn and Queens was granted exclusive access to the arena’s main court prior to a recent Brooklyn Nets game.

“The Brooklyn Nets reached out to our diocese regarding a junior Nets program,” said CYO Director Rob Caldera. “Being that we’re in their backyard, we teamed up, and this is the first of many upcoming events between the CYO and the Brooklyn Nets organization.

“This was something that for each and every one of them, it’s a dream to play on a professional court where the pros that they love and watch get to play every day,” said Robert Evangelista, head coach of the St. Bernard team. “It’s a once in a lifetime experience that they’ll remember for the rest of their lives.”

Though the atmosphere of diocesan parish gymnasiums can get competitive, playing on the court at Barclays Center took on a much different feel for these young athletes – especially the length of the court.

“It was a good experience, and it was cool to play on a professional court,” said Robbie Evangelista, a sixth-grade St. Bernard guard.

This group of young athletes realized just how lucky they were, since these types of experiences were far from the norm back in the day.

“They were just ecstatic,” said St. Thomas Aquinas head coach Warren Midgett. “They just don’t know how to respond to this. When I was that age, these types of opportunities were few and far between.

After the CYO teams wrapped up their own games on the court, they then enjoyed seeing the Brooklyn Nets in action. Teams received discounted tickets to the game and even their very own Joe Johnson bobblehead doll.

By watching the professionals compete, CYO players can learn the basic fundamentals of the game as they continuously try to improve their skills.

“I can learn how to play from Dwight Howard and Brook Lopez with how to drop-step in the post,” said St. Thomas Aquinas center Dwayne Jason.

“I think what they can do is watch the game and they can see the consistency,” said St. Adalbert head coach Kevin Arias. “It’s just the way the game goes by, and that way they can see something that we can bring home and use toward our game.”

Since Caldera took over in July 2013, CYO has been active in creating these types of opportunities for its participants, including games on college basketball courts and even Madison Square Garden.

“It’s been a goal of mine since taking over the CYO a number of years ago to give them more opportunities than just playing regular season games,” said Caldera, adding that community outreach with professional and college teams goes a long way with the young athletes.

So maybe someday these CYO stars will suit up regularly at Barclays Center or other arenas around the country.

But for now, the thrill of playing on a pro court will not be wearing off anytime soon. 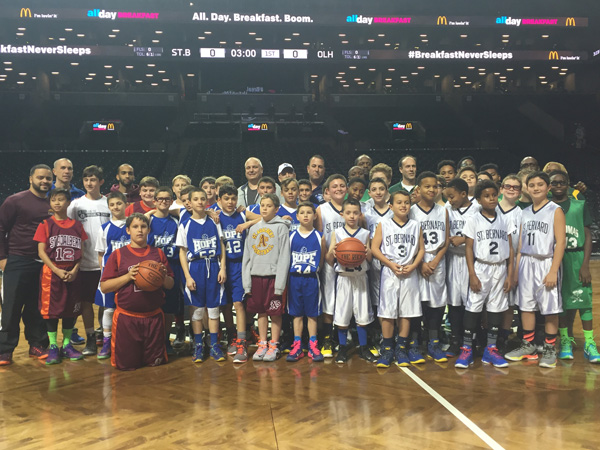