For the second straight year, the Catholic Youth Organization (CYO) of Brooklyn and Queens honored those who have made it their life’s mission to instill young athletes with the Catholic values of sports.

A 12-member class was inducted into the CYO Hall of Fame May 15 at Immaculate Conception Center, Douglaston. Auxiliary Bishop Raymond Chappetto celebrated Mass and thanked all the dedicated volunteers for sacrificing their time for the benefit of children.

The following were inducted: 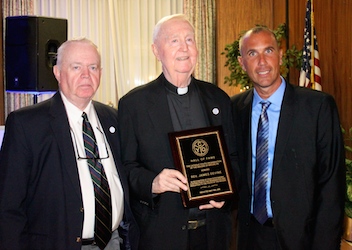 Father James Devine
Father Devine was ordained on May 28, 1960, and assigned as an assistant at Our Lady of the Blessed Sacrament, Bayside. The parish had just completed a new gymnasium, so he became heavily involved in helping to bring CYO basketball and swimming to the parish.

He retired from active duty in 2006 and currently resides at Immaculate Conception Center. 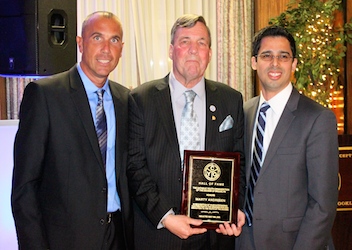 Marty Andresen
In 1973, Andresen answered the call of St. Francis de Sales parish, Belle Harbor, for boys’ basketball coaches. He was an assistant coach until 1981, when he became a head coach, a position he still holds today.

He helped introduce the parish’s Christmas Tournament in 1985 and the Saturday morning intramural program in 1988. He has also served on the diocesan basketball rules committee and as an assistant parish athletic representative (PAR).

Andresen also began coaching baseball and in 1978 became president of the Rockaway Little League, another position he still holds. 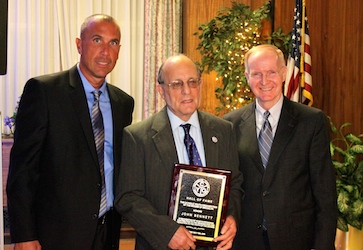 John Bennett
Bennett’s more than 40 years of service began as a track coach at St. Benedict Joseph Labre, Richmond Hill. In 1980, he became a founding member of the CYO Track Committee and is still a member.

While working as CYO track coordinator, he researched other CYO programs to help strengthen the local diocesan program. He has been instrumental in ensuring the majority of CYO track coaches are trained and certified in CPR and first aid.

Today, he serves as meet director for all CYO track competitions and is co-coordinator for CYO track. 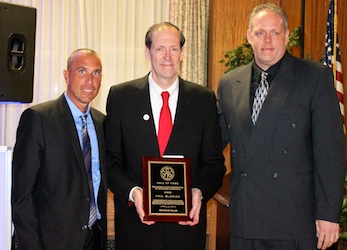 Phil McBride
As a six-year-old, McBride was the batboy for his father’s baseball team at St. Stan’s, Maspeth. He played baseball and basketball at the parish for 10 years before becoming an assistant coach to his father in 1969.

He began officiating CYO basketball games in 1971. He has also served as a CHSAA referee and was recently inducted into the CHSAA Hall of Fame. 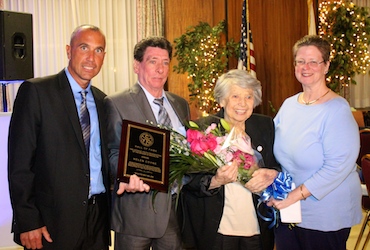 Helen Coyne
In 1965, Coyne started the girls’ CYO swim program at St. Sebastian, Woodside, to ensure young women were being provided the same opportunities as boys. She oversaw the entire program, including recruiting new members, training the swimmers, and developing a coaching staff.

She had high expectations of her swimmers both in and out of the pool. She stressed commitment, hard work, teamwork and respect. Her swim teams won 14 consecutive diocesan titles, but more important was instilling young women with strength, spirit and character. 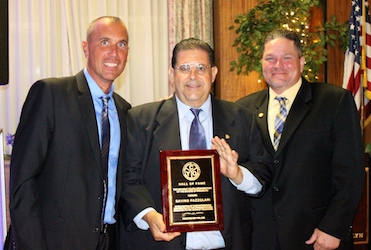 Savino Fazzolari
Fazzolari’s CYO coaching career began over 40 years ago at St. Stan’s, Maspeth, and continued with stops at St. Ann’s, Flushing, and St. Kevin’s, Flushing. At each stops he stressed sportsmanship, respect and cooperation.

He also has served as parish athletic representative, an official, member of the board of directors and rules committee and as CYO Queens supervisor. 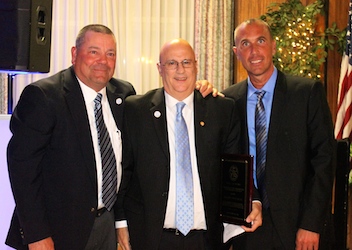 Robert Fristachi
Fristachi’s began in 1962 as a basketball and baseball player at St. Robert Bellarmine, Bayside. He coached at the parish when he was just 13 years old and later served as parish athletic representative.

He moved to Our Lady of the Snows, North Floral Park, in 1991 – a parish that did not have a CYO program. The program started under the direction of Mike McGovern, and Fristachi was one of the first basketball coaches, which he still does today.

He served as athletic director from 2006 to 2012. He has coached his stepsons Michael and Christopher, his daughter Cristina and his nephews Joseph, Antonio and Giancarlo. 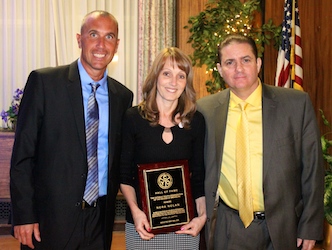 Nora Nolan
After playing CYO sports at St. Stan’s, Maspeth, Nolan wanted to give back. At Our Lady of Hope, Middle Village, she has served a coach, athletic director, vice president and parish athletic representative.

For the past 10 years, she has been the president of the Our Lady of Hope athletic association. She has also served on the CYO executive board for the last seven years.

Through her dedicated years of service, Nolan has made it a point to impart the goals, philosophy and mission of CYO while encouraging the development of Christian values. 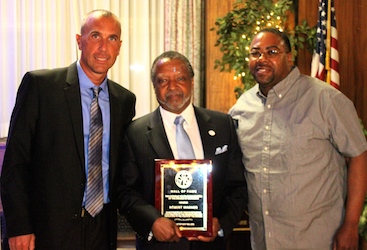 Robert Warner
Warner and his wife Nydia became involved with the Our Lady of Lourdes, Queens Village, track program in 1994 when their daughter enrolled. Nydia soon took over as head coach, while Robert served as an assistant and also helped out with the parish’s swim teams.

Warner was chosen as the PAR in 2001. He continued as a swim coach and still serves as an assistant track coach.

For over 20 years, he has been instrumental in encouraging spiritual growth, cooperation and community among the participants. 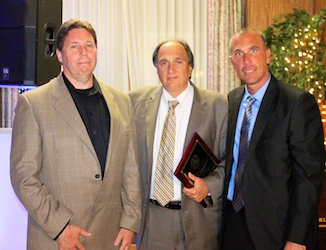 Nick Melito
Melito’s time with the CYO began as a baseball and basketball player at St. Mary Winfield, Woodside, in mid-1960s. He later became an assistant coach at the parish.

He went on to play baseball in high school at Msgr. McClancy M.H.S., East Elmhurst, and at the New York Institute of Technology, Brookville, L.I. He currently serves as the head varsity baseball coach at McClancy.

Each year for the basketball, baseball and softball diocesan championships, Melito offers McClancy’s facilities for the games. He also hosts baseball coaching clinics each winter for the CYO coaches.

His teams always played the game the right way, displaying teamwork, patience and sportsmanship at all times.

He was inducted into the Hall of Fame posthumously.

John Schuster
Schuster served as a basketball official and baseball umpire for over 30 years in the ’50s, ’60s and ’70s.

He was a generous man who always believed in helping underprivileged children. Whenever there was a big game, Schuster was typically assigned to officiate.

He was also inducted posthumously.

All photos taken by Jim Mancari.