JERUSALEM (CNS) – Israeli archaeologists have restored part of a 2,000-bed Crusader-era hospital run by the St. John of the Hospital order in the Old City of Jerusalem.

Dating to the 11th century, the ancient structure was operated by members of the order, dedicated to St. John the Baptist and also known as the Knights Hospitallers, precursors to the Rome-based Knights of Malta. The Hospitallers treated pilgrims of all faiths making their way to Jerusalem, according to historical documents.

Written mainly in Latin, the documents helped archaeologists piece together the history of the building, which more recently, until about 13 years ago, had been used as a fruit and vegetable market in the Christian Quarter.

For more than a decade, the site had been left locked and unused until the Waqf Islamic Trust, the building’s owner, decided to move forward with construction of a restaurant there. As with all new construction in Israel, the Israel Antiquities Authority was called in to carry out a salvage excavation prior to the work.

Located near the Church of the Holy Sepulcher and the Lutheran Church of the Redeemer, the structure had been known to archaeologists mainly because of the mapping of Crusader remains in the area in the 19th century, said Amit Re’em, excavation co-director for the antiquities authority.

“This was where the members of the St. John of the Hospital order lived. This is where it started. This was the first place where they used an ambulatory service to bring in sick and wounded people to the hospital. They had riders on camels and horses,” Re’em said.

Archaeologists found bones of camels and horses and a large amount of metal used in shoeing the animals during the excavation, but Re’em said he was unable to date the artifacts to either the Crusader era or to the later Byzantine era when part of the structure was used as a stable.

The building collapsed in an earthquake in 1457 and remained buried throughout the Ottoman period.

The excavation gave archaeologists the opportunity to clean the exposed section of the building, ridding it of garbage that had accumulated. Workers scraped away layers of paint and plaster on the walls, exposing the original walls for the first time in perhaps centuries, he said.

Crusader-era accounts describe the hospital as being comprised of various wings and departments where patients were sent for treatment according to the nature of their illness and condition, much like a modern-day hospital. Re’em said. In an emergency, the hospital could accommodate 2,000 patients. The hospital also functioned as an orphanage for abandoned newborns.

Despite the Hospitallers’ seeming efficiency, their knowledge of medicine and sanitation was poor, and the Arab Muslim population was instrumental in teaching them medical practices, Re’em said.

Building project manager Monser Shwieki said developers intend to incorporate the building into the planned restaurant. The site will be open to the public sometime in 2014. 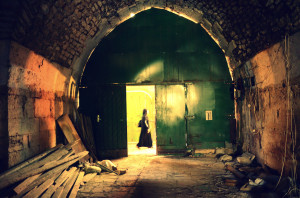