For the past few years, the seeds of a budding high school athletic program were planted and cultivated in East Flatbush.

The process took plenty of time and energy, but starting this fall sports season, the fruits of those efforts have bloomed.

The jump to the CHSAA began last fall, when athletic director Matt Kenny proposed the move to the school’s principal and president. The timing seemed just right, since the sports teams were experiencing a boom in interest.

“Right now, we honestly have a lot of good coaches, so just the fact that we have so many quality coaches, they really know they’re doing, they’re passionate and they’re committed,” said Kenny, who is also the boys’ soccer head coach.

Cristo Rey Brooklyn is in a unique position when it comes to sports. Each student works a job one day per week as part of the Corporate Work Study Program to help subsidize tuition. While work and of course schoolwork trump athletics, the dedication the student-athletes have shown in transitioning to the CHSAA has been unmatched.

“I believe the transition is going smoothly,” said Grace Vixama, head cross-country coach. “I also believe that we have some very talented runners and dedicated coaches to train them. Cristo Rey Brooklyn will fit right in with the rest of the league.”
There have been plenty of new experiences so far for the student-athletes, but they are adjusting in stride. Rome wasn’t built in a day, and neither is a high school athletics program. 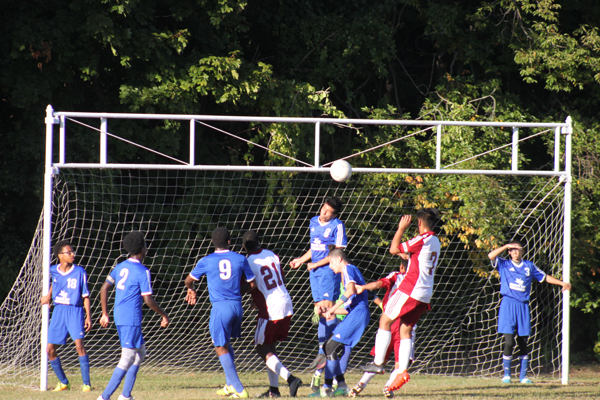 “This year, we are focusing on consistency,” said girls’ volleyball head coach Yasmine Daniels. “I realize that it may be unreasonable to expect all of the girls to learn everything there is to know about volleyball in just one season.

“They are still getting used to me as a coach, to the new rules and to playing as a team. I repeatedly say to them that I’m not looking for perfection. I only want to ensure that they are learning well and retaining the things that they learn to implement during the game.”

For boys’ soccer, the players that helped establish the program three years ago are now seniors. The team began playing in the charter school league, which featured seven-on-seven co-ed games being played on rooftops throughout the city. These players realize just how far they have come in a short time, now playing full 11-on-11 games on actual fields.

“The competition is definitely a higher level,” said senior midfielder Kenneth Fernandez. “I’m glad we made it into the CHSAA. We’re going to receive more players out of the community of New York. The transition is a hard one, but we are going to stay with it and hope for the best.”

“So far we have done well as a team and are developing very strongly,” said senior center back Allan Fernandez. “As a community and a school we are growing, and there are more opportunities to come.”

Right now, the focus is not winning league championships but instead establishing a foothold within the CHSAA. With small steps, the teams will be well on their way to achieving their long-term goals.

“Overall, I want each athlete to complete a cross-country race without stopping,” Vixama said. “Because for some, this is their first time running. I am more concerned about them completing a race rather than what time they finish it.”

“My overall goal for the first season in the league is to make a name for ourselves,” Daniels said. “Cristo Rey Brooklyn is filled with a number of talented athletes who do not always have the resources afforded to other schools within the CHSAA. That said, we continue to push these athletes to excel both in the classroom and in their respective sports.”

Patience is a virtue within all walks of life – especially high school sports. So as long as Cristo Rey Brooklyn continues to trust the process, the CHSAA will have another force to be reckoned with in the local sports scene.