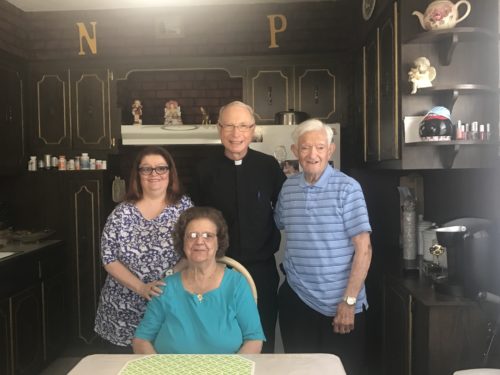 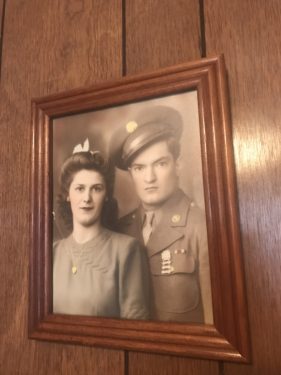 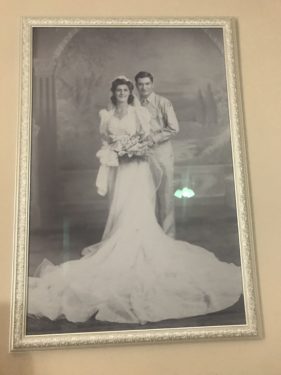 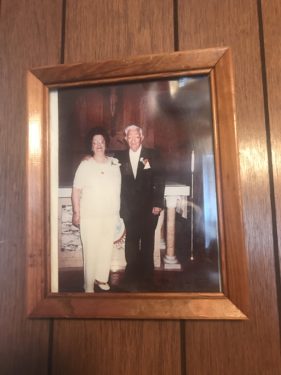 St. Leo’s parish in Corona has many riches to help build the kingdom of God including two worship sites, a strong English- and Spanish-speaking parish base and the 74-year-long marriage of Nicholas and Nancy Pennetti.

They recently renewed their wedding vows in the presence of their pastor, Father William Hoppe.

Nancy Arpaio and Nicholas Pennetti both went to P.S. 14 in the 1930s. Their families lived close to each other in Corona. Their mothers were friends and so let their children play together. Nancy and Nicholas have been friends for so long, neither of them can really remember how they met. They did not date right after grade school. Nicholas went on to high school and Nancy went to work.

Their friendship eventually kindled a romantic love and the two engaged to be married at 19. War, global or not, could not dampen their commitment to each other.

Soon after their engagement, Nicholas was drafted into the Army in 1943, at the height of World War II. After the initial weeks of his training, he was granted furlough to marry Nancy. They had family in New Jersey that was able to arrange a ceremony and dinner for them. And so, they married Aug. 5, 1943 at St. Anthony Church in Silver Lake, N.J.

After his two-week furlough, Nicholas went back to the Army and was sent to Texas. He remembers well when Nancy came to visit him. He was overjoyed, but soon realized he had more than just his country to protect. As he spoke of the visit, he jokingly put up his fist to show how he had to fight off all the other soldiers in his regiment when his wife showed up at the compound.

Nancy on her part said she had a number of suitors who vied for her attention, but she chose Nicholas and loved him through and through.

A year after they were married, Nicholas, still in Texas, received a telegram with a profoundly transformative message: “You have a son.”

Back in Corona, now a married woman, Nancy moved out of her family’s house down the block to Nicholas’ family house. Although her husband was in the Army, far away, she had the support of her family, including her four siblings, his family and her friends. As she settled into her new role, she was able to rent out a small apartment for herself and her baby, Richard, that she shared with her son’s godmother. The two friends helped and supported each other.

Nancy said she was surrounded by love and support from friends and family and waited for her husband’s safe return. Nicholas was serving in Germany in the Army field artillery. He knew he had to live and knew where to turn.

He made sure to attend the open air Masses offered for the soldiers.

Just before the war officially ended, he came home, in one piece.

“It was like Christmas,” he said. He returned to his beautiful family and caring community.

His priority now became finding a job to support his family. And so he did. He was the shipping manager at Saks Fifth Avenue for 10 years.

In 1946, the couple welcomed their second son, Robert, into the world.

They were getting cramped in their little attic apartment. So they saved and bought a house, just one block away from St. Leo’s Church, where they would still be surrounded by their family and friends. Soon after they moved in, they welcomed their daughter, Nancy.

One year after they bought the house, Nicholas was laid off. The elder Nancy recalls it as a scary time for the young family. But Nicholas said he is grateful. He ended up working for the City of New York as a motor vehicle operator. It came with much better benefits and more security.

Through it all, Nicholas and Nancy said they never stopped being friends and never stopped loving each other. That love overflowed onto their children and onto the whole community.

Having earned a house to themselves, they did not keep that treasure to themselves. The younger Nancy recalls her childhood home being filled with love and laughter. She said the family celebrated everything and always invited everyone. They had parties for holidays and birthdays. But they also celebrated the everyday. There were friends for the kids and the parents in the house everyday. And Nancy made sure no one was hungry.

The Pennettis love did not stop at their front door. The whole neighborhood knew they could rely on them. They have received multiple commemorations and certificates for their work in their community, but Nicholas best remembers the people. Among his proudest achievements was his work with the Corona Volunteer Ambulance Corps. He rushed people to the hospital so they could receive the life saving care they needed. Nancy also fondly remembers his work with the corps. She recalls the middle of the night calls, when he would rush out of the house.

“He was helping people,” she said.

That love for all is what defines her parents, their daughter Nancy said. They loved their children and made sure they loved and respected themselves, each other and those around them. She still remembers the day her mom found makeup in her bag in high school. It was among the scariest in her youth, and she maintains to this day that it wasn’t even hers.

Nancy said her mom ruled the house with an iron rod when need be. She wanted her children to stay close and out of trouble. Her parents supplemented their own parenting with education from St. Leo. Their kids all attended the parish school and received all their sacraments there.

Of course, Mr. and Mrs. Pennetti led by example and were deeply involved with the church. Nick has been president of many of the parish organizations including the ushers, the Holy Name Society and the Golden Age Club. Nancy was actively helping out in the church and from her kitchen, always supplying goodies for bake sales and parish events.

There was never a distinction between home and parish, Nancy, the daughter, recalls. She would spend time not just at school but also at the convent. The nuns also visited them at home. She was even once dressed as a nun when she was a little girl to represent the parish at a parade and she says it was among her proudest moments.

Priests, including the current pastor, Father Hoppe, continue to make frequent appearances at the home. Father Hoppe said he is grateful for the couple’s testimony of what “till death do us part” truly means.

Reflecting on his marriage, Nicholas happily said he would do it all over again. He continues to enjoy life with his best friend.