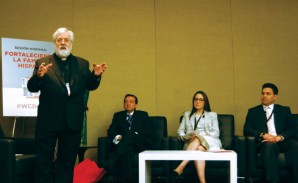 The history of faith is rooted in God’s communication with humanity through the Son, and it is through the family that one can encounter the gift of love. This was one of the topics discussed at a Spanish-language session before the diocesan celebration of World Communications Day, May 13, at the Brooklyn Marriott.

Dario Lopez Capera, host of NET-TV’s show Tu Fe Al Día, said the pre-session “Strengthening the Hispanic family” sought to open a dialogue about Pope Francis’s “message during World Communication Day and the importance of Latino leadership within the Diocese of Brooklyn,” where most of the migrant population is Hispanic.

During the session, Natasha Bisbal echoed Pope Francis’ message, saying that, “It is in the context of the family that we first learn how to communicate.”

Bisbal co-hosts Tu Fe Al Día (Your Daily Faith), a weekly Spanish language show that explores the Catholic faith and its meaning in the everyday lives of the Hispanic community.

The panelist focused on communication as an important part of the evangelization process and an integral part of family life.

Panelist Luis Alejandro Medina – a Telemundo journalist and author of the books “Mi lucha de Fe” (My battle of faith) and “Crónicas con Jesús” (Chronicles with Jesus) – said God’s message is one of mercy.

“It is from this mercy that we can re-edify and strengthen the family as a center of communication facing this world’s challenges,” he said.

One of these challenges is the need to work with different types of families at their current stage. This includes newly formed families, broken families with members in different countries, families with teenagers and multigenerational families caring for senior citizens.

Another challenge is technology, which can help people stay connected and informed, but can also make family members be “their own universe” and hinder communication.

“We have to recuperate that idea of being seated at the table and talking,” Medina said. “The essence of communication is conversation.”

Those conversations help families and children to forge an armor against the avalanche of conflicting messages and negative moral examples presented by the media.

Father Tomas Del Valle-Reyes, the pre-session’s moderator, said that to prevent bad influences prevalent in media, one could educate oneself, look for alternative media, and take advantage of every opportunity of communication – from church bulletins, to committees, to family dinners.

“We have the media, the tools, but what content we put out is up to us,” he said.

Father Del Vaye-Reyes is a radio host and founding president of Discovering the 21st Century, Inc., a nonprofit organization dedicated to serving the Hispanic community, mainly through social media.

After the panel, audience members expressed their opinions on how to support families in the diocese.

Luis Rivera, faith formation director at Our Lady of Perpetual Help Church, South Ozone Park, suggested to have a catechesis that involves the whole family.

“I think the focus has to be on a complete catechesis, not just for the child but for the parents who are facing incredible situations,” Rivera said.

Josefa Castro, community project director at Catholic Charities, said communication is crucial to strengthen Hispanic families, whose members she described as “warriors who faced many barriers to become part of this American society.”

“We also need to communicate to offer support to those around us,” she said. “We need to reach out to people who could help our Hispanic community to make families stronger.”

Panelists highlighted that communicators have the responsibility to share the message of the Gospel, to educate the community and to be an uplifting presence. They added that a family with God as its axis is a witness to salvation.

“The future of the church in this country is in our hands,” Father Del Valle-Reyes said. “We need to be a Church that is light for the people, a journeying nation that hears the Word, celebrates its faith and – as the Constitutions of the Church said – is not indifferent to the joys and hopes, sorrows and sadness of humanity.”