The bishop of Quibdo, Colombia, warned against the dangers of a falsely confident outlook on the progress of the South American country during his recent visit to the U.S.

It can be tempting to say that Colombia’s days of violence belong to the past, but that is simply not true, said Bishop Juan Carlos Barreto Barreto. He spoke before a predominantly Colombian congregation gathered for Mass at St. Joan of Arc, Jackson Heights, Oct. 30.

Bishop Barreto came to the U.S. to spread awareness of the plight of the Colombian dioceses of the Pacific coast. He appeared Oct. 28 before the Inter-American Commission of Human Rights to testify to the situation of the poorest population in his country.

He told the commission that although riches have been flowing into the country, the advantages lie with select groups.

According to the CIA Factbook, Colombia’s GDP has been on a steady incline, but the country as a whole lies as 10th in the world in family income inequality.

Bishop Barreto told the commission that he represents the poorest region in Colombia. The people there, he said, are plagued by three major adversities.

The first, he said, is the constant war-like conditions the people suffer. Paramilitary groups in the region and the dangerous drug trade endanger the safety and well-being of the entire region. 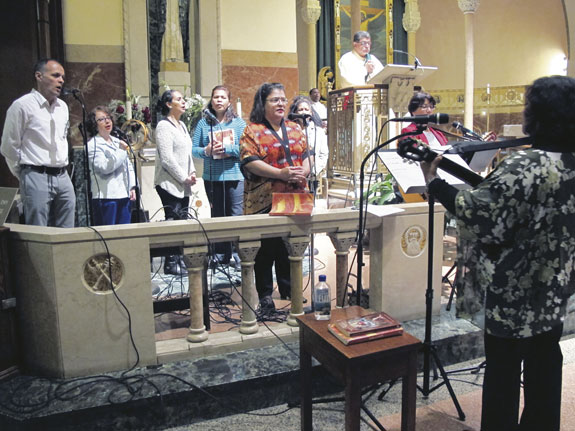 As the bishop spoke to the congregation at St. Joan of Arc, he told them that the most tragic victims of this violence are the children recruited by the paramilitary and guerilla groups. They are trained as soldiers from a young age. The government has recorded 6.5 million victims over a half century of internal armed conflict.

The third danger, he said, is the extreme economic poverty the people face. Although, the bishop said, some regions by the Pacific coastline have official poverty rates of 63 percent, the real numbers are closer to 90 percent.

Despite these great dangers the region faces, the bishop said, many people within Colombia do not understand the perils their fellow citizens face. He said the situation is often misrepresented in cities, such as Bogota, which is indeed improving. Therefore, he said there has been a new campaign released in June to help shine a light on the situation.

Church officials along with non-profits and NGOs have asked the Colombian government for help. However, the government does not seem sincere in its interest or efforts, the bishop said. Therefore, he said, they have come to seek international assistance.

The U.S. has made efforts and has dedicated hundreds of millions of dollars to halt drug-trafficking and the spread of paramilitary groups through Plan Colombia since the late 1990s. However, Bishop Barreto said this is not enough. He said there’s been a good effort, but a more radical approach is needed.

“One does not solve a problem that has been going on for decades with $400 million,” the bishop said in a written statement. “In the past, development plans were launched that did not work, and the community was not consulted. A serious and verifiable process is needed.”

At the beginning of his testimony before the Inter-American Commission of Human Rights, he said that the Church is first and foremost in the business of spreading the Gospel, which of course results in humanitarian efforts.

During his homily at St. Joan of Arc, the bishop said there is a force strong enough to change the fate of those struggling: the Gospel. Prayer is of paramount importance. He said he felt joy in his heart on the evening of Oct. 30.

“It is a joy to celebrate the Eucharist with you,” he said. “We hope to grow in fraternity with this Eucharist.”

“We will have a better country,” he said. “We will need to make certain efforts and certain sacrifices in order to make that happen.”