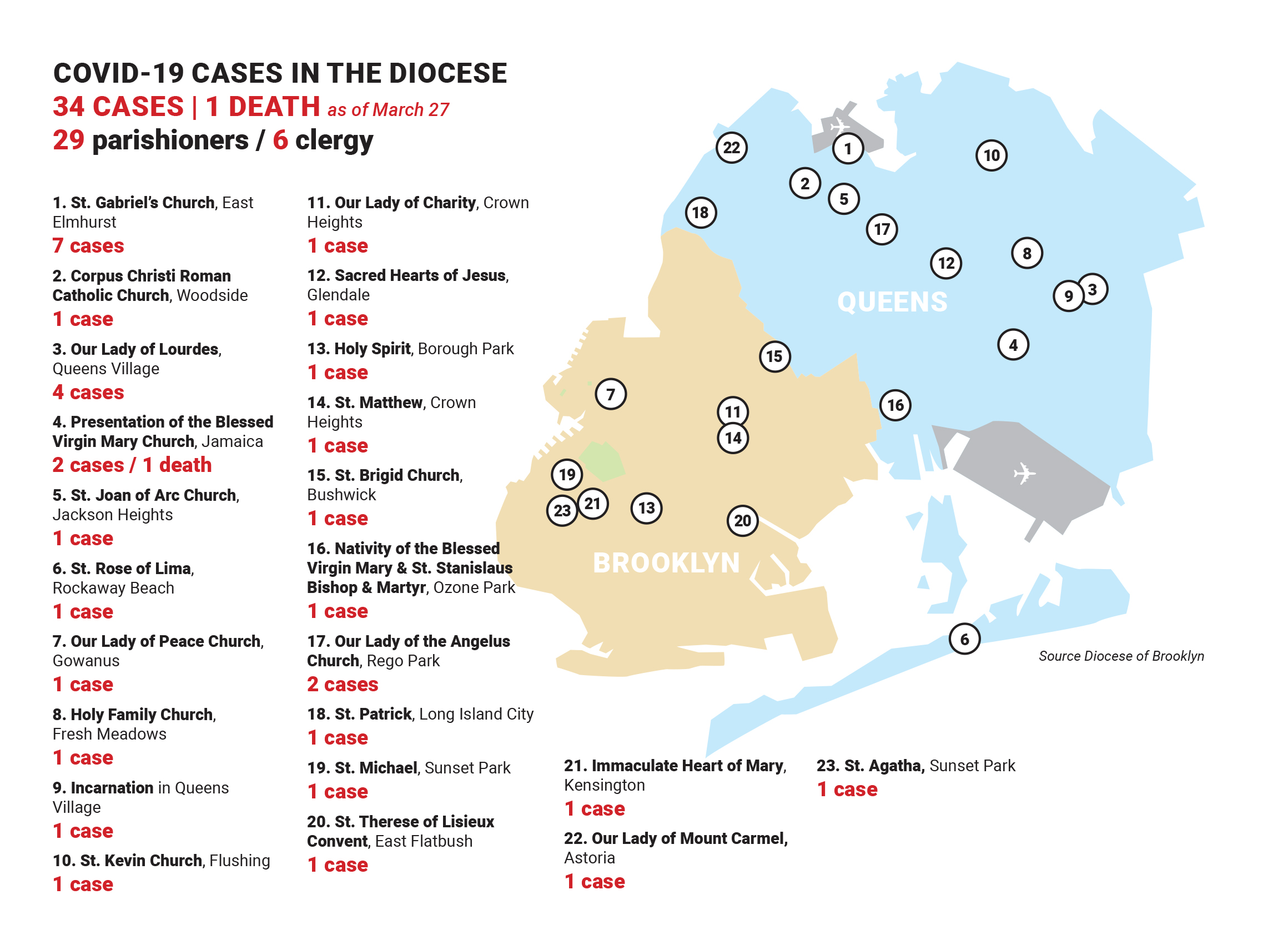 Click here to view this map in full screen mode.

WINDSOR TERRACE — While priests are unable to celebrate Mass publicly due to the COVID-19 pandemic, they are finding creative ways to serve their Catholic communities.

In addition to NET-TV’s transmission of Mass in seven languages, both on Sundays and weekdays, individual priests and rectories have been livestreaming Masses on their websites.

Father Joseph Fonti, pastor of St. Mel’s parish, Flushing, says he misses the physical presence of his people, but takes solace in the fact that so many people “are hungering for the Eucharist.”

“People want to be at Mass and are hurt that their churches are not open for them,” he said. “I feel the love of my people. I get some emails and some calls after the broadcast. I get calls checking up on us and asking if we’re okay and whether we need something, like food, or an errand run for us.

“It’s clear that the people love their priests and we love them. That brings a lot of comfort to these days.”

After suspending all public celebration of Mass in Brooklyn and Queens on March 16, Bishop Nicholas DiMarzio took the further step on March 20 of closing all churches “because of the growing danger of groups gathering and the possibility of the virus spreading.”

The bishop also mandated the closing of parish offices “in an attempt to keep people in their homes as much as possible for their own health and well-being.”

A diocesan directive said that most parish business could be conducted by phone.

The Diocese reminded pastors and administrators that precautions should be taken while hearing confessions. They should be limited to emergencies and, while they must be in person and on a one-to-one basis, social distancing should be enforced.

“When it is not possible for us to go to church, we can ask the Lord to come to our hearts and unite ourselves with the Lord. For many of us it is a great and new practice,” said Bishop Nicholas DiMarzio in a videotaped message to the Diocese.

At Our Lady of Angels parish, Bay Ridge, the three priests assigned there heard confessions outdoors in the schoolyard-parking lot, in two sessions on Saturday, March 21.

“This being Lent and people wanting to go to confession, we felt we should give them something,” said Msgr. Kevin Noone, pastor. He said about 15 people availed themselves to the sacrament and the parish plans to offer the sacrament again next Saturday from 11 a.m. to noon, and from 3:30 to 4:45 p.m.

Msgr. Noone explained that the site was set up so that participants were far enough away to maintain the proper social distancing to avoid passing on any virus. Father Jason Espinal, parochial vicar at Our Lady of Angels, livestreamed Mass from his parish, including a bilingual service, in English and Spanish, on Sunday, March 22.

Within hours, more than 80 thank you comments were posted to his Facebook site.

“This is going to be the strangest Lent we will ever experience,” he said in his homily, adding that he couldn’t imagine Holy Week without the liturgies and the service of light at the Easter Vigil.

“But I know that the Light of Christ can never be extinguished,” said Msgr. Hardiman.

The bishop also cancelled all funeral and wedding ceremonies “out of abundance of caution.”

“I think the toughest thing any pastor would have to do is to tell a parishioner’s family that they can’t have a funeral in the church that means so much to them,” said Msgr. Noone.

He added that he has asked Clavin’s Funeral Home to inform him of any parishioner’s death so that arrangements could be made to have some prayers said either at the home or the cemetery.

To assist people who may have trouble shopping for food, the bishop dispensed the faithful from the Lenten practice of abstinence that does not allow eating meat on Fridays. But a diocesan directive reminded everyone that the Fridays of Lent (and indeed all Fridays) remain days of penance and prayer.

He also noted that the annual Chrism Mass will be celebrated during Holy Week without a congregation and that the holy oils used for the sacraments that are blessed that evening will be available at distribution sites around the diocese.

While some have complained that churches should have remained open, the bishop’s directive to close seems to have been justified in the number of places that have had to be sanitized because of the presence of someone who tested positive for the virus.

At Holy Family Church in Fresh Meadows, a case was confirmed of a parishioner who attended a soup supper in the school hall on March 4.

Father Sean Suckiel immediately had the hall and the church cleaned and closed to prevent transmission.

“We have been very, very pro-active,” said Father Suckiel. “As soon as we heard about it, we had those places sanitized.”

The Diocese of Brooklyn has been announcing and updating confirmed cases of the Coronavirus. As of March 27, there had been 29 parishioners who tested positive.

The diocese also reported that six clergy members have been diagnosed as positive with the virus.