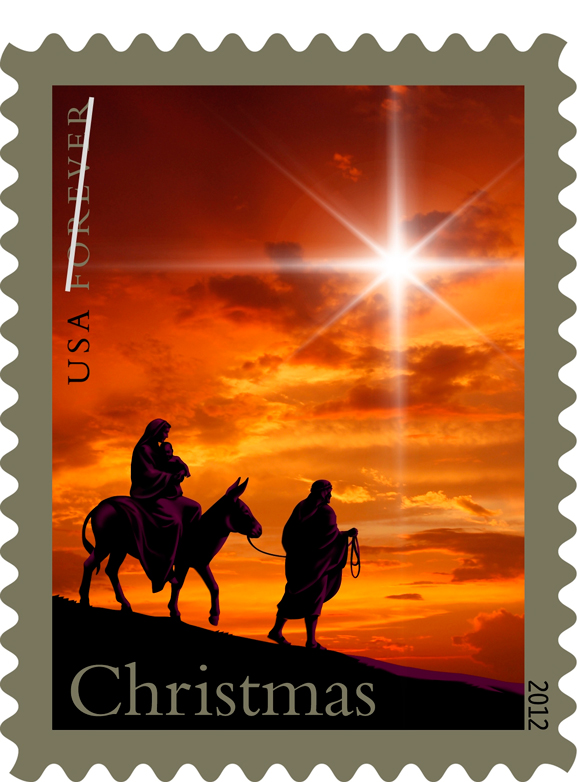 WASHINGTON (CNS) – When the U.S. Postal Service unveiled its new Christmas stamp Oct. 10 featuring an image of the Holy Family fleeing to Egypt, there was no uproar about religion in the public square, or in this case, rectangle.

“We didn’t get a single phone call or e-mail from anyone who took exemption to the stamp,” Roy Betts, a spokesman for the Postal Service, said Oct. 11.

“And with the speed with which people can respond today, they would have if they wanted to,” he added. He said he thought people were more concerned with other things such as the presidential election.

He also said the post office doesn’t “really get comments” about the holiday stamps in general, most likely because of the diversity of stamps — besides stamps with Christian imagery, there are those that commemorate Kwanzaa, Hanukkah and Muslim festivals.

As an aside, he said one year the Postal Service inadvertently left out the image of its Eid stamp – commemorating the Muslim festivals of Eid al-Fitr and Eid al-Adha – from a poster about its holiday stamps. The Postal Service heard about it, and then some, and within 24 hours, he said, new posters were displayed that included all the holiday stamps.

As he put it: “People are passionate about this (issue).” But right now, he added, “they’re not complaining.”

The diversity in stamps, which may have quelled the naysayers, is fairly new. The first U.S. Christmas stamp debuted in 1962 with a wreath, two candles and the words “Christmas 1962.” Four years later, the postal service issued what became more of the traditional Christmas stamp featuring a Renaissance painting of the Madonna and Child.

By contrast, the other holiday stamps took longer to get their corner of the market. The Hanukkah stamp marking the eight-day Jewish festival of lights debuted in 1996. The Kwanzaa stamp for the African-American holiday first appeared in 1997, and the Eid stamp was not issued until 2001.

Charles Haynes, a senior scholar at the Freedom Forum’s First Amendment Center, told Catholic News Service in an Oct. 11 e-mail that stamps with religious images aren’t a problem “as long as the government is acknowledging a variety of religious and nonreligious communities at various times of the year.”

“The fact that religious – including explicitly Christian – symbols are in the mix raises no First Amendment issue – but simply reflects our diversity,” he said.

Haynes noted that Christian symbols on stamps should only be allowed if a variety of other faiths are represented. “Government may not privilege one faith over others,” he added.

When the traditional Christmas stamp stood alone, it faced at least one sticky situation. In 1995, a Postal Service advisory committee voted to replace the traditional Madonna and Child stamp with a Victorian-era angel. This vote stirred such negative reaction that even then-President Bill Clinton got into the fray, prompting an immediate reversal.

Marvin Runyon, postmaster general at the time, said the Madonna and Child stamp would stay, at least while he was in office, because it “occupied an important place” for so many years and was “meaningful to so many Americans.”

This year’s Christmas stamp does not feature the traditional Madonna and Child image but instead a silhouette of the Holy Family on their flight into Egypt.

At the stamp’s unveiling at Washington National Cathedral, the Rev. Gary Hall, the Episcopal cathedral’s dean, said the stamp’s image has its own universal message.

He said the “story of this new family forced to leave their home” can remind people to care for those who are marginalized: “the poor, the elderly, the immigrant, and the refugee.”

He also said the image of the Holy Family “embarking for an unknown land” is a reminder that “we are in God’s hands and we trust in God to guide our journey.”

One thought on “Christmas Stamp Has A Timely Theme”