PHILADELPHIA (CNS) – With the same expression of serenity that he had shown for 13 weeks, Msgr. William J. Lynn listened to the criminal jury foreman speak the verdict of guilty on one charge of endangering the welfare of a child June 22 in a Philadelphia courtroom. 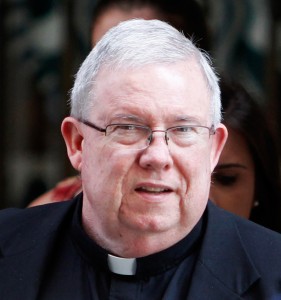 Msgr. Lynn becomes the first high-ranking Catholic clergyman in the United States to be convicted of a crime associated with the handling of priests accused of child sexual abuse, though he himself faced no charge of abuse.

According to guidelines mentioned by Common Pleas Court Judge M. Teresa Sarmina, Msgr. Lynn faces a sentence of six months to seven years for his conviction.

His sentencing hearing is scheduled for Aug. 13. The priest’s defense lawyers would not comment on whether they will appeal.

The Philadelphia Archdiocese as well as lawyers for the prosecution and defense had been bound from commenting on the trial since it began March 26. Sarmina lifted the gag order at the trial’s conclusion.

A statement by the Philadelphia Archdiocese June 22 acknowledged the “difficult time for all Catholics” during the trial, especially for victims of sexual abuse.

“The lessons of the last year have made our church a more vigilant guardian of our people’s safety,” the statement said. “The Archdiocese of Philadelphia is on a journey of reform and renewal that requires honesty and hope. We are committed to providing support and assistance to parishioners as they and the church seek to more deeply understand sexual violence, and to create an environment that is safe and welcoming to all, including past victims.”

The statement said the archdiocese “offers a heartfelt apology to all victims of clergy sexual abuse. Now and in the future, the church will continue to take vigorous steps to ensure safe church environments for all the faithful in Philadelphia.”

The charge of child endangerment for which the jury found Msgr. Lynn guilty stemmed from the case of former priest Edward V. Avery, 69. Jurors declared, in effect, that Msgr. Lynn should have done more to prevent the abuse.

Before the start of the trial in March, Avery pleaded guilty to sexually assaulting an altar boy at St. Jerome Parish in Northeast Philadelphia in the 1990s. Avery was laicized in 2006 and now is serving two and a half to five years in prison.

The jury acquitted Msgr. Lynn of the charge of conspiracy with Avery and other archdiocesan officials and of a second child endangerment charge concerning the case of Father James J. Brennan, 48.

Father Brennan, who has not functioned as a priest since 2006, faced charges of attempted rape and endangerment of a child from an allegation also stemming from the 1990s. The jury declared it was hung on finding a decision on his case.

State prosecutors have not determined if they will retry his case before a new jury or drop the charges.

After each juror individually affirmed the decisions on the defendants, Sarmina dismissed them, then heard arguments on whether to revoke Msgr. Lynn’s bail and send him to jail.

Lindy and Bergstrom contended that their 61-year-old defendant, who never fled the area in 10 years despite two grand jury appearances and his months-long trial, posed no risk of fleeing or failing to appear for his August sentencing hearing.

“Of course he’s a risk for flight because of extradition to the Vatican,” Blessington countered. “His defense is wholly funded by the church. This man belongs in jail today.”

Sarmina essentially agreed to revoke bail, though she said she would consider house arrest with electronic monitoring until sentencing.

As defense lawyers for Msgr. Lynn discussed details of which family member’s home he might be confined to, a sheriff’s deputy gently led the priest to a side door out of the courtroom and within feet of his family and friends in the gallery, many of whom wept.

The faces of two priest friends of Msgr. Lynn were as grave as those of his family. Not even prosecutors showed emotion at the conclusion of the landmark trial.