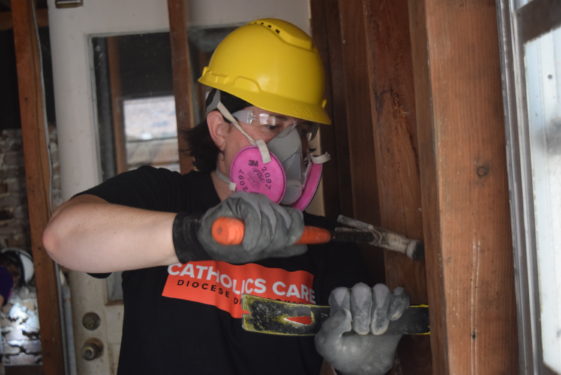 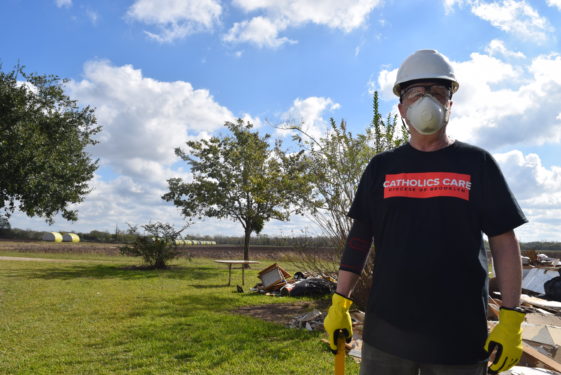 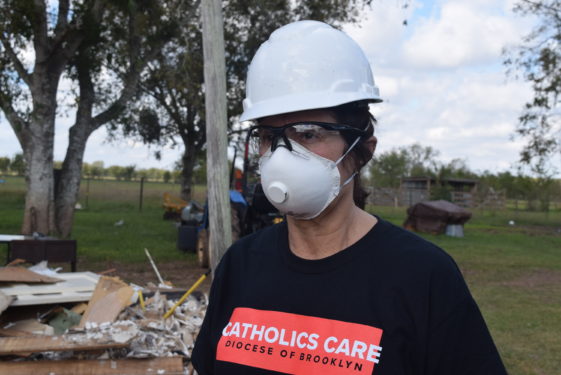 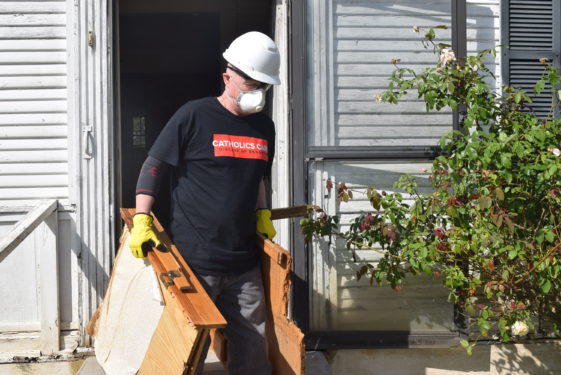 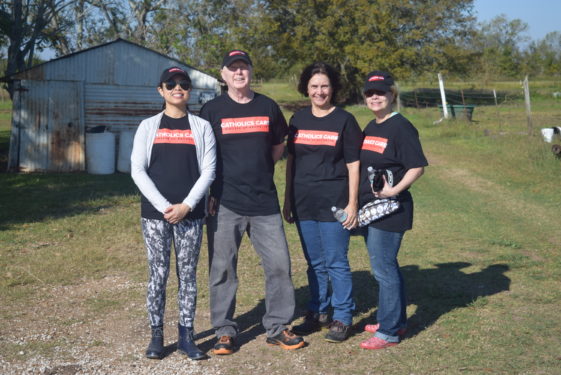 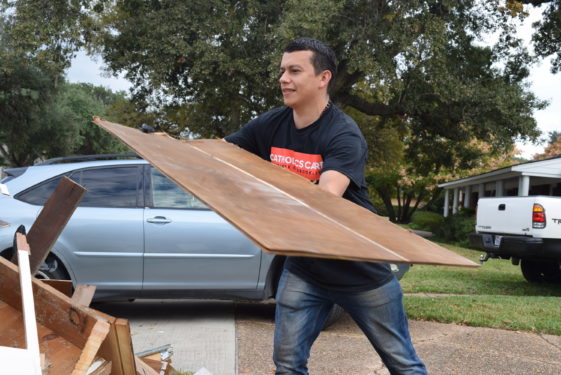 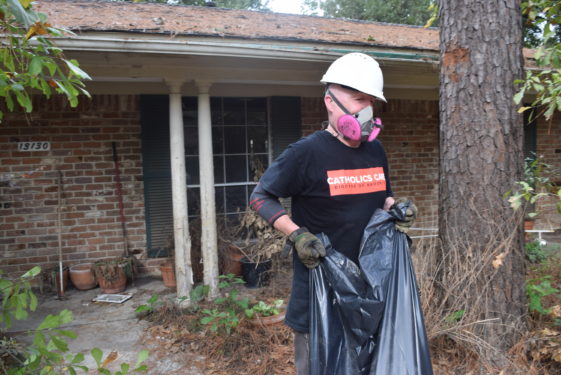 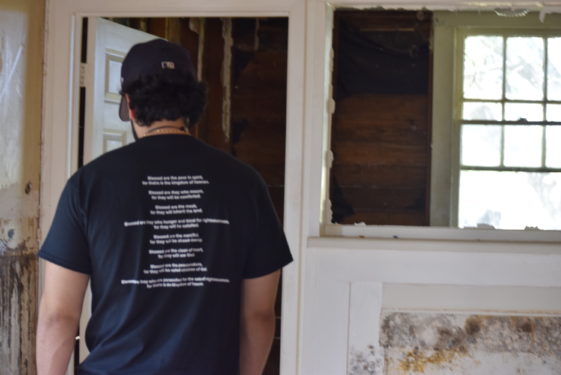 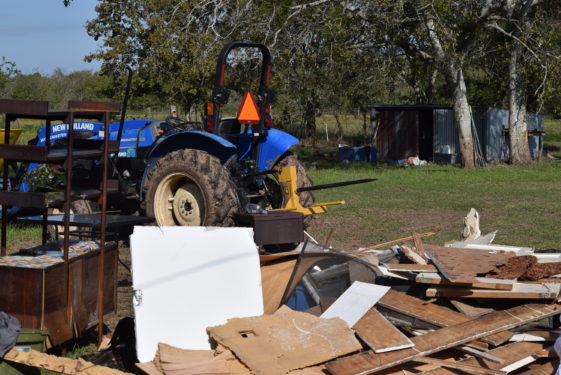 Yet, within the fabric of such progress exists a variety of discreet non-governmental organizations staffed by volunteers who are united under one cause: answering the call to help with the long rebuilding process.

“This storm really changed this county, this city,” said store owner Lane Tobolas. His business no longer sells gasoline because the floods ruptured the gas tanks. “It brought out some of the best components of who we are as a community and a state as far as people helping each other and the toughness of our people and the ability to survive and regroup and help each other and keep going. But at the end of the day when the dust settles, there’s still a lot of work to be done and there’s a lot of lives that have been changed in dramatic fashion.”

Whether it’s the 18 volunteers from Catholics Care from the Brooklyn Diocese, Catholic Charities from the Archdiocese of Galveston-Houston, Team Rubicon or All Hands and Hearts, every morning, volunteers suit up, usually in a uniform T-shirt and jeans, and take on the task of fixing the homes of the families that lost everything in the floods following Hurricane Harvey.

All Hands and Hearts’ Texas Response Volunteer Coordinator Caraleigh Birchler said her team and leaders thought very highly of the Catholics Care team and enjoyed the enthusiasm and work ethic they brought. 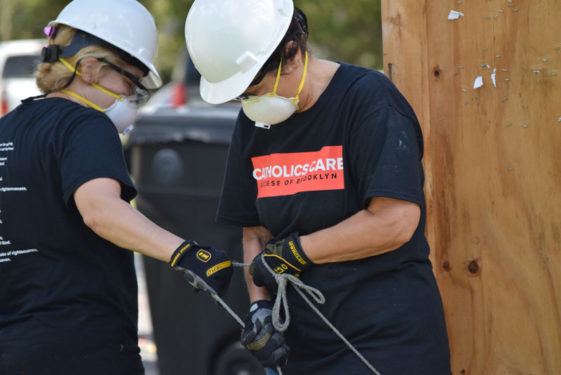 From Nov. 13 to 17, the Brooklyn volunteers, nicknamed “18 Special,” would become the hands and feet of hard labor in the Texas humidity and heat. Yet day after day, the average eight-hour shifts dared not to break their spirits.

The morning roll call started before 7 and usually by 7:30 the team – identified by their black T-shirts with “Catholics Care: Diocese of Brooklyn” designs – was in vehicles departing for the day’s assignment. The chatter in the SUVs was joyous, complaints on the most rare of occasions, replaced instead with group prayer sessions where together they shared smartphone screens with the day’s vespers, transforming the vehicles into mobile chapels of thanksgiving.

“The helping is not only when I’m out there you know drilling out a wall. The helping is also how I interact with the people I’m with,” said Tatiana Ramirez, a parishioner at St. Joseph’s Co-Cathedral in Prospect Heights. “I can come down here on my own and help out, but when you’re helping out with this foundation of faith, it makes it completely different because you see it as not only you giving of yourself but you giving God to this person. We see God in the other.”

For most of their time in Texas, the Brooklyn volunteers were paired with unfamiliar faces in unfamiliar homes in a city that they never visited before. But such a working environment didn’t faze them. Whether it was working on water- damaged homes where the main source of income is agriculture or on homes in well-off Houston neighborhoods, the Catholics Care team was willing to tackle as many tasks necessary to get the job done.

In the Greater Houston homes, they partnered with All Hands and Hearts, an international non-profit disaster relief organization. Five Catholics Care members worked under the direction of assistant team leader Hannah Locke.

“We could get paid $20 an hour to be doing this work and doing it selflessly is much more gratifying and rewarding,” said Locke. “You really get to know people on such a personal level and you’re creating friends all over the world. Bottom line is giving back to another community even though it hasn’t happened to you gives you a perspective on life that you could’ve never asked for.”

After a natural disaster, the community’s most vulnerable were looking for resources to try and piece their lives together. By Day 4, Catholics Care not only assisted in the rebuilding and cleaning of nearly 10 homes affected by the hurricane, but they traded their toolboxes for a day in the office.

They worked at Catholic Charities’ headquarters, doing tasks that ranged from calling clients who were facing eviction or having their electricity turned off, to organizing a filing system that was just as much in need of immediate assistance as the houses.

Rudy Guzman shared how his expectations for the trip changed from the moment he arrived in Texas.

“Sunday when we got here, I didn’t know what to expect,” said Guzman, a parishioner at St. Joseph’s Co-Cathedral. “I know that tomorrow, I’m leaving with no self-regrets. I left it all out there on the field and so I’m good with that.”

For Anna Rocchio, the hardest aspect about of the trip was realizing some of the homes she helped to gut out by removing pieces nail by nail, still are the only places some people will have to call home.

“It’s so emotional, it’s so much a part of you and it’s hard to put into words all the feelings that you received from the very first day in meeting Junior and hearing his story to meeting Ms. Rosie and hearing her story and seeing what she lives in, the conditions that she’s living in, it’s hard to describe,” said Rocchio, who attends St. Thomas More Church at St. John’s University.

After finishing their final tasks on Friday, the car ride home with the Catholics Care team still included chatter about gratitude, but this time it also had a discussion about muscle pain-relieving products for minor aches.

The final Texas sunset bid them farewell, the landscape quiet in comparison to the city noise they left behind. For homeowner Ms. Rosia, she now had a home she could transfer her son to – the same home her father lived in and passed down to her, the same home she lost her brother in not long after living within its walls congested with mold for weeks. The home is a lot emptier, rotten food tossed away, the odor of mold eliminated. For now, it will just have to do.