This April marks the beginning of the next half century of The Catholic Telemedia Network (CTN). Let’s call that Phase 5. For those who are curious, what follows is a description of Phases 1 through 4.

“Three Holes in the Wall.” That was the title of the first document that was sent to the administrators of diocesan schools in early 1966 to describe the innovative system now known as The Catholic Telemedia Network.

That document was the unofficial manual of how teachers would hook into the television network scheduled to unveil in March of that same year.

Only six months prior, the full scope of the project was presented to Bishop Bryan J. McEntegart, the fourth Bishop of Brooklyn. A 21-page report was prepared by Father Michael Dempsey, under the direction of the Superintendent of Schools, Msgr. Eugene Molloy, which described how the Brooklyn Diocese would build the transmission, school and studio infrastructures of one of the first diocesan TV systems in the country.

What is most remarkable is the timeline of the build. The seed was planted in June, 1964 when the diocese formally applied to the Federal Communications Commission (FCC) for licenses to these newly allocated frequencies. Western Union Telegrams were received from FCC Commissioner Ben Waple, who granted the diocese construction permits for the “new Instructional TV Fixed Stations.” A consulting body of private and public educators, civic leaders and local clergy assembled to make a strategic plan.

Construction was completed in schools, hospitals and administration sites, and the business of education began; thousands of Admiral brand television sets were delivered into classrooms, and teachers were trained so that they knew to which “hole in the wall” they should connect.

The first broadcast transmission of Educational TV (ETV) as sent from Bishop Ford H.S. in Park Slope on April 18, 1966 with over 220,000 students capable of watching. What followed in Phases 2 through 4 were hundreds of thousands of programs, many as full-year courses.

As ETV systems grew throughout school districts, an industry of educational producers arose, allowing for a more diverse library of material that could now be leased for air.

Phase 5 has now begun. TV sets have been replaced by computers and computers are being replaced by personal tablets. We look forward to an equally impressive future as diocesan teachers use CTN Internet-based services, Learn360, Mathletics and EducationCity, to bring the world into the classroom.

The digital learning services of CTN allow 24/7 access to instructional materials in and out of school. Each of our services is a tool for the 21st-century learner, enabling interactivity and collaboration as well as providing personal learning opportunities (differentiation.)

Join in our anniversary celebration. Visit ctnbq.org/CTN50 for more information about our 50 years in the classroom. CTN truly celebrates Catholic education! 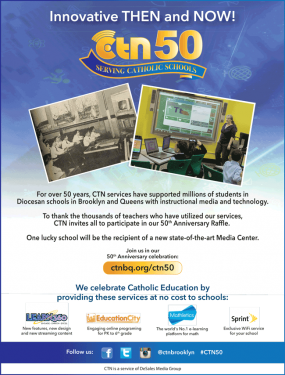