The 2012 state test results reported in the chart indicate that the majority of students in the fourth, sixth and eighth grade within the Diocese of Brooklyn are meeting or exceeding the state proficiency standards. Scoring at Level 3 and Level 4 are respectively considered meeting and exceeding state proficiency standards or “passing.”
When comparing the diocese’s 2012 performance on the New York State tests to the New York State and New York City test results (see chart), we notice that diocesan schools outperform the city public schools in English language arts (ELA) and math.

Outpacing Public, Charter Schools
Diocesan students also outpaced all public and charter school students in the state in English language arts. Diocesan results were slightly lower than the state’s performance on the math grades six and eight tests. However, diocesan results surpass the state on the math grade four test.
The diocesan passing average on the grade four math test rose to 71.0 percent, compared to 63.7 percent a year before in 2011. The greatest gain that the diocese attained in ELA was for grade six with a passing rate of 66.5 percent, higher than the diocesan 64.9 percent in 2011.
Beginning September, 2012, the N.Y.S. Common Core Learning Standards have been adopted and are being implemented in our schools within the diocese and throughout the state. According to the N.Y.S. Commissioner John B. King, the implementation of these standards are to support all our students to attain “college and career readiness.” 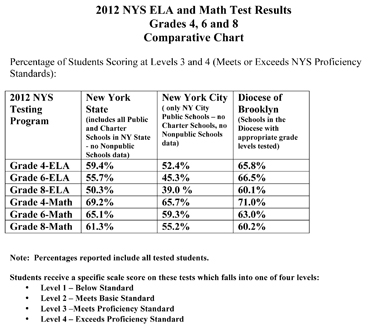 During the month of April, 2013, the ELA and math tests will be administered to diocesan students in fourth, sixth and eighth grades. For the first time throughout the state, student achievement will be based on the N.Y.S. Common Core Learning Standards. In addition, students in grades four and eight will take the state’s science test in May and June.
Looking to the future, the Board of Regents and the state Education Department are preparing the state’s education system for a transition to a computer-based testing program in the 2014-2015 school year as a way for students to be ready for college and careers.
The computer-based Common Core assessments are being designed to move beyond multiple-choice questions to technology-enhanced items to assess students’ higher order knowledge, skills and abilities.
The diocese will continue to implement the curriculum and assessment changes that will be instituted at the state level. Our teachers are committed to using the state test results to ensure that our students are meeting state standards and addressing the learning needs of our students at the local school level.
In addition, our diocesan 2012-2013 revised report cards also reflect the Common Core Learning Standards.

Diane Phelan is the diocesan associate superintendent for evaluation of programs and students.