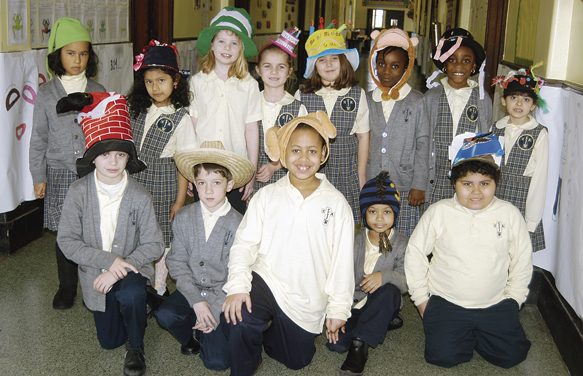 Last week was not the typical week at St. Joseph the Worker Catholic Academy in Park Slope.

Students attended school in pajamas instead of uniforms, donned wacky-looking hats and silly socks and even set aside a day to appreciate – yes, appreciate – their principal and teachers.

Though unusual for every other week of the year, these activities, along with an Open House, science exhibit, book fair and school Mass, were fitting festivities to celebrate Catholic Schools Week.

Special events were held throughout the week at Catholic elementary schools and academies around the diocese.

Not only was this St. Joseph the Worker’s first observance of Catholic Schools Week since opening as an academy last fall, but it was also a celebration of how far the school community and building has progressed in the last six months.

A visitor to the school late last August would have seen the main hallway and classrooms filled with a hodgepodge of furniture, books and miscellaneous supplies. As teachers tried to ready their classrooms, they navigated around painters on scaffolds and workers upgrading the electrical system.

Principal Robert DiNardo admits he was more than a little nervous about not being able to open on time. Yet, what could have taken months happened in a matter of weeks because of help from the diocese and what he calls “an army of worker bees” – his teachers and staff.

“It was an amazing transformation,” he said. “The teachers did a fantastic job getting the school ready.”

Walking into the main hallway today, a visitor is surrounded by a virtual winter wonderland. Gone are the straggle of boxes, books and furnishings. In their place are attractive handmade projects featuring chubby penguins, fluffy polar bears, dangling snowflakes and facts about the Arctic – a visual representation of climate studies recently conducted by the younger grades.

“Look around,” DiNardo said proudly. “We’re getting there. We’re on our way to having the building where we want it to be.”

Hallways and classrooms are newly painted and the floors shine. DiNardo is proud to have SMART Boards in every kindergarten through grade eight classroom, as well as in the art room, and have a SMART Table for the pre-k3 and pre-k4 classes. Students also have access to a computer lab, science lab and resource room.

As for the multitude of books, many have been organized into a book room for teachers, and others were donated. “Over the last two months,” DiNardo said, “we’ve given away more than 1,500 books to other Catholic schools in the diocese.”

However, there is still work to be done: The library is only half finished; the cafeteria needs to be painted; stacks of unpacked boxes remain; and the elevator needs repairs, which are scheduled for later this month. School computers must also be capable and ready for administering state tests within the next two years.

But DiNardo knows those are smaller matters compared to the big picture – providing the very best Catholic education to about 345 children who have been entrusted to his care.

DiNardo and three teachers are undergoing training at St. John’s University, Jamaica, to help develop the curriculum in the school.

The key is integrating the new curriculum while keeping students engaged. If you ask the students, that doesn’t seem to be a problem.

Perez and her peers, some of whom started their educational careers in the building and others who are newcomers this year, describe the school as “one big family.”

It is that sense of family, found in “caring teachers and friends,” that eighth grader Bridget Pynn will miss when she and most of her 29 classmates head to Catholic high schools this fall.

“It is a very welcoming community,” added librarian Karen Mulhern, who feels at home in her new school community. She says she commutes from Queens everyday for “the children” and the joy they get out of the books.

“You can’t have a faculty work harder than this one,” DiNardo added. “It’s amazing how much time and effort they put into making a great environment for the children.”