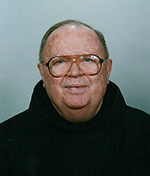 A Mass of Christian Burial was celebrated March 2, at Our Lady of Angels Church, Bay Ridge.

He received the Franciscan habit in 1953, taking the name Emmett and was professed in 1955. He attended St. Francis College, Brooklyn. He also earned a master’s in library science from Columbia University and his doctorate in media studies from NYU.

He also was librarian and teacher at St. Anthony’s H.S., Smithtown, and returned in 1974 after serving two years at St. John’s University.

In 1977, he became associate professor of St. John’s University Graduate Division of Library and Information Science and was its director from 1989 to 1994. Before retiring in 1995, he was graduated to full professorship.

Brother Emmett was a council member of the Catholic Library Association, 1989-91.

An active member of the New York Irish History Roundtable, he became president in 1994. During his tenure, he hosted Mary Robinson, president of Ireland, at a symbolic meal commemorating the 150th anniversary of the Great Irish Famine.

He is the author of The History of the Franciscan brothers of Brooklyn in Ireland and America that was pub- lished by St. Francis College and the Franciscan Brothers.

He moved to Our Lady of Angels Friary, Bay Ridge, in 2001. Illness forced the move to Augustana.