Inside the vestibule of St. James Cathedral-Basilica in Downtown Brooklyn hangs a large plaque that most people walk past without giving it a second thought.

Some might notice the words: “Immaculate Conception Day Nursery, Founded 1893,” or pause to scan the names of the hundreds of diocesan women and men listed there.

Those people and their good works have all but been forgotten, except in yellowed newspaper articles, diocesan history books and in rare cases, the memories of those still able to recall that time.

Mrs. John T. Gallagher is one of the women listed on that plaque. Today, she is better known as Mary Kay Gallagher, who runs an elite real estate business from her Victorian home in Prospect Park South.

Gallagher had the distinction of serving as the last president of the Board of Managers of the Immaculate Conception Day Nursery (ICDN), and at age 95, she believes she may be the last living member of that Catholic women’s group.

As noted in an April 3, 1963 article from The Tablet, ICDN was founded at 155 Sands Street by a small group of Catholic laywomen at the request of Brooklyn Bishop Charles E. McDonnell. 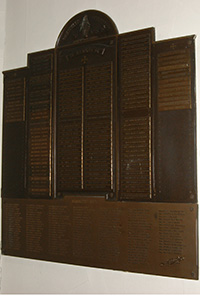 The first of its kind in the then-City of Brooklyn, it was “designed to keep the family together by establishing a daycare program in congested areas. … it permitted a needy mother to seek employment knowing her children would be well cared for and united with her at the day’s end.”

“The children got wonderful care and wonderful food,” Mary Kay Gallagher recalled. “We were helping parents who went to work … and it was free. They didn’t pay anything.”

Gallagher was impressed with the daycare program when she began her affiliation with it in the 1960s.

In 1968, ICDN had 72 children, ages three to eight, in the care of 12 teachers and a social worker under the direction of Elizabeth M. Balfour.

Though Gallagher had little contact with the children, she visited the facilities near the Brooklyn Navy Yard when the Board of Managers held its monthly meetings.

Dozens of diocesan laywomen comprised the board, and membership was by invitation and election only. Gallagher was asked to join by her friends, Virginia B. Trum and Helen Kavanagh.

“A lot of them were very prominent, well-known Catholic women and I was in big company,” she said. “I was the insignificant one.”

Like her cohorts, Gallagher’s main responsibility, first as a member and then president, was aggressive fundraising to keep the nursery as a free service for working families.

“The biggest event we had was a luncheon at the Waldorf-Astoria on Easter Monday. That was standard for years. Our children, our daughters … would work at selling chances and helping out at the event. That was how they were introduced to charitable work.”

Today, Gallagher’s daughter Joanne M. Oplustil, who volunteered at those luncheons, continues her mother’s charitable legacy as president and CEO of CAMBA, Inc., a New York-based nonprofit dedicated to helping youth and families.

Charity came easily to Gallagher, a Philadelphia-born Catholic and Rosemont College, Rosemont, Pa., graduate. She moved to Brooklyn when she married her husband John, a third-generation funeral director in Holy Cross parish, Flatbush.

When their six children were school age, she became involved in charitable work in her community, including serving on the guild for St. Charles Hospital for Children, Brooklyn Heights. After learning about the day nursery, she didn’t hesitate to lend her support.

“I had a lot of satisfaction from helping people,” she said.

Today, she keeps in touch with church activities in various ways, especially through weekly Communion visits from her friend, Father Michael Perry, pastor of Our Lady of Refuge, Ditmas Park.

And until recently, Gallagher kept every paper dating back to her ICDN days, including a 1952 lease between the nursery and the N.Y.C. Housing Authority for use of the childcare center at the Farragut Houses. The rent was $1 per year.

Earlier this week, she gifted all of her documents to the Brooklyn diocesan archives for safe keeping.

Shortly after its founding, ICDN moved to a house at 117 Sands Street, where it operated for nearly 50 years until the city condemned the property to make way for the Brooklyn- Queens Expressway. In cooperation with the N.Y.C. Housing Authority, the nursery relocated to the Farragut Houses, 32 Navy Street, in 1952.

Similar day nurseries opened for Italian children at 47 Front Street in July, 1894, and in the parishes of St. Joseph, Prospect Heights, 1896, and St. Cecilia, Greenpoint, 1904.

Under Bishop Thomas E. Molloy, more day nurseries opened at St. Thomas Settlement, Kent Ave.; in the parishes of Our Lady of Loreto, St. Finbar, Our Lady of Grace, Our Lady of Czestochowa, Our Lady of Peace and Our Lady of the Rosary of Pompeii; and in Jamaica.

Eventually, the nurseries fell under Catholic Charities’ supervision and admitted children of any race, color or creed on the basis of need, and offered medical and case services. In the 1960s, many programs closed due to changing times, tensions in race relations, increasing costs and an inability to meet required standards.

Facing these issues, ICDN’s board voted to discontinue operations in June, 1969, but the charity continued. In 1971, the board donated $15,000 toward a dental clinic for the mentally disabled in the former St. Charles Hospital, Brooklyn, which has since closed.

A decade later, the board decided to disband but the names of its members are immortalized on the plaque at St. James Cathedral. Gallagher hopes passersby pause to read the names and say a prayer for the women and men who cared for Brooklyn fam- ilies so many years ago.