Four days after a deadly earthquake struck central Italy, prayers for the victims and their families were offered inside Brooklyn’s oldest Italian church.

Candles illuminated an Italian flag near the altar of Sacred Hearts-St. Stephen Church in Carroll Gardens where more than 150 people gathered Aug. 28 for a 7 p.m. votive Mass of the Sacred Heart of Jesus, celebrated in English and Italian.

The 6.2-magnitude earthquake hit a mountainous region of small towns and villages on Aug. 24, killing at least 291 people according to the Associated Press, injuring hundreds and reducing many centuries-old buildings to rubble.

At Sacred Hearts-St. Stephen Church, “The reaction has been one of great concern and a sense of wanting to help,” said John Heyer II, pastoral associate, who recently returned from a summer trip to Italy.

Most parish families do not trace their heritage to the quake-affected regions, Heyer said, but “they come from towns just like those: 2,000 people in a small, hillside mountain area with one road in and one road out. They relate to that kind of scenario.”

People in the community still recall the devastation caused by other earthquakes on the Italian peninsula in recent years, including the 2009 tremor near the city of L’Aquila that claimed more than 300 lives.

News of the latest quake spread quickly through the community, and people did the only thing they could do: pray. In the aftermath of the quake, people met in church to pray the rosary and Masses were more crowded than usual.

At the request of his parishioners, Sacred Hearts-St. Stephen’s pastor, Msgr. Guy Massie, organized Sunday’s Mass to pray for and show “solidarity with our brothers and sisters in Italy,” he said.

“Prayer unites us to God, and God unites us to them,” said Msgr. Massie, who was the main celebrant of the Mass. Father Michael Tedone, parochial vicar at St. Bernard Church, Mill Basin, concelebrated.

Clergy and the faithful called upon Italian saints, including Francis of Assisi, Catherine of Siena and Anthony of Padua, to intercede as Italy recovers from this natural disaster, and finds the grace to move forward. A collection was taken that will be sent through the Brooklyn Diocese to support relief efforts.

All parishes in the diocese will hold a special collection at Masses on Columbus Day weekend, Oct. 8-9. 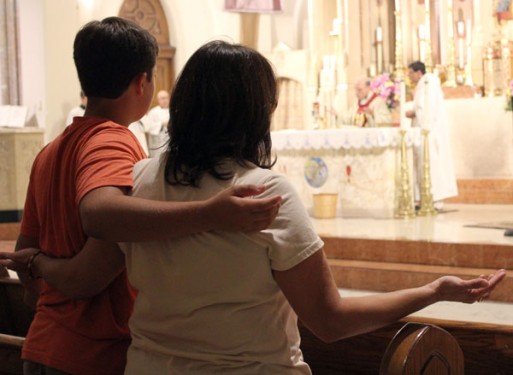 In addition to parishioners, the congregation was comprised of visitors, including Assemblywoman Jo Anne Simon and members of Msgr. Massie’s former parish, St. Andrew the Apostle, Bay Ridge. Men from the Van Westerhout Cittadini Molesi Cultural and Social Club, who are active in the parish, were also present.

The Molesi Club is planning a fundraiser for the affected region on Saturday, Sept. 10, at noon at the society’s clubhouse on Court St. and Fourth Pl. in Carroll Gardens.

Rosaria Mancini of St. Patrick Church, Bay Ridge, attended the evening Mass with her husband, and their two daughters.

“I heard a story where a father was separated from his wife and children. As a mom, I can’t imagine being in that situation.

“It’s not enough to say, ‘We feel so badly for those people.’ We need to say, ‘What are we doing about it?’ As Catholics, we believe prayer and action are needed,” she said.

“Hopefully today, and in the days that follow, people in Italy will realize there are people that care for them.”

Though the earthquake did not affect her family in Italy, longtime Sacred Hearts-St. Stephen parishioner Lucia Piro empathizes with the suffering endured by the families that lost everything, even each other.

“I couldn’t imagine the loss of everyone in my family. Nobody ever should,” she said.

Not only does she mourn the great loss of life in the quake-affected region, but also the loss of art and architecture dating back as far as the Middle Ages and Renaissance.

She knows the recovery effort will take time, but with prayer and assistance from local charities, she believes there is hope.

“As usual, the Italians will overcome. They always do. And with our prayers, it will be done faster,” she said.