MANHASSET, N.Y. — At first, it seemed like the perfect day for a golf outing. The skies were blue, the sun was shining, and the weather was just right, but Mother Nature was about to serve up a surprise.

Friends and faithful were at North Hills Country Club on July 21 for the 27th annual Bishop’s Golf Classic, which raises funds and awareness for charities that support the mission of the Catholic Church in the Diocese of Brooklyn.

This year’s beneficiary is Cristo Rey Brooklyn High School, which partners with families to “educate deserving young people from underserved communities to become men and women of faith, purpose, and service.”

Hours after enjoying breakfast and teeing off, golfers made it past the front nine holes when all “hail” broke loose.

The winds kicked up as sheets of rain started falling, sending the golfers scrambling for shelter.

Mike Karff, senior sales executive at Richner Printers, recalled being out on the course and the frenzy that ensued when the rain started.

“It was chaos. I was among the first in,” Karff said. “I basically got stuck by the outside bar and sat there with two caddies and a groundskeeper for over an hour.”

While the golfers were clamoring to seek shelter, the thunder roared as two trees were hit by lightning and burst into flames just 140 yards from the golf club patio. 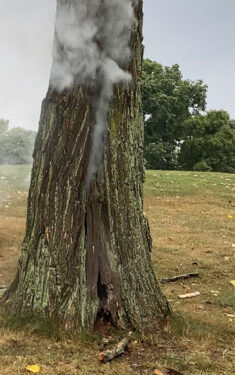 Karff said that when the thunder struck, he could feel the earth shake beneath him.

“The caddies and I just hugged each other,” he said. “It was the loudest noise I’d ever heard and the brightest light I had ever seen in my life.”

Inside the club, a third boom shook the structure as a young worker dove under a table, fearing it was a gunshot. All power was lost at the country club. The golfers who eventually made it back to the lockers had to feel their way through the darkness, searching for their belongings.

Additionally, a fire broke out in the club’s kitchen, forcing management to cancel the planned cocktail hour, dinner, and awards presentation.

Over the past 26 years, the Bishop’s Golf Classic, which is sponsored by DeSales Media, the ministry that produces The Tablet, has raised more than $1.7 million.

Bishop Emeritus Nicholas DiMarzio is this year’s clerical honoree, and Robert B. Catell, the former chairman and chief executive officer of KeySpan Corporation and KeySpan Energy Delivery, is the lay honoree. Catell also serves as chairman of the board of Cristo Rey Brooklyn High School.

​​While the July 21 outing was a washout, Bishop’s Golf Classic is being rescheduled for August 22 as a nine-hole tournament followed by a cocktail hour, dinner, and awards ceremony.