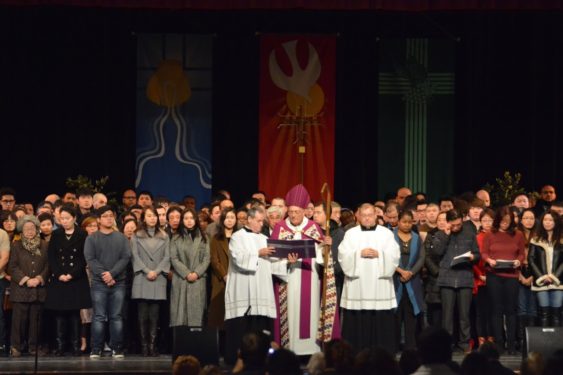 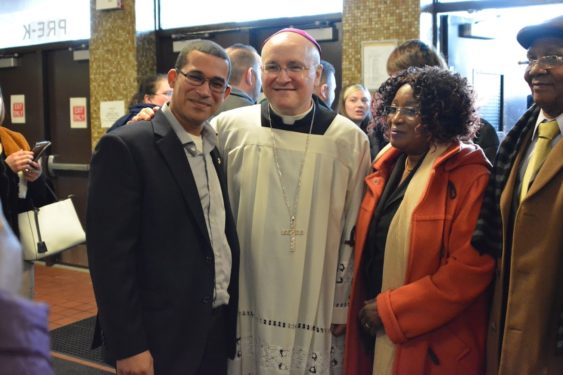 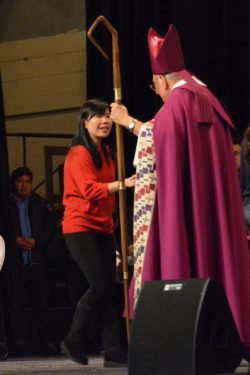 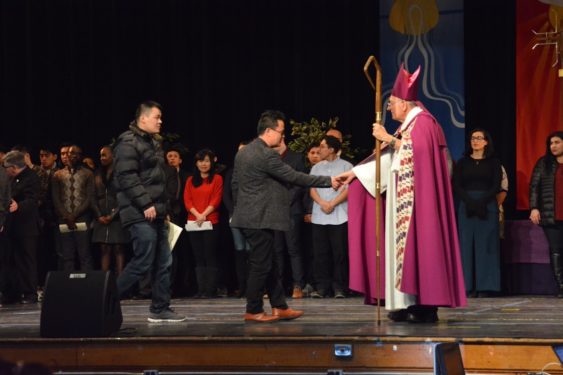 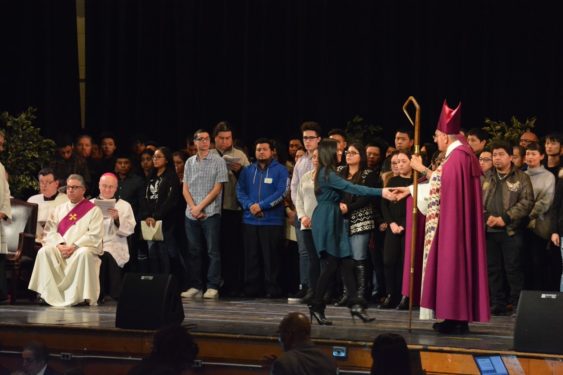 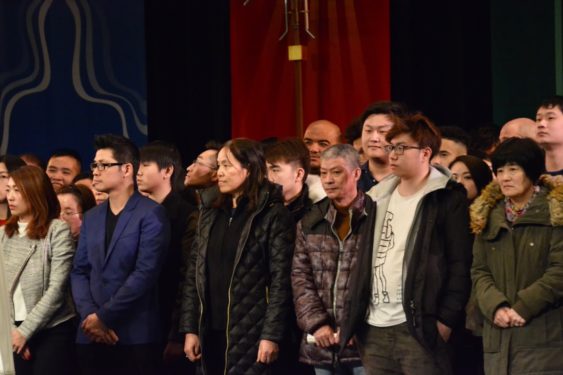 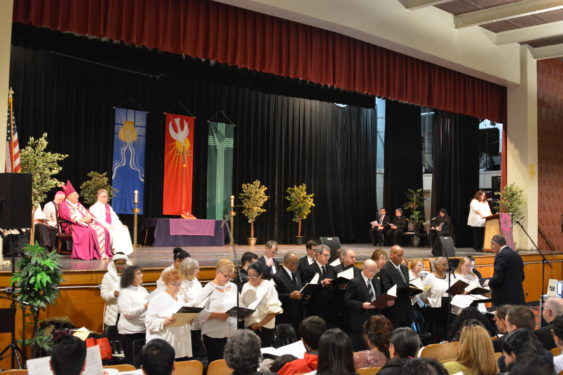 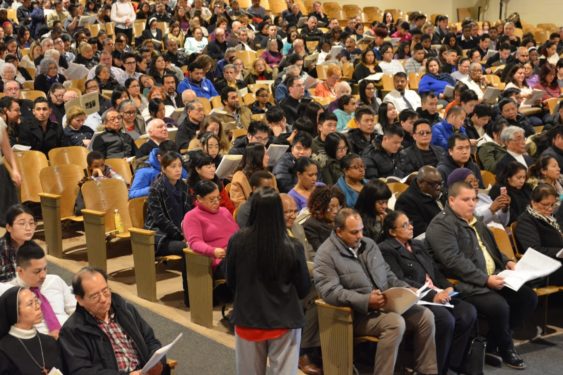 Kemar Newman smiled as he shook Brooklyn Bishop Nicholas DiMarzio’s hand during the Rite of Election on the First Sunday of Lent.

The 26-year-old from Our Lady of Light parish, St. Albans, is one of 443 adults who took part in the diocesan ceremony at the former Bishop Ford H.S., Park Slope, on Sunday, Feb. 18.

Never baptized in any Christian tradition, these catechumens – as they are called – are enrolled in the Rite of Christian Initiation of Adults (RCIA), and will enter the Church at the Easter Vigil, March 31, in their home parishes.

Ceremonies for candidates – those baptized in another Christian faith – celebrating the Rite of Call to Continuing Conversion, and declare their desire to join in full communion with the Catholic Church, will be held Feb. 25.

The Rite of Election kicks off a period of more intense spiritual preparation for those preparing to enter the Church.

During the ceremonies last Sunday, each of the catechumens were called by name and personally greeted by Bishop DiMarzio. Their names were presented to the bishop, and with their sponsors for approval, he officially accepted them to be admitted to the sacraments this Easter.

This year’s catechumens represent 102 diocesan parishes, with the largest numbers coming from immigrant communities at Our Lady of Perpetual Help, Sunset Park, and St. John Vianney and St. Michael, both in Flushing.

While English was the native tongue for some at the ceremony, for others, it was Spanish, Mandarin, Cantonese or Korean.

“It’s such a beautiful celebration,” said Joann Roa, diocesan director of adult faith formation, who coordinates the RCIA. “It’s awe inspiring for me seeing so many people from all walks of life.”

Being able to shake hands with the bishop was a nice moment for Newman, who grew up as a Pentecostal, but didn’t have good experiences in churches he attended.

For many years, “I felt a calling to the Catholic religion,” he said, “but I ignored it.”

He first felt the call during boot camp with the U.S. Marine Corps and again driving past a Catholic church near his home. The third time was on a random morning, and it was then that he decided to walk through the door Jesus had opened years earlier.

Not only is he seeking to enter fully into the life of the Church for his own spiritual benefit, but also for that of his two-year-old twin daughters.

“I need for them to see that there is a higher power and to have faith,” he said.

Addressing the catechumens, the bishop said, “We are enthusiastic today as the Church in Brooklyn and Queens because we see how important this movement is in your life and how much you will add to the faith of our Church together.”

In his homily, he spoke about the covenant each of the soon-to-be baptized will make with God at the Easter Vigil.

Resisting sin then becomes an ongoing spiritual battle, he added, warning the elect against the four Ds of the devil: deception, disunity, diversion and discouragement.

Explaining that these are the same temptations Jesus faced in the desert, the bishop said that just as Jesus overcame them, so too can all who trust in the power of God.

“Although temptation and sin abound, grace is much more powerful, and the grace of God that you will receive at baptism will save you from any sins to come,” he said.

The Grace of God

God’s grace is what brought Yajaira Brown of All Saints parish, Williamsburg, and her husband Timothy before the bishop that afternoon.

While Timothy has spent many months preparing to receive his sacraments, Yajaira has spent more than a decade praying for him to take this step in his faith life.

“I believe in prayer,” she said. “When you pray, you only need to wait. When it is time, He will do the rest.”

Married civilly for 12 years, the couple looks forward to convalidating their marriage at All Saints this fall.

“It’s fantastic,” added their daughter, Emma, who is preparing to receive First Communion this year.

Timothy says that he studies alongside his daughter, and prays with her, his wife and son every night. They go to church as a family every Sunday now.

Raised Christian, Timothy said he intended to be baptized at some point. When his wife came to him with the idea, he knew it was “a sign from God.”

Meanwhile in Mill Basin, newlywed Carol Kauffman credits her husband Joseph with helping her take the steps needed to achieve “a full relationship with God.”

“This has been an ongoing journey for me, something I’ve wanted to do for a long, long time,” Carol said. “I got side tracked with life and its burdens and never had the commitment or focus, or really the privilege to do this.”

Growing up in a Jewish-Christian household, her family observed the holy days of both religions, though sometimes, her mom took her to church for holidays.

“I always felt a spiritual connection there, but it wasn’t deep enough,” she said.

On her own at age 19, she struggled to go to school, find a career and make ends meet.

During that time, she said, “I knew God was real and God was there, but I never focused on Him. I focused on surviving.”

By the time she met Joseph, she was already interested in becoming baptized.

And Joseph’s support has been unwavering on her journey. He goes to RCIA classes with her and they attend Sunday Mass together at their parish, St. Bernard.

Carol said listening to the way Deacon Frank D’Accordo and Father Michael Tedone explain the faith has taught her so much – and she knows there is much more to learn.

“This is a gift I’m getting,” she said of her growing faith. “I want to continue, and I ask God to keep me on the right path.”