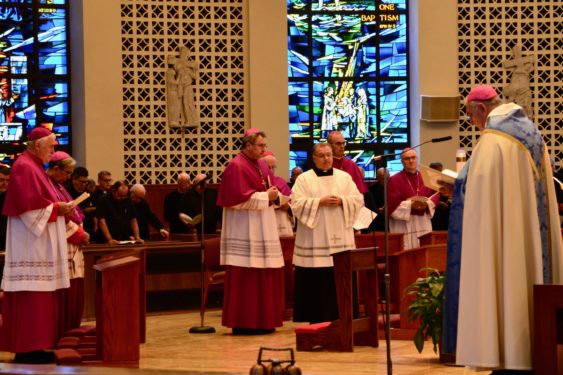 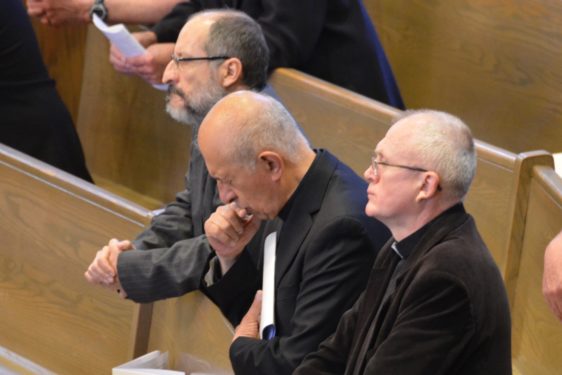 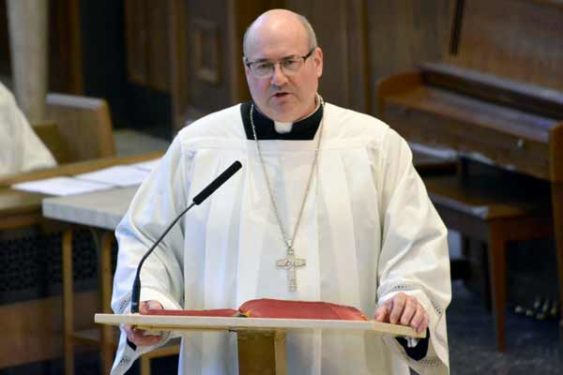 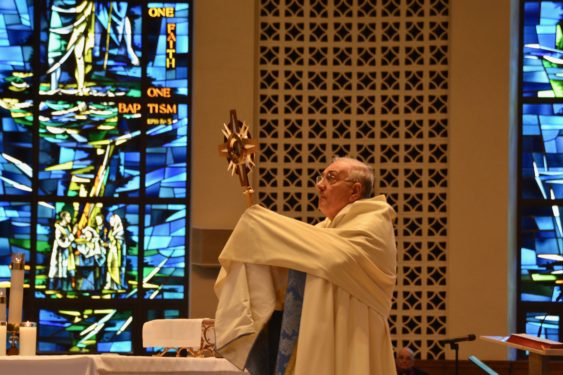 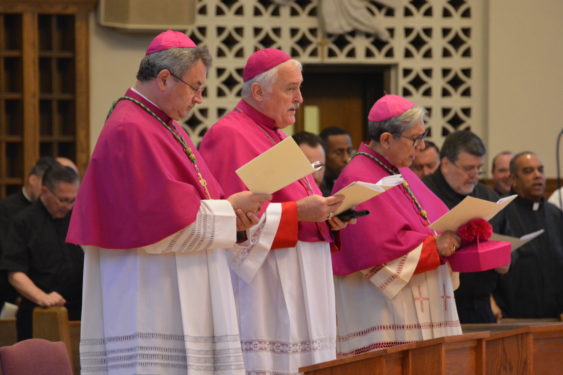 Bishop Nicholas DiMarzio, the six auxiliary bishops and 130 priests of Brooklyn and Queens participated in a Prayer of Repentance and Sanctification of Clergy on Friday, June 8, at Immaculate Conception Center, Douglaston.

Bishop DiMarzio had announced the service in his Chrism Mass homily earlier this year during Holy Week.

The two-and-a-half hour prayer service, held on the feast of the Sacred Heart of Jesus, was divided in two parts, penitential rite and eucharistic action.

During the first part – the Confession of Sins and Asking For Forgiveness – a different bishop read aloud about eight groups of sins: sins of cynicism, pride, sins against poverty, against chastity, against obedience, sins of racism, sins of inaction or indifference and sins of sexual abuse against minors.

After each reading, there was a time of silence and reflection. During the service, four priests heard personal confessions in different places of the circular chapel. Bishops in their episcopal garb knelt for confession as did many of the priests present at the service.

The second part started with the eucharistic hymn composed by St. Thomas Aquinas “O Salutaris Hostia” and then Bishop DiMarzio incensed the Blessed Sacrament in the monstrance on the altar.

After reading a passage of the Gospel of St. John, Bishop-elect Richard Henning, director of Sacred Heart Institute, gave his homily.

“This feast of the Sacred Heart is a beautiful feast for priests, really for everyone, for us,” said Bishop-elect Henning. “I consider this feast something of a feast of intimacy, the intimacy that exists between the Father and the Son and the Holy Spirit; the intimacy into which we are invited by our Lord Jesus.

“And the Gospel of John particularly, is the Gospel of that intimacy. One of its most important images is the image of the beloved disciple leaning at the Last Supper against the chest of Jesus,” he said.

The bishop-elect didn’t center his homily on the sins and shortcomings of priests, but on the essence of priesthood and the love of the Lord.

“In this chapter, chapter 17, Jesus is praying for His disciples. And in a very real sense not only those disciples that were there in that moment, but all those yet to come. It is a kind of terrible beauty this prayer of Jesus, because this is just before His passion. And the disciples for whom He prays are the very ones that He knows will betray Him and deny and abandon Him. And yet nonetheless He prays for them to the Father. It is an act of powerful love and of intimacy. He prays for them even in their weakness.

“He prays that they may be consecrated, and in fact, that they be holy. I think that in our culture if you ask most Catholic faithful what is holiness, they would tell us about doing good works, and that is a part of holiness. But in the Biblical conception, consecration, holiness, is rather being set apart, set aside, dedicated, given over to some good purpose,” said the newly named auxiliary bishop of Rockville Centre.

That concept of consecration is the foundation of a priest’s life, the homilist said, as he explained it with a concrete example.

“Many of us were given beautiful chalices at our ordinations. And people would be scandalized if we brought those chalices down for breakfast and put a cup on coffee in them or to share a beer at the end of the day. People would say, ‘That’s terrible, you can’t do that, you can’t use the chalice for that purpose.’ The chalice is set apart, is consecrated, it is to be filled with nothing less than the things of God.

“This is precisely what the Scriptures mean when they speak of holiness, consecration. The chalice is holy not so much for what it does, but for what it is and what it fills it. And if we, as Christian believers, disciples and priests, have been consecrated, set aside, then you and I are to be filled with nothing other than the things of God.

“This is why He prays for us. This is why He has set us aside for the service of the Church as people of God, for us to be filled with the holy things of God. For us to stand at the altar, and to be able to say in truth, ‘This is my Body, given for you. This is my Blood,’ said Bishop-elect Henning

The booklets for the prayer service didn’t read “Bishop-elect” but Rev. Msgr. Richard Henning. The public announcement of his selection for the episcopate was made just a couple of hours before the prayer service.

“When the nuncio told me that it was going to be announced today, I went to my bishop and said, ‘I have to keep my commitment to Brooklyn.’ And he agreed this was important so I was happy that it was able to be possible,” said Bishop-elect Henning after the service.

Asked about his first reaction to the news he would be bishop, he answered: “The first thing I did after talking with the nuncio was go to my confessor. So I appreciate the chance for that process of repentance and knowing the grace of the Lord. It is for me a great, great privilege to be here today, I am so grateful. And I don’t think I could spend the day any better than this.”