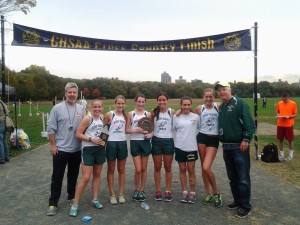 The Kearney Tigers took the overall championship by defeating Archbishop Molloy H.S., Briarwood, and placing four runners in the top-10.

The two other students who finished in the top-10 were Kailey O’Grady (sixth) and Kaitlen Monahan (10th).

Theresa Gallagher joins her sisters Kerri (2006) and Mary (2008) as winners of the sophomore cross-country championship.